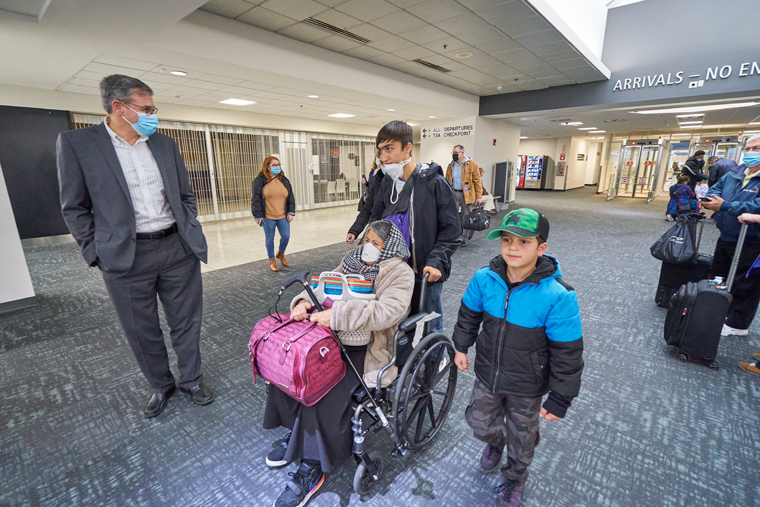 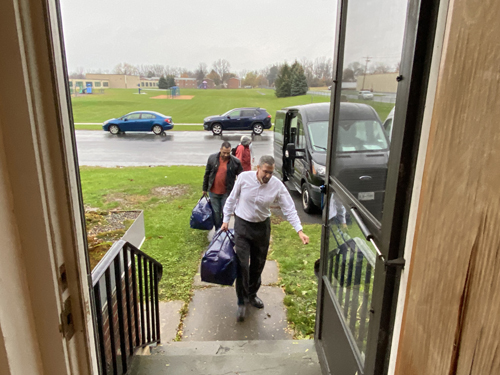 It’s “all hands on deck” to unload the family’s luggage at St. Margaret’s.

On the afternoon of Thursday, Nov. 18, Catholic Charities of Onondaga County Executive Director Michael Melara and Chief Financial Officer Lindsay Cronkright are positioned outside the doors of the Arrival Gate at Syracuse’s Hancock Airport. A few other staff members, an interpreter and—most notably—a TV video camera are nearby.

“Who’s coming in?” and similar questions are asked by others coming through the gate, expecting a reply that names a celebrity or two. They almost look disappointed to learn that the reception is for Afghan refugees, but the excitement that Melara, Cronkright and their team bring to the occasion dispels any notion of failed expectations.

“Today, we are living the Gospel,” proclaims Melara. “The Gospel talks about welcoming the stranger and today we have empirical evidence of welcoming refugees to our community. … We are here to greet them.”

While these are not the first Afghan refugees Catholic Charities has welcomed to the area, they are the first to enjoy the benefits of a partnership between Catholic Charities and St. Margaret’s Parish in Mattydale. Together, they are assisting the Afghan men, women and children caught up in the American troop withdrawal from their homeland. 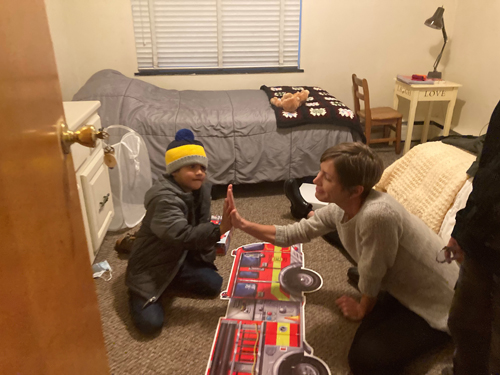 CCOC Chief Financial Officer Lindsay Cronkright shares a high-five with an Afghan boy she has introduced to board games at the former St. Margaret’s convent in Mattydale.

“This was about the same time we saw our troops withdrawing from Afghanistan, and like so many Americans, our hearts were moved and really saddened by the situation, and we all wanted to help,” according to Father Christopher Celentano, recently named pastor of St. Margaret’s and pastor of St. Rose of Lima Church in North Syracuse as well.

Father Celentano explained that as the Afghan withdrawal was developing, the convent at St. Margaret’s was in transition.

“When I came there were plans in the works to relocate the Sisters who were going to be moving to a different convent, and we were talking about what to do with our building,” explained Father Celentano. He had heard from Melara that they were looking for an old rectory or convent that could temporarily house different-size groups.

“So, I brought it to our trustees, and brought it to prayer … and we had discussions of what it would look like if we were to host refugees.” Catholic Charities staff and parish volunteers worked diligently to clean and prepare the facility and “it came together” according to Father Celentano.

The convent now serves as temporary housing designed to serve singles or families, whatever is needed, as they are prepared to move into permanent housing. Refugees are housed on military bases until they are released and welcomed by facilities like St. Margaret’s. 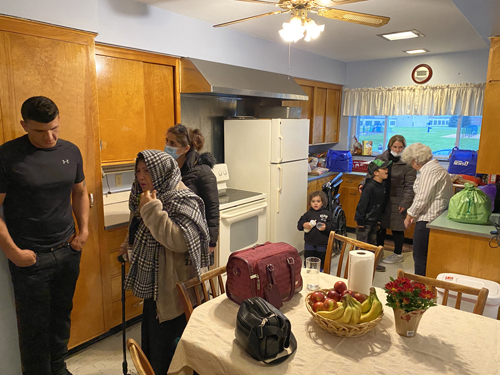 The Afghan family—mom, dad, grandmother and three children in all—enjoy meeting new friends in the kitchen of their temporary home.

Father says that it is necessary that these refugees “have a place that is welcoming for them, to welcome them to our community and that they have a roof over their heads, and they have support.” He adds that “we want to be Christ to them … and we see Christ in them.” Asked about the parish’s plan of action he says, “It’s going to evolve as time goes by, but if it’s just simply being able to provide them with food, supplies, a presence … a smile … we are going to do what the Lord leads us to do and whatever the situation dictates. Right now, it’s providing a place to welcome them.”

Catholic Charities has welcomed about 160 refugees so far to the area and expects the total number will exceed 230 before the program winds down. Melara adds that the ongoing story, though, is not about Catholic Charities.

“It’s about Afghans who have shown a tremendous capacity to survive and move forward with their lives and we are totally privileged to be part of that journey with them. They are the story; they are truly remarkable.”