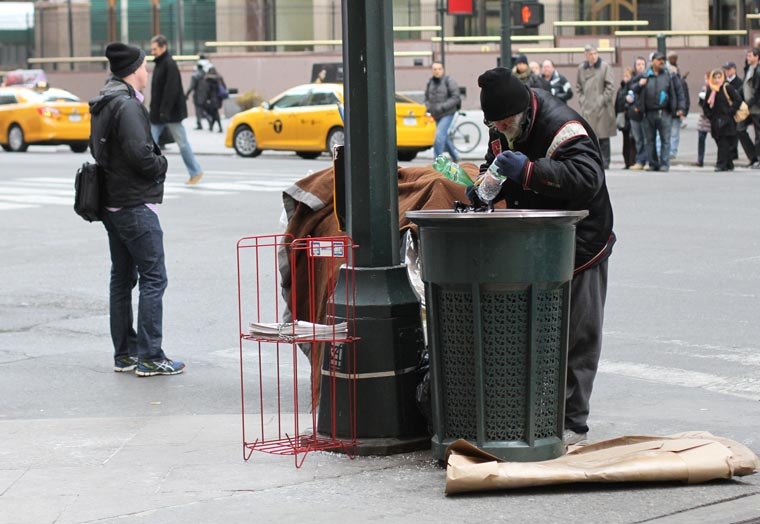 VATICAN CITY (CNS) — Harsh criticisms meted out by Pope Francis on free-market capitalism have sparked backlash from some fiscal conservatives and have led some people to call him “anti-capitalist” or even Marxist.

Ahead of his apostolic visit to the United States in September, some are bracing themselves for more criticisms from the pope, this time directed specifically at the U.S. culture and economy.

Joseph Kaboski, a professor of economics at the University of Notre Dame and president of CREDO, an international organization of Catholic economists, said, “As an individual, the pope probably views redistribution programs as a more effective way of tackling poverty than economic growth,” though “most mainstream economists would disagree.”

In addition, he said, the pope would probably “like more government involvement in the economy than many Americans would be comfortable with.”

However, Kaboski said he views the pope “as neither pro- nor anti-capitalist, but instead a measured critic.”

Kaboski said he is “confident Pope Francis finds much to commend” in U.S. economic life, such as private property, the entrepreneurial spirit, human creativity, technological advances, the way it creates jobs, income and products, and the way charities, government and the private sector pitch in to provide services to those in need.

At the same time, the pope “would also criticize the vast disparities in income and wealth … point to the poor in the inner cities, and argue that they are not fully participating in society,” Kaboski said. In addition, the pope would “point to the fact that the global economic crisis started in the U.S. financial sector and wound up shaking economies of many poor nations,” he said.

Kaboski said he is “very excited” about the pope “emphasizing the needs of the poor, but then if he talks about the roots of the financial crisis, it’s hard for me to fully go along with his confidence because academic economists are still debating the root causes of the Great Depression.”

“There are some statements (he makes) that can leave people scratching their heads,” he conceded.

However, it is important to keep in mind that the pope is “never teaching economics,” added Kaboski, who is also a consultant for the U.S. bishops’ Committee on Domestic Justice and Human Development. Rather, the pope is “catechizing on how our Christian view ought to impact our view of a good economy and society.”

Christians are called to evaluate economic activity through the lens of their relationship with God and others, which must be central to their lives, he added.

In homilies and at various audiences throughout his two-year pontificate, Pope Francis has sought to raise awareness and inspire action that would narrow the imbalances between the world’s rich and poor. He has criticized the current global economy, which is says is based on a “throwaway culture” that encourages consumption and waste, and marginalizes or even discards people seen as economically unproductive.

His main criticisms of “unregulated capitalism” are spelled out in his apostolic exhortation, “The Joy of the Gospel,” which calls people to turn from the idolatry of money and indifference to the needs of the poor. The economy must be based on the primacy of the person, honor human dignity and care for the poor, especially by including them in the economy, he said.

Pope Francis’ encyclical on the environment, “Laudato Si’, on Care for Our Common Home,” took up the same themes and extended his reflection to the devastating impact of the throwaway culture on the environment and on the poor who live closest to nature and rely most heavily on the land for their livelihood.

“This is related to what the pope has been talking about long before the environment: lifestyle,” said Greg Burke, senior communications adviser to the Vatican’s Secretariat of State. “This encyclical is as much about wealth and poverty as it is about the environment.”

The call to action in “Laudato Si'” is “not just taking out your trash,” Burke told Catholic News Service, “but how much trash … you produce because of rampant consumerism.”

Carolyn Woo, president of Catholic Relief Services and a former business professor, told CNS that the encyclical also includes a call to action for the business sector.

“Pope Francis actually invites business to be a part of the solution,” she said. “But it cannot be business as usual.” Rather, businesses need to shift out of “the same short-term thinking or the same obsession with short-term profits and disregard for people,” she said.

Practically, it means businesses would need to adopt the values of “solidarity and sustainability, oriented toward the common good and the true development of all peoples” and engage in more environmental impact assessments of their activities, she said at the Vatican’s official launch of the encyclical June 18.

Ralph McCloud, director of the Catholic Campaign for Human Development, said cooperatives and other community-based businesses already operate according to the values of sustainability, solidarity and subsidiarity. He said they also are well-positioned to implement green initiatives and “look for green opportunities” that answer the needs of their local communities.

Pope Francis has praised cooperatives as a viable model that fights exclusion and puts people before profit.

“To speak of an economy that we can all share in is not very popular,” said McCloud. But CCHD shares the pope’s concern about how “a broken economy breaks families, communities and the human spirit,” he said. Furthermore, he said, the pope’s comments have been “an inspiration for low-income Americans.”

CCHD, an organization of the U.S. Conference of Catholic Bishops, educates for community-based development and funds community start-ups and cooperatives. Since its founding, CCHD has supported 99 cooperatives, including Golden Steps in Brooklyn, New York, which provides assistance to the elderly, and Opportunity Threads, a textile manufacturing co-op in Morganton, North Carolina.

Co-ops are increasingly understood as “a viable option in a capitalist economy,” he said. In addition to benefitting the families of co-op members, McCloud said co-ops in the U.S. promote the type of personal and community development the pope has called for, including greater participation in education and in the political process.

Kaboski pointed out that recent popes have often used the term “unbridled capitalism” to refer to an economy that is “indifferent to the poor and ideologically rejects any need to circumscribe the economy within a legal, political and cultural framework.”

“A market without rules and morals doesn’t remain free,” he continued. “What (the popes) are really arguing for is an economy that is truly free in the Catholic sense of the word free: an economy that more fully enables people to attain their own perfection.”

In line with the Catholic understanding of freedom, which involves discernment, Kaboski said, the economy requires “reflection and guidance” in order to “best fulfill its proper function, serving all the members of society.”

“The pope is not an economist and his job is not to (propose) concrete economic policies,” he said. “But he is called to be a prophetic voice in the world, praising the work of God and the collaboration of mankind where he sees it” and calling for repentance “where he sees serious social problems
.”