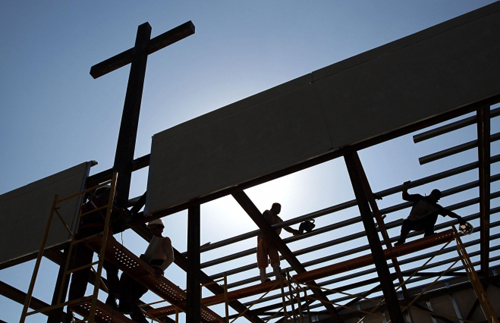 Here’s a look at some of the stories making headlines today:
• The U.S. flag is flying over the American embassy in Havana today, marking the restoration of diplomatic ties with Cuba. At the reopening of the embassy, U.S. Secretary of State John Kerry voiced his thanks to Pope Francis for his role in the restoration.
• Catholic churches in France have been placed under police protection and urged to take extra security measures against possible Islamist attacks before the Aug. 15 feast of the Assumption. “Every religious gathering, whatever its magnitude … is vulnerable today to acts of malevolence, which may extend to terrorism,” the country’s Interior Ministry and bishops’ conference said in a joint message to Catholic dioceses.

• The Vatican’s investigations of U.S. women religious — and resulting tensions — stemmed largely from a “cultural chasm,” the president of the Leadership Conference of Women Religious said at the organization’s assembly Aug. 12. But that chasm is closing, she said, and a new era of communion seems to have begun. There’s even more coverage at Global Sisters Report.

• Connecticut’s State Supreme Court has ruled that the death penalty is unconstitutional. The ruling blocks the execution of the 11 inmates currently on death row (New York Times). Meanwhile, the Arkansas Department of Correction has bought the drugs needed to resume lethal injections, and Gov. Asa Hutchinson said Thursday he expects to be asked soon to schedule the state’s first execution in 10 years (Yahoo! News). Read more about the church’s teachings on the death penalty here.

Now for some Friday fun:
• At NBC New York: New Jersey Brewery to Release Pope Francis-Inspired Beer
• At Philly.com (H/T Rocco Palmo): Pope: Now in cheese form
• Don’t forget to take your #FlatFrancis with you on your weekend adventures. Let’s see some photos!
• And if you don’t have anything planned, check out our Out & About section and the diocese’s events calendar for tons of possibilities.

See you back here Monday for the day’s headlines. In the meantime, visit www.thecatholicsun.com throughout the weekend for the latest local, national, and international Catholic news, and be sure to follow us on Facebook and Twitter.