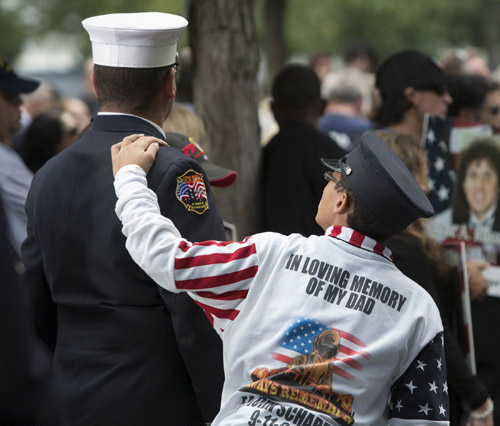 We mark a solemn anniversary today. Click here for reflections, prayers and more.

U.S. church ‘stands ready’ to help Syrian refugees, says USCCB president
Archbishop Joseph E. Kurtz of Louisville, Kentucky, also that Catholics in the U.S. and “all people of good will should express openness and welcome to refugees fleeing Syria and elsewhere in order to survive.”

Colombian rebels want papal blessing for peace talks in Cuba
Members of Colombia’s largest rebel group asked for “the pope’s blessing for them and the negotiating table,” as they enter a third year of peace talks with the Colombian government, said Archbishop Luis Castro Quiroga of Tunja, president of the Colombian bishops’ conference. The armed guerrilla group has also requested a Catholic Church delegate to assist in negotiations.

From the Washington Post: Cuba pardons more than 3,500 prisoners ahead of Pope Francis visit

Also ahead of papal visit: U.S. Catholics’ attitudes sliced and diced in polls
While Catholics are preparing for the upcoming papal trip, polling organizations were preparing in the way they knew best: by coming up with questions to ask them.

Stephen Colbert is also preparing the best way he can: Colbert schedules ‘Catholic night’ as pope comes to town (H/T to the National Catholic Reporter)

Just announced by the USCCB: Visit of Pope Francis to United States will be available via livestream, social media channels and hashtags

But even better than watching on your computer is being there in person. We’re giving away tickets to celebrate Mass with the Holy Father at Madison Square Garden! Click here to find out how you could win.

See you back here Monday for the day’s headlines. In the meantime, visit www.thecatholicsun.com for the latest local, national, and international Catholic news, and be sure to follow us on Facebook and Twitter.