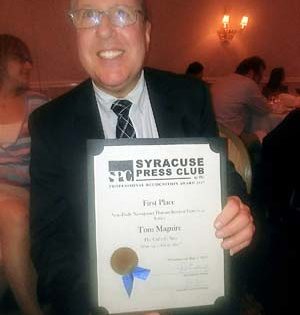 The awards were presented online by the Catholic Media Association, which says it is ”by all accounts the most active and vibrant group of Catholic communicators in the world. It has over 200 publication members and 600 individual members in the association. Member print publications reach nearly 10 million households plus countless others through our members’ websites and social media outlets.”

In the story, Coach Wleklinski says: “Bobby and I are friends, and sometimes people at large … don’t realize that it’s still a game. Bob and I are friends, we’ve been friends for a long time. The players are friends. … Rivalries are there because of respect. You shake hands, you hug.”

Coach McKenney comments in the story: “When we play anybody, especially a good team like CBA or anybody that Buddy coaches, until that bell goes off to end the game I’m still nervous that they’re comin’ back.”

Taking second place in the writing contest was the Catholic Standard, of Washington D.C., for “At Funeral Mass, DeMatha Coach Morgan Wootten’s legacy as a coach, teacher and man of faith remembered.” Third place went to the Florida Catholic (Miami) for “Don Shula, 90: Winner in football and faith.”