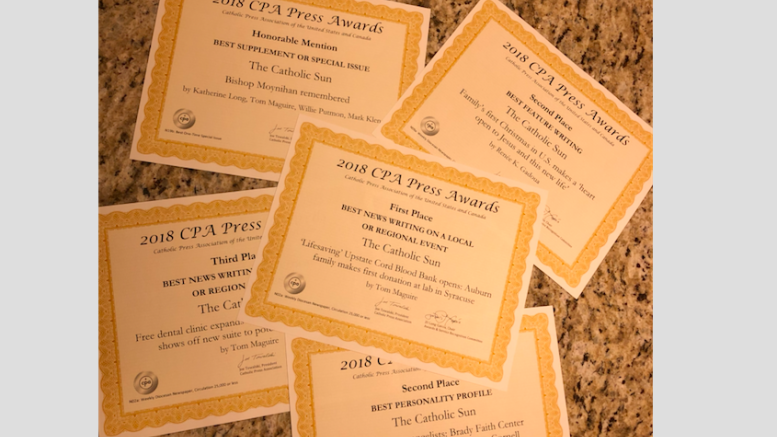 The Catholic Sun and the Diocese of Syracuse earned six awards at the Catholic Press Association of the U.S. and Canada’s Catholic Media Conference June 15.

The Sun team earned five awards for its news and feature writing in 2017. The diocese took home an award, for the second year in a row, for its social media.

“It is a thrill and an honor for the Sun’s writers to be recognized for their outstanding work,” said Sun Editor Katherine Long.
The winning stories are as follows:

• First place: ‘Lifesaving’ Upstate Cord Blood Bank opens: Auburn family makes first donation at lab in Syracuse by Tom Maguire
Judges said: “Timely coverage of a compelling topic. Is a classic case of a story that informs but also might spur others to act.”

• Third place: Free dental clinic expands in Syracuse; Dental service shows off new suite to potential volunteers by Tom Maguire
Judges said: Loved the topic. Well-written and this story gives a nudge to others who might be considering donating their money or services to this important part of heath care.

Best feature writing (weekly diocesan newspaper, circulation 25,000 or less)
• Second place: Family’s first Christmas in U.S. makes a ‘heart open to Jesus and this new life’ by Renée K. Gadoua
Judges said: This article stood out for its ability to humanize an issue through the story telling of one family while weaving in details about the overarching social issue.

Best personality profile (weekly diocesan newspaper, circulation 25,000 or less)
• Second place: A tale of two evangelists: Brady Faith Center exec and buddy recall epiphany at Cornell by Tom Maguire
Judges said: The vibrant, bold personality of the subject leaps off the page thanks to the writer’s use of details, descriptions and quotes.

Nicole Ossevoort, Communications and Social Media Specialist for the Diocese of Syracuse, took home the Father John Catoir Social Media Evangelization Award for the second year in a row, for the Year of the Family campaign. The award is “given to the person who leveraged the power of social media to achieve the objectives of making Jesus known and loved.”

View the complete list of winners across all categories of media on the Catholic Press Association website.