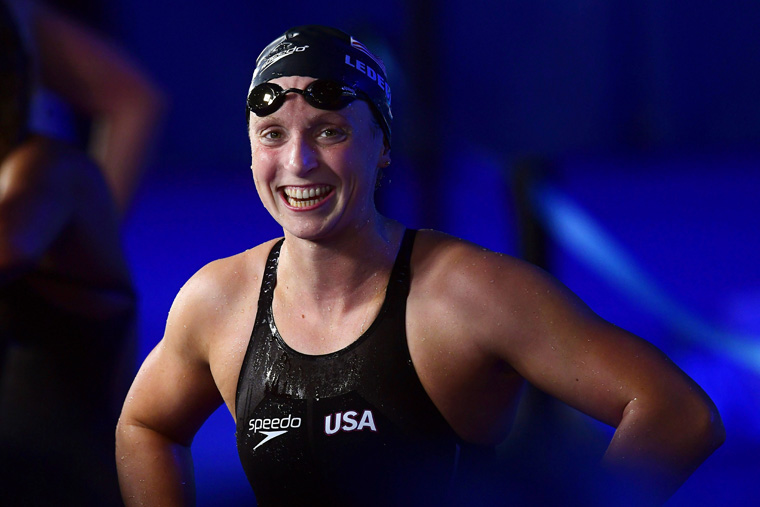 WASHINGTON (CNS) — The Associated Press named Katie Ledecky the Female Athlete of the Year Dec. 26, after balloting by U.S. editors and news directors.

Ledecky, a graduate of Little Flower School and Stone Ridge School of the Sacred Heart in Bethesda, Maryland, received 351 points in the vote, placing her ahead of tennis star Serena Williams, who received 343 points. She was the eighth female swimmer to earn the honor and the first since Amy Van Dyken in 1996.

The vote reflected Ledecky’s dominance in the July 2017 world championships in Budapest, Hungary, where she earned five gold medals and one silver medal.

Ledecky is known for setting lofty goals for herself and achieving them, working hard and taking part in grueling workout schedules.

Another part of her routine, she told the Catholic Standard archdiocesan newspaper prior to the 2016 Olympics, is praying before races.

“I do say a prayer — or two — before any race,” Ledecky said. “The Hail Mary is a beautiful prayer and I find that it calms me.”

Now a sophomore at Stanford University, Ledecky also told the Catholic Standard that attending Catholic schools in the Archdiocese of Washington helped make her the person she is today.

“I received an excellent, faith-filled education at both schools. Having the opportunity to attend academically rigorous schools has facilitated my interest in the world and in serving others, and has enriched my life so that it is not solely focused on my swimming and athletics,” she said.

She said going to these schools was also important to her swimming because they challenged her and broadened her perspective and “allowed me to use my mind in ways that take me beyond just thinking about swim practices, swim meets and sports.”

Now, Ledecky is preparing for this coming March, when she will compete in the NCAA championships with her Stanford teammates. During the last week of December, she is traveling with the team to Colorado Springs, Colorado, for high-altitude training.

After competing in the 2016 Olympics and before leaving for college, Ledecky visited her alma maters to answer students’ questions and show them the medals that she had earned. With those school visits, she said she hoped to make an impact.
During the Olympics, she said she was “just praying to do my very best to represent my country.”

“I always just use my faith to think, ‘I have been given this gift, and I want to use it to the best of my ability,’” she said, adding that she doesn’t want it to end there. She hopes her accomplishments will “inspire somebody or make an impact of some sort beyond just getting a good time or getting a gold medal.”