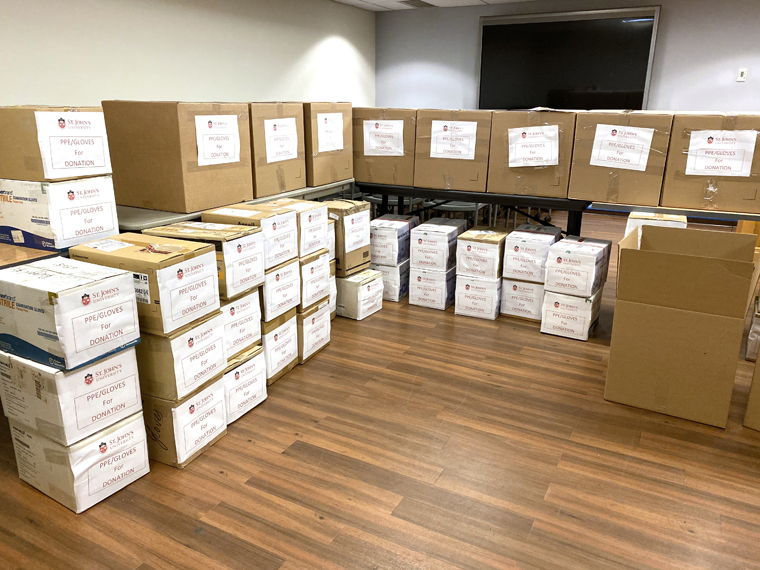 BROOKLYN, N.Y. (CNS) — It was a scene of hope and humanity as boxes and boxes of medical equipment at St. John’s University were packed up and driven over to New York-Presbyterian Queens hospital.

The New York university has been on lockdown for two weeks — classrooms are empty and students are learning from home. Still, a small group of staff — including Brian Browne, director of the school’s office of university relations, worked March 24 to donate supplies as part of a fight against the coronavirus.

“They were very happy, as you know this is a growing issue across the country,” he said. “Here’s the need for these medical supplies and PPEs (personal protective equipment) and we have the capability to give back. They’re happy to take it.”

Currently there are equipment shortages across New York as hospitals continue to fight the pandemic and New York Mayor Bill de Blasio said public hospitals only have about a week’s worth of equipment and supplies left.

“We have excess classroom medical supplies, our students have now gone home, they’re learning remotely and virtually, so we want to give these extra supplies to our neighborhoods down the street,” Browne told Current News, part of NET TV, the cable network of the Dioceses of Brooklyn.

The gesture is one born from the Catholic Vincentian mission, which has been embedded into the university’s culture from the beginning.

“St John’s was founded by the Congregation of the Mission, who are followers of St. Vincent de Paul, a great community organizer,” said Browne. “And he asked the question to his followers — a question that was asked to him — and that was: ‘What must be done?'”

This might not be the only way the university aids in fighting the coronavirus crisis. They were also listed by New York Gov. Andrew Cuomo as a possible location for one of the city’s emergency field hospitals, similar to what’s being set up in the city’s Javits Center, a convention center.
City officials toured the campus for that purpose March 20, but no decision has been announced.

David Want, a clinical coordinator at the nursing school, delivered 20 boxes of sterile surgical gloves, 61 boxes of nonsterile exam gloves, 13 containers of disinfecting wipes and 8 packages of isolation exam gowns to the hospital.

Personal protective equipment is critical “as health care providers care for those who have or are at risk of having COVID-19,” said Patricia McMullen, dean of Catholic University’s nursing school. She said that since the nursing students are now studying virtually, they will not be using these materials.

Hospital officials said they were happy with the donation especially with current shortages of these materials.

“As we share in the Catholic tradition, we are grateful for your stewardship of these important resources and your reverence for those who serve and those whom we serve,” said Dr. Norvell Coots, president and CEO of Holy Cross Health.

Just down the street from Catholic University, Trinity Washington University was donating space for drive-through coronavirus testing for children with pediatrician referrals for nearby Children’s National Hospital.

But donations of supplies and space have not just been done by Catholic universities. On March 24, The Catholic High School of Baltimore also donated personal protective equipment including masks, gloves, goggles and protective gowns to Mercy Medical Center, sponsored by the Sisters of Mercy, in downtown Baltimore.

The hospital, which treats many of the homeless in Baltimore, has a collaborative relationship with the nurses’ club at the high school, sponsored by the Sisters of St. Francis of Philadelphia. Several of the students’ parents also work at the hospital.