Catholics mobilize at border and around U.S. to help separated families 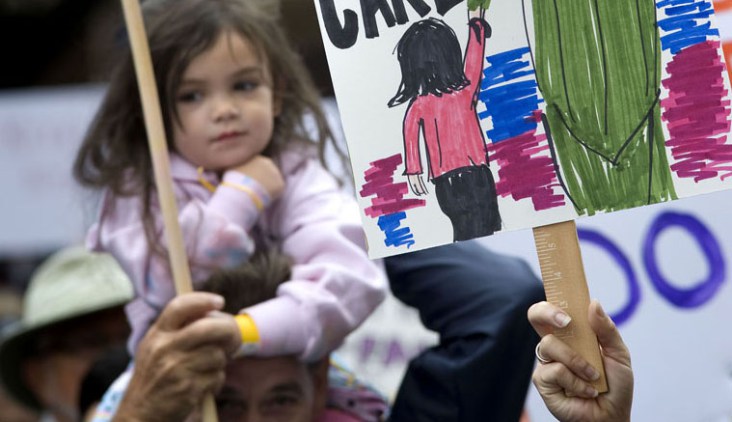 WASHINGTON (CNS) — Some have taken their indignation all the way to the border between the U.S. and Mexico, while others have taken action closer to home, protesting while accompanied by their children and fellow parishioners in cities and towns across the U.S.

Others are volunteering their services to counsel or visit immigrant children separated from a parent or are publicly advocating against the practice.

From coast to coast, Catholics, including cardinals, bishops, women and men religious, priests and laity, and many sisters from an array of religious orders, and the organizations they staff or support, have been among some of the most public and vociferous voices around the country in defense of immigrants. That defense has gone into overdrive in efforts to reunite migrant families and to call for their humane treatment.

“Some of these episodes are right down inhumane, unbiblical and un-American,” said Cardinal Timothy M. Dolan before a crowd of reporters in New York City during a June 28 news conference aired on Facebook by CBS New York. “I’d like to think that America has just experienced a wake-up call. That we’re getting a little bit away from our roots, of a posture of welcome and hospitality and embrace to the immigrant.”

Outside a federal courthouse in El Paso, Texas, where hundreds of protesters had gathered to speak against family separation and detention in late June, Sister Simone Campbell, a Sister of Social Service who is executive director of the Catholic social justice lobby Network, addressed the crowd using the words from the Book of Micah: “What does God ask of us? Act justly, love tenderly and walk humbly.”

“Our nation is failing this mandate,” she said. “We are failing to act justly. We as a nation are not loving. Our leadership is not walking humbly. We must repent and change our course of action.”

On June 26, she tweeted that she was heading toward a detention camp for children to deliver toys and books but had “no luck” in being allowed to do so.

Father Tom Smith, a Conventual Franciscan who runs a retreat center that has housed 500 migrants since November 2016 in New Mexico, had the same experience and was denied entry to a child detention center in Texas on Father’s Day.

“This is a moral and inhumane situation,” said Father Smith in a statement posted on a Franciscan blog June 25.  “Scripture calls us to welcome the foreigner, to treat them as we would treat our own. Jesus in Matthew 25 states clearly the way we treat others is the way we will be judged. Is the present immigration approach how we would want to be treated?

“Zero tolerance is vindictive and immoral. Immigration officials may now say we are not separating families, but how long will it take to unite those already separated?”

Though the Trump administration said it would temporarily stop separating children from their parents at the border, Catholics advocating for the migrants worry about the administration’s imminent plans to detain the children and their family members at camps on military bases in Texas.

On June 28, the U.S. Department of Defense released a statement saying it had received a request “to house and care for an alien family population of up to 12,000 people” for the Department of Homeland Security, which deals with immigration detention, since it oversees U.S. Immigration and Customs Enforcement. The request, it said, was for “soft-sided camp facilities capable of sheltering up to 4,000 people at three separate locations” in Texas, Arizona, New Mexico or California.

Some of the children who already have been separated have ended up in places such as New York, with foster parents or in shelters, where organizations such as Catholic Charities are providing legal support to try to reunite them with family, or to provide emotional comfort while awaiting to be reconnected with family.

Msgr. Kevin Sullivan, executive director for Catholic Charities New York, who was present with Cardinal Dolan at the news conference, said the organization was trying to help families deal with the tragedy of the separation and trying to reassure the children experiencing difficulties as a result of the events, while also making sure they receive medical attention they might need.

“They had a plan when they came to the United States: to be with their parents. They’ve been taken away from their parents,” he said.

Father Smith said even though the administration plans to detain the families as a unit, that will not solve the problems of treating them inhumanely.

“We need to respect their dignity. Joseph and Mary and Jesus had to flee their home country because King Herod threatened to kill the child Jesus,” he said. “Would we send them back if they came to our border and say, ‘Sorry, we don’t want you!'”

In Pennsylvania, Chris Zurawski, a secular Franciscan, said she was heartened to hear her pastor’s Sunday homily address the immigration issue as a pro-life issue. The priest started the Sunday homily June 24 with St. John the Baptist and spoke of standing up for what people believed in.

“He asked questions and he said he wanted to see hands, how many are Christians? How many are Catholics? How many pro-life people contacted (their local) representatives?” about immigration and other issues that the Catholic Church backs, she recalled.

Though many Catholics, like Zurawski, are voicing support of migrants, some are going against the church’s official stance on welcoming them. Some in her parish, she said, didn’t like their pastor’s approach in tying immigration to the pro-life issue and walked out during the homily asking them to get involved.

“There are people, they don’t want to hear that stuff,” she said, in a June 29 interview with Catholic News Services. “I’m coming from a different angle because I’m a secular Franciscan.”

And that means accepting everyone into the church, she said.