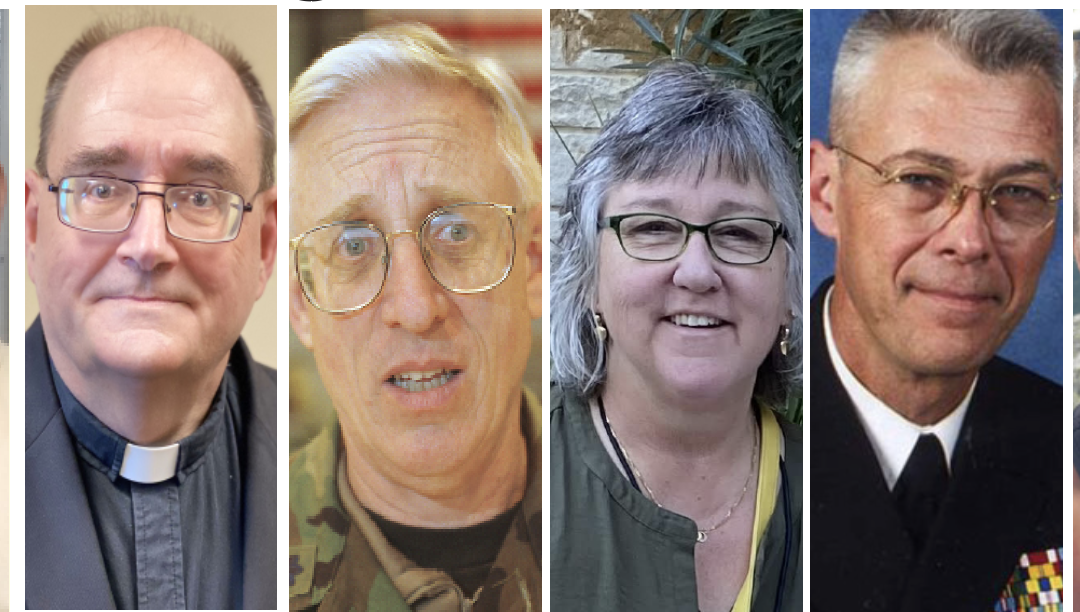 Anyone who has a family member, friend, neighbor, colleague or leader who has served in the Armed Forces, knows the value they bring to those around them. They bring integrity, commitment and a unique perspective to their work and service to others.

This Veterans Day, we honor those who have served our country, especially members of the Diocese of Syracuse, whose compassion, strength and resiliency enriches our community. We reached out to our parishes, departments and schools and asked veterans to tell us how serving in the military and being Catholic shaped their lives.

Father O’Brien served as a chaplain in the Navy Reserves as a Captain (06) from 1991 to 2020. He acted as counselor, spiritual director and moral compass and guided those who had faith — no matter what that faith was. “Both the Church and the military are very similar,” said Father O’Brien. “They both involve duty, commitment, tradition, ceremony, and service. The Church taught me obedience. The Navy taught me flexibility.”

“My primary role in all of my deployments was to travel to make sure there was Catholic coverage. I would jump from ship to ship. While in Africa, I would travel from country to country. I was part of a convoy in Afghanistan.”

Father O’Brien said that two of his deployments were not positive experiences. It is his trust in God that helped him keep things in perspective. “When you’re flying in a helicopter to say Mass for three people in a war zone, anything can happen, including being shot at,” he said. “My faith in God and His overall plan for me got me through some difficult experiences. We might not always like where we are and that’s a conflict. But I was where God wanted me to be.”

In 1970, Father Mathis entered his third year of theology study in the seminary. He joined the Army and he went through basic training and chaplain school at Fort Dix, N.J. “I really thought I owed my country something because of all the freedoms that I share.” Father was in the reserves for three years while finishing seminary and through ordination. He hoped to enter active service as a chaplain, but the ranks were full.

Instead, he served the diocese as a priest and extended his service in the reserves with the 259th Signal Group based in Liverpool. The Signal Group was ultimately moved away from the area and the 174th Fighter Wing at Hancock Air Base needed a chaplain. Father Mathis interviewed, got the job and stayed there for 23 years. He was deployed to the Middle East with the 174th during both operations Desert Shield and Desert Storm.

“We ended up in an undisclosed-location base in Saudi Arabia. I was serving 6,000 troops. There were five chaplains, but I was the only Catholic priest.” Father Mathis preferred not to talk about “the bad stuff” but “there was one occasion that really stands out,” he said. He said Mass for about 2,000 troops. Anyone who spoke English attended, including British, Canadian and Indian troops as well as Americans. “It was such an eye-opener to see all of those people at Mass.”

“If I was going to single out one thing a military chaplain can do, it would be the ministry of presence,” he said. “I walked the flight line every day. It was about a mile and a half long, and I tried to say ‘hello’ to every person.”

As the only Catholic priest at the base, Father Mathis often worked 12-hour shifts. “I’d be up at 4 in the morning, on the flight line by 6 a.m., and work until 3 or 4 in the afternoon. I’d go home, take a nap, get some chow, and then say Rosary and Mass. I’d then work until about 10 or 11 at night.” Father maintained that daily schedule for six months during each deployment.

Father believes that we each have a responsibility to serve. “It’s not a free ride. If we all gave something to our country, it would be a lot better.”

Father Dunn served in the Air Force from 1985 to 2010. During his 25 years of service, he was stationed around the country and around the globe, including Greece, Japan, England, and Korea, Bosnia and Kuwait.

One memory that stands out was when he got to ride in an F-16. “It was fantastic,” he said.

Rosemary served as a Sergeant/E-5 in the Army from 2000 to 2005. She was a light-wheeled vehicle mechanic/recovery operator. She named the five-ton wrecker she drove her “baby.” When she was discharged, her colleagues in the motor pool gifted her with the steering wheel — which is proudly displayed in her office at Catholic Charities.

Upon completion of her training, Poindexter was stationed in Darmstadt, Germany, and was part of the Iraq invasion in 2003. Poindexter said her faith kept her going. “There were times all I could do was pray, and I’m sure I had guardian angels shielding me from seeing or experiencing the true horrors of war. Unlike other veterans who saw such horror right in front of them, I saw them from a distance.”

Poindexter has learned that everything happens for a reason even though we may not know the reason for years to come. “I believe that life is hard but we shouldn’t pray for life to be easy, we should pray for God to give us the strength to bear it. It is through that strength that we find power.”

Samantha served in the Air Force from 1989 to1992 with the rank of senior airman. She worked in electrical and environmental systems on KC-135 aircraft to ensure they were in reliable operating condition.

She was stationed at Griffiss Air Force Base in Rome, Oneida County, and traveled to the United Arab Emirates (UAE) and Saudi Arabia in support of Desert Shield. Augur said that although Christianity was not allowed in that country, they were fortunate to have a tent set up for Mass. “It was comforting having somewhere to go to worship,” she said.

“It was a privilege to help our country. It’s not an easy task to leave the people you love to go and serve. But having faith in God helped me through the hard times of being away from my family and friends and during the times I was in harm’s way.”

Benjamin served in the Army as an E-4 from 1984 to 1988. He was a heavy-equipment mechanic fixing everything from tanks to boats. The Army taught him how to follow directions and how to work with and depend on other people.

Hill said the best experience he had in Germany was when he and his fellow soldiers built a soccer field for a small village. “We stayed in a guest house and were given meals every day. It made me feel human.”

While in Germany, Hill and his friend John were baptized. “It gave us comfort knowing there is something greater in this world. We knew that if we lost our lives, we would go to heaven.” Hill said it’s important to forgive, stay strong and thank God for being the point man.