He flew a plane, built his own houses, and talked to the deer

JAMESVILLE — The 100-year-old man says the baby, his great-grandson, “looks at me and smiles and laughs.” If the kid is anything like his great-grandfather, he’ll remember the moment.

“I can remember the first word I uttered,” said Henry “Hank” Maynard Blizzard, who became a centenarian on Jan. 11. “I was the eighth of eight children: seven boys and one girl. …

“I was a breast-fed baby. And I guess I was a hungry one. And my mother would not have all the milk I could drink. So she would say, ‘All gone.’ And I remember repeating: ‘All gone.’ So I remember the first word … or at least, that’s what I remember.”

Like the real whipped cream on his birthday cake, Hank, who has a John Philip Sousa connection via his father, is the genuine product. His first comment to a reporter was about digital recorders; he wants to tell more stories than a birthday party can accommodate. When he starts talking into it in his gentle voice, the recorder will be the one that needs more memory, not him.

About 35 family members, including three-month-old laughing baby Carter James McCarthy, and friends filled the upstairs room at The Nottingham, a senior center where Hank lives with his wife of 77 years, Jane, 98.

Light the fuse and blast away

Former longtime parishioners of St. Anne’s Church in Wells in the Adirondacks, they donated stained-glass windows to the church. Hank and Jane now attend Msgr. John J. Heagerty’s Masses on Saturdays at The Nottingham. Hank’s birthday party was on a Saturday, but there was time for a few tales before Mass. His audience feasted on his stories like the deer that gobbled his handouts in the mountains. 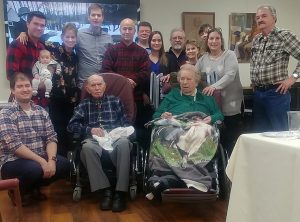 Hank and Jane Blizzard rode around in this Corvette for 35 years or so, says their grandson Kyle Halleran. Kyle says the pace car was one of 500 that were made. (Photo Courtesy Blizzard Family)

Hank’s family ran out of names, he said, so they named him after the doctor who delivered him. He was his mom’s only baby that was born in a hospital. Hank lived in Westminster, Md., outside Baltimore, moved to Long Island, worked, sold his business, and moved to the Adirondacks, where he was known for being kind to various wild animals and hosting many gatherings. He was more likely to be found building an Adirondacks-worthy chair than snoozing in one.

“I’ve done everything,” said Hank. “I went out and picked beans when I was five years old. I picked beans in the field with the big boys for the canning factory.” He has the first sawhorse dollar he ever earned: oversized, before dollar bills were printed smaller. “It’s never been folded,” Hank said. “So I have that. My mother kept it; I didn’t know it until I was 16, and then she gave it to me.”

Teaming up with Sousa

Hank’s father played every musical instrument except the piano, mainly horns. “He could transpose at sight from one instrument to another,” Hank said, “so he could play from one sheet of music.”

He said his father played in Sousa’s band and helped Sousa with the arrangement for “The Stars and Stripes Forever,” the national march. “I’ve got the pictures; I even have some of the sheet music,” said Hank, who used to enjoy tap dancing.

At 10 a.m. on his mother’s birthday, the local Baltimore radio station played “The Stars and Stripes Forever” until she died at age 104.

At age 12, Hank was flying an airplane that his older brothers had purchased. He went on to take courses in architectural, aeronautical, and mechanical engineering, and he wrote manuals for aircraft manufactured by Grumman.

At his high school commencement, the graduates were told to get a job with a large or small company, or to start their own business. He founded a business and developed tiles, colored grouts, and mortars. His company supplied some of the grouts for the World Trade Center. Jane always took care of the books for Hank. A very gifted writer, she wrote “poems for everybody and little snippets for Reader’s Digest and Newsday,” said Hank and Jane’s daughter, Susan Blizzard-Halleran, of Jamesville.

From the ground up, Hank built several houses for the family. He had his own sawmill, front-end loader, and backhoe. He retired in his 50s and moved to Wells. In his woodshop, he made grandfather clocks, mantel clocks, rocking horses, desks, tables, and chairs.

“He did some really good stuff,” said his son Bryan Blizzard, of Long Island. One time Bryan tried to build a go-cart and burned out every drill bit that Hank had. So Hank brought him to a welder, and the go-cart was saved.

Hank’s longtime friend Father Charles S. Vavonese spoke of Hank’s “real love for living rurally; he was kind of like the deer whisperer in Wells. … He had a way with deer, and he was known for that.”

He added: “He is the patriarch of the family; he is a great man of faith. … He just is one of those people who is successful in so many things … and really a very delightful man. … And he’s got a wonderful attitude toward life. He’s so upbeat. He’s so proud of his family and the grandchildren.”

Grandson Kyle Halleran, of Stamford, Conn., recalls grilled-cheese sandwiches and tomato soup at the Wells home, which had four big bedrooms. The acreage, which included a pond, was plentiful. Of old home days in August, Kyle said:

“It was the Super Bowl plus the World Series plus the Final Four plus Christmas just wrapped into one sweet weekend. [We’d] always go up there, we’d see my cousins. … It was always a very fun time as a child.” There was always a clown that shot the kids with water, and the kids in turn threw hard candy at the people in the floats.

Who threw that crab apple?

One time Kyle, who is six feet seven inches tall, and his friend accidently displaced a big wooden plank that created the dam for the Blizzards’ pond. The pond water “just went

Kyle’s sister Shannon Halleran, of Syracuse, said Hank and Jane “opened the house all the time to anyone who was willing to go visit.” She remembers ski trips (Wells is near Gore Mountain), and someone “chucking crab apples.”

Another speaker produced a moment of emotion when she told Hank: “YOU were my second dad.” Kathleen Whitney, of Oswego, has been best friends with Susan for 64 years. “My father had two jobs,” Kathleen said, “but there wasn’t enough time for my dad to spend a lot of time with me.”

She added: “I couldn’t have asked for a better mentor. … On the other hand, he was no pussycat.” When her brother, John, decided to play his music out of his bedroom window, she recalled, Hank said, “‘You turn that music off or I’m getting my shotgun out!’”

Glamour in the Corvette

In an email, their great-nephew (Arthur) Keith Blizzard, of Silver Spring, Md., said Hank and Jane added an “unmatched air of energy and pizzazz to any gathering.” He recalled seeing them arrive in a “head-turning Corvette”: “two glamorous laughing adults, unfolding themselves from the deep recesses of a sports car with broad grins, warm smiles, a hearty hello, a slap of the back, and a big hug.”

A decade is a pretty good length of time. One to 10 you’re a kid. Ten to 20 you’re sort of an adolescent. Twenty to 30 you’re sort of a young adult and you can no longer be excused for stupid things. At 30 to 40 you should be on your way to a good career, or 40 to 50 you should be at the upper end of your career. Fifty to 60 you should be really at the top of your career, and 60 to 70 you should be winding down …  and then the rest is — if you make it. A hundred years is nothing to scoff at. That’s a pretty good stint. You’ve got to remember, though, he comes from good genes — his mother was 104. So he’s got a few years to go. And I think … all of us here that are adults … realize that it goes by in the blink of an eye.

The party was almost over. Jane, who had planned it ever since Hank’s 99th birthday, figured it was the best one they ever had. Jane’s gift to her husband was a flag that flew over the U.S. Capitol on Hank’s birthday.

Handed the microphone, Hank asked the party-goers: “How many people know what a chinquapin [CHING-kuh-pin] is?”

It’s a nut that grows in the hedgerows of farms. Remove the fuzzy coating and skin it, Hank said, “and boy, that was a prize for us kids to be able to get that little white goody out of that chinquapin.”

For less than a sawhorse dollar, he’ll toss a few verbal goodies your way too.