Ceremony marks six baptisms, one First Holy Communion at Our Lady of Lourdes Church in Utica 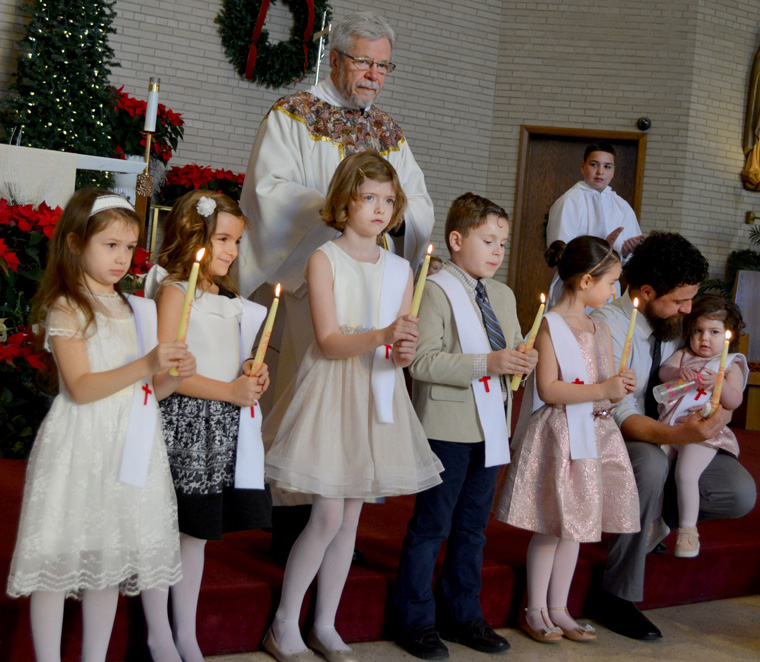 Bestowed with a special light, the newly baptized children immediately moved to share it.

Six children were baptized in an awe-inspiring First Friday Mass on Jan. 4 at Our Lady of Lourdes Church in Utica. Then the six stood with Father Joseph Salerno and held their glowing candles way out to the congregation, which included everyone from Notre Dame Elementary School. Joining in the day’s glory was one pupil who received her First Holy Communion.

“The ceremony very much centered around the children so they could understand,” said Sondra Nassar, the school’s librarian and sacramental-program leader. “It was very exciting.”

One by one, the children stood on a step stool and eagerly bent over the font so that Father Salerno could pour the baptismal water on their head. “They were OK with it,” Nassar said. Then one of the altar servers wiped off their hair, and another altar server draped white stoles on the children.

“At any age you can get welcomed into God’s community,” Nassar said. “It’s never too late.”

An honor for Autumn

Autumn is excited, said her mother, Michelle Miller, because now she can accept Holy Communion during the school’s First Friday Masses.

Autumn’s sister, Maci, 6, an NDE first-grader, was baptized with the five other children. Maci “smiled pretty much the whole time,” her mom said.

This is the sisters’ second year at NDE. “I work a second job just so they can keep going there,” Miller said. She added that it’s the least she can do to set them up for success later in life.

“They love it there,” Miller said.

Nassar said Autumn’s instruction had focused on topics including the different parts of the Mass and the meaning of the liturgy and where it comes from in terms of Scripture.

Baptism instruction, she said, included the idea of becoming part of a community, the meaning of the water, Jesus’ baptism, signs, symbols, and Bible stories.

Olivia Rice, 6, a first-grader at NDE, was baptized along with her sister, Aria Rice, 21 months. Olivia “knew all her prayers,” Nassar said. “She was very excited to receive her baptism … with her sister. She was a very fun child to work with. I enjoyed her love of learning about Jesus.”

‘Right thing to do’

Oliver Lyubezhanin, 7, a second-grader at NDE, was also baptized. Part of the decision, said his mother, Olga Lyubezhanin, was the sense of welcome from Our Lady of Lourdes Church and everybody at NDE — “really good influence on Oliver. It felt like the right thing to do.”

NDE second-grade teacher Mary Carville was chosen as Oliver’s godmother. “It was a great honor that they thought of me,” Carville said.

Father Salerno told the children to “do kind things from your heart,” Olga said.

“Really nice, heartfelt ceremony,” she added, and Oliver thought it was very important that it happened in front of his classmates. She noted that Oliver also had his First Reconciliation — “helps keep him grounded and he has some guidance in his life. So I think it’s very important for him.”

Laura Bushley, 6, a first-grader at NDE, was also baptized in what her mom, Michele Leddick, called a beautiful ceremony. “Father Joe took time with each one of them to light the candle,” she said.

“She’ll remember this,” Leddick said. “She’s still talking about it. She said she was a baptism princess.”

The honorees, she said, “were a big deal all day long in school. … The baptism prince and princesses.” In a get-together in school, the teacher gave the children cross pendants, Leddick said.

The school feels like a family to her: “Everybody knows you. Good feeling as soon as you walk into school every single day. Worth every penny. … and  the church is wonderful. Father Joe is absolutely wonderful.”

Emma King, 7, a second-grader at NDE, was in the baptism group; she will receive her First Holy Communion this year as well. She is connecting prayers she learned in school to the Mass, said her grandmother, Ruth Ann Rubman.

“She was real happy and she was excited,” said Rubman, mother of Emma’s mom, Audra Ross.

“My daughter asked her if she was nervous,” Rubman said. “She said, ‘No, I was just watching everybody watching me.’”

Emma’s godmother is NDE first-grade teacher Mary Heintz. “It meant a lot to me to be chosen,” Heintz said.

Rubman noted the honorees were “all holding their own candle really far out. Really it was kind of impressive to see them holding the candles. … The whole thing was so good.”

Although the entire school was there, “it stayed fairly quiet,” she said. The honorees were very receptive, “almost like they were in awe. … They all were the same. They just were like, Wow.”

Nassar is proud that two of the children picked a teacher as their godmother: “To me it shows that as Catholic school teachers the staff at NDE does put their faith into action. We are that example of Christ that these children need.”