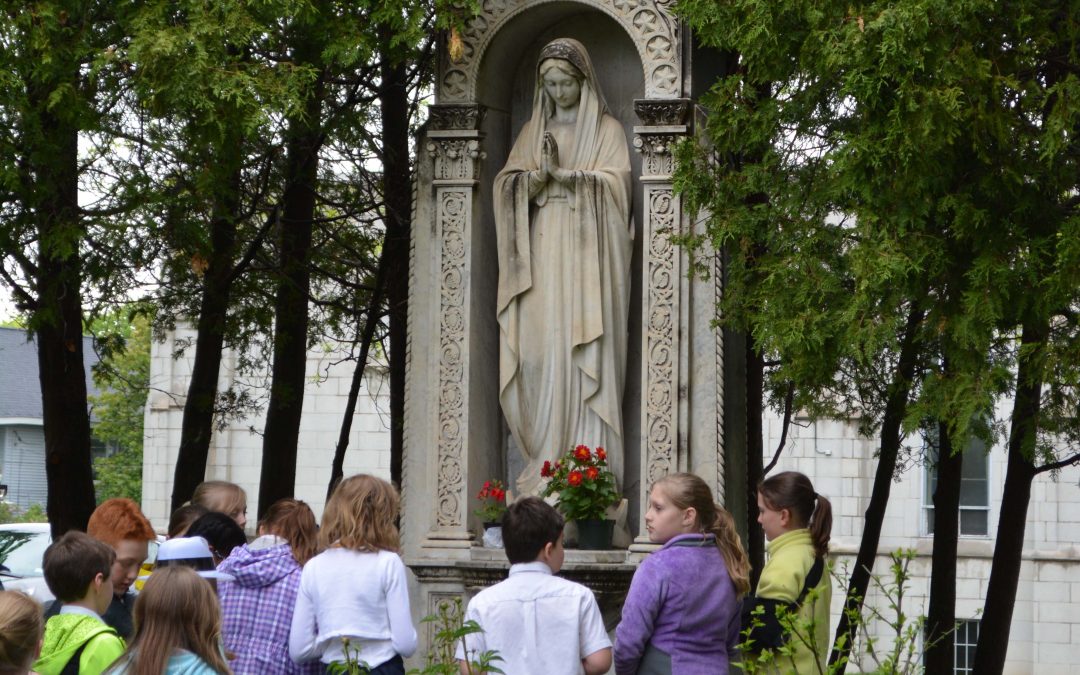 UTICA — Plastic rosary beads were clutched in little hands as nearly 60 children from Notre Dame Elementary made their way to five different statues of the Blessed Mother on the grounds of their school and neighboring Our Lady of Lourdes Church. The children, members of the school’s Children of Mary Club, were holding a rosary rally last Monday.

Members of the club range from one little kindergarten student to sixth grade students who meet monthly throughout the school year, said second grade teacher Maryann Buck, who has been in Catholic education for 40 years. Buck and school librarian Sondra Nassar have co-coordinated the club for the past two years.

The first statue visited was on a stairway landing in the school. The group then processed to the second statue of Mary which is visible from Genesee Street. Its stonework surround has elements mirroring the school’s architecture. Principal Mary Rossi referred to the third statue as the Rome Catholic Mary. When Rome Catholic School moved to the former St. Peter’s Elementary in Rome, she said, the heavy statue was moved with the help of cemetery equipment, and cleaned before resting along the Barton Avenue side of Notre Dame Elementary. The children crowned this statue with a wreath of flowers before saying their rosary decade.

The children made their way to the chapel of the Seton Center, where they were joined by Father Joseph Salerno for their fourth decade. Father Salerno then walked with them across the parking lot to the church where the children gathered in front of statues of Our Lady of Lourdes and the Blessed Mother.

Seminarian Nate Brooks, who travels to Baltimore, Md., in July to continue his theological studies, joined the children for the beginning of the rally and again at the church. He said, “I’ve seen this done throughout the diocese with different groups, but never with young children like this.”

Some of the children were particularly excited because they were allowed to bring a friend making the rally go a bit “viral.” Yet, the children were attentive and focused. Buck said, “Little children have a wonderful love for God and their innocence is inspiring.” At one of the statues, she noted that two third-grade students knelt in front of it. “They weren’t told to do that. They just did it when everyone else was standing. It brought tears to your eyes.”

“There are always two things I have in mind when working with this club. I want them to see Mary as their friend, someone they can always turn to and someone walking with them on the path God has given them. And, I want them to feel good about themselves.”

She said the first thing she asks the children to do when they meet is to give themselves a hug and say “I love me.” When she asks them why, they respond, “Because I am a child of God.” None of the club’s meetings is complete without saying a decade of the rosary, noted Buck.

Dyann Nashton is a writer from Oneida.