Choosing happiness in the face of unspeakable tragedy 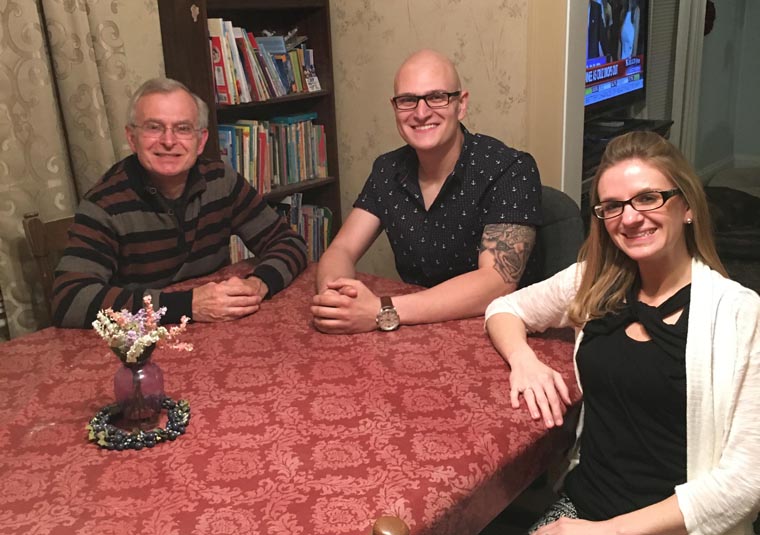 Editor’s note: This story originally appeared on BuffaloNews.com, the website of the Buffalo News, on May 6, 2016.

When Christina Feldman and her brother Michael were small children, they grew accustomed to the unusual way their father, Bernie Feldman, said farewell. Always, while dropping them at school or waving as they ran off to play, he would call out to them:

“Goodbye. Remember. Choose to be happy!”

Christina and Michael, now both in their 20s, laughed last week at the memory, from the dining room table of their Syracuse home. Choose to be happy? When they were little, it seemed like another goofy and endearing trait of the scholarly dad they called “The Bernopedia.”

As the years went by, brother and sister came to a harder understanding: Their father was guiding them toward the same choice he had to make himself.

Within the Feldman household, they see no other shelter. In a family that by all rights should be six, a family that has faced what seems like almost a biblical trial, half those seats are empty now at the table.

“You hear this story and you ask: How much more can one family take?” said Mary Lanno, a longtime friend. 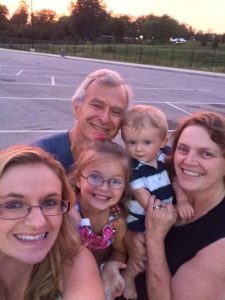 Bernie, 65, is a native of Akron. His father, Bernard, worked at the former Westinghouse plant in Cheektowaga and ran a small farm with Bernie’s mother, Henrietta. As a child, Bernie found a passion in caring for animals. He attended SUNY Geneseo State College. He decided to pursue a career in zoology.

In 1984, Bernie and his wife Nancy were living in Kansas — where Bernie was a birdkeeper at the Topeka Zoo — when they learned their 3-year-old daughter Laura had leukemia.

It was, as Bernie put it, the first “lightning bolt.” For four years, their child endured painful treatments meant to roll back the disease. Bernie and Nancy depended on each other for strength. Their daughter went through a bone marrow transplant. It didn’t take.

Laura died in 1988. By that time, the Feldmans had moved to Syracuse, where Bernie accepted a job at the Onondaga County Zoo at Burnet Park. In the loss of a child, Bernie forged a creed: Choose to be happy. He and Nancy were raising two small daughters, Sarah and Christina. Bernie would sometimes bring home young animals — a reindeer, he recalls, or a tiny bighorn sheep — that needed overnight care from the zoo staff.

Christina, now a 29-year-old schoolteacher, remembers those days with awe. It was a magical time. The duration was too short.

In 1991, Christina’s parents noticed dark bruises on the child’s arms. That touched off a deep fear. The Feldmans brought their daughter to a doctor.

A freak incident, the doctors said. There was no genetic tie between Christina’s condition and Laura’s death. Christina would go through five years of intense treatment, through all the ports and tubes and injections. Her parents, again, were always there to comfort her.

The Feldmans are devout Catholics. After each session, Christina’s mother and father would drive her to the Catholic Shop in Syracuse to buy a medal. She would take her time in choosing one. It was a reward, one small pleasure after all the pain.

A day came when the doctors told the Feldmans: Your daughter is in remission for life. 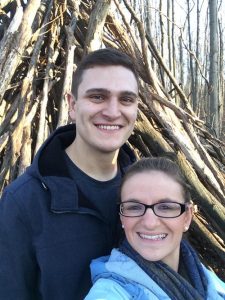 Michael and Christina Feldman. (Photo courtesy of the Feldman family)

Choose to be happy. Christina learned the code. Another child, Michael, was born in 1992. The Feldmans became fixtures in the Strathmore neighborhood of Syracuse. They loved their parish, Most Holy Rosary. Father and son shared a passion for Little League baseball. Bernie and Michael often played catch in nearby Onondaga Park.

What they had suffered only made what they had all the more precious. Nancy ran a small child care business, from their home. The three surviving Feldman children grew into adults. Sarah gave birth to the first grandchild, Elizabeth. On a winter’s day in 2011, Sarah, 27, mentioned to her family that she had a nagging cold.

She took some over-the-counter cold medicine. The doctors would later say that it touched off a reaction with prescription medications. She went to sleep, a nap to shake off a simple bug.

It was another impossible blow. “Like falling off a cliff and hitting hard at bottom,” Christina said. The Feldmans, again, did their best to regroup. Nancy was the rock, the center. She taught her children that someone always had it worse. When Christina would ask “Why us?” about family loss, Nancy would say: “Why not us? Why should hard things happen to someone else?”

As for Bernie, he told friends his life was a three-legged stool: There was his faith, his family, and his friends.

That philosophy is up against the most extreme of tests. A year ago, Nancy felt intense pain in her side. She put off getting it checked, telling herself the discomfort wouldn’t last. Once she gave in, the doctors ran some tests. She had colon cancer. Nancy, 57, had rarely been ill.

The news, Bernie said, felt like “someone dropped a bomb into my lap.”

The disease moved quickly. The Feldmans lost Nancy in October. She never complained, never showed fear to Bernie or her children. A few weeks after her death, Bernie’s mother — a widow — had a massive stroke. Henrietta Feldman died in December in Corfu, near Akron.

The family knew just one response: It rallied again. “I’m always amazed at their strength and great faith,” said Lanno, a close friend of Nancy’s since the late 1980s. Their children went to school together. Lanno often helped out by caring for Sarah Feldman while Laura was being treated for leukemia.

Losing one child would be unbearable, Lanno said. But to withstand so much pain, and to retain the kind of balance her friends show every day?

The Feldmans say there is no other way. “My kids are living the serenity prayer,” Bernie said. “They understand — to a point — there are things you can control, and things you can’t.”

Christina and her husband, D.J. Wiegand, live with Bernie and Michael at the family home in Syracuse. The Wiegands have a 2-year-old, Danny. At Christmas, the Feldmans went out and got a tree. Danny’s excitement made the holiday.

“He’s sunshine,” Christina said of her little one, whose glee is a constant remedy as he thunders through the house.

Yet Christina has learned one thing: “Never say it can’t get worse,” she said.

At 23, Michael, the youngest, works for Onondaga County. He was always a strapping, healthy guy. In January, he noticed he couldn’t get rid of a cough. A few of his friends told him he probably had bronchitis. Just a bug, Michael figured. Still, he went to see a doctor, who ordered some tests. A day or two later, Michael got the call:

He had a mass in his chest, just above his heart. 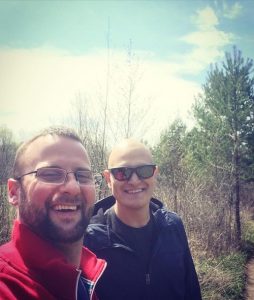 At first, Michael told no one in the family except his brother-in-law, D.J. He refused to believe it. But the tests came back with this result: They showed the mass to be a tumor. The cancer was centered in the thymus, a small organ in the breastbone. It had spread into Michael’s spine, making it stage four.

The Feldmans have all too much experience in the best way to react. Michael often travels to New York City for consultations at Memorial Sloan Kettering Cancer Center. He’s gone through radiation and is now receiving chemotherapy in Syracuse. The goal is to shrink the main tumor to a point where it can be removed, surgically.

Michael has shaved his head. No big deal, he said. He’d typically do it anyway, every spring, as part of the St. Baldrick’s effort to raise money for research into childhood cancer. Last week, at the kitchen table, Michael and Christina compared port scars, created decades apart. In their home, you feel no darkness or despair. Michael sees no point in it.

The doctors tell Michael there is a path, a way toward living with this cancer. He hangs onto his faith. He turns to his friends for support. He loves walking through woodland parks in Onondaga County, because nature is his therapy, his escape. As for sports, true to Bernie’s Western New York roots, Michael and his family embrace the Bills. They are also Mets fans who put a team cap in Nancy’s casket.

Sit with the Feldmans and you realize: Somehow, they find joy. Christina tries to assume the role she feels Nancy would have played. She tries to protect her brother, through sheer concern. Michael remembered one day, after chemotherapy, when he was in bed, nauseous, curled up beneath the covers. Christina came in and said: How are you feeling?

He told the tale. They looked at each other. They burst into laughter.

Their parish, their community, is rallying around them. The trips to Sloan Kettering are costly. Friends have started a GoFundMe account and a Facebook page for Michael, and there is a May 21 benefit at Most Holy Rosary in Syracuse. [See below for details.] As for Bernie, his thoughts always return to admiration for his son.

“We’ll never know how much pain he’s enduring,” Bernie said. “He chooses not to speak of it.”

Bernie has asked the doctors all the questions you’d expect. They tell him there is no environmental or genetic factor to connect everything his family has gone through. In Bernie’s words, it begins with a lightning bolt. And another. And another.

For more than 30 years, Bernie has watched his children cope with unimaginable hurt. He has lost two daughters and both his parents. He feels the absence of his wife in every corner of the house.

He is convinced Nancy is there, offering her help. He will close his eyes when he cannot find a cooking ingredient or some other little item, when some small problem suddenly makes the whole ordeal seem overwhelming, and he will ask her for help.

The moment passes. He’ll feel calm, then he’ll go to a drawer or a cabinet: Of course. There it is.

“So many times, if you’re quiet and kind of still, we just feel mom all around,” Christina said.

She and Michael, at the table last week, gently teased their dad. They explained the making of “Bernopedia.” From their earliest memories, Bernie always had the answer for everything. They’d walk in a park, and he’d explain why trees need bark to protect themselves. If they were puzzled by some word they’d never heard, he could explain the roots, the origins.

One question, above all else, cries out for an answer: Why should one family shoulder so much grief? Bernie doesn’t believe he’ll solve that mystery in this world. His response to his children, instead, is that same philosophy:

Choose to be happy.

Sean Kirst is a contributing writer for The Buffalo News.

•  For info: Contact Julie Sheridan at (315) 382-1960 or julie@holycrossdewitt.org, or visit www.gofundme.com/mikefcancer.