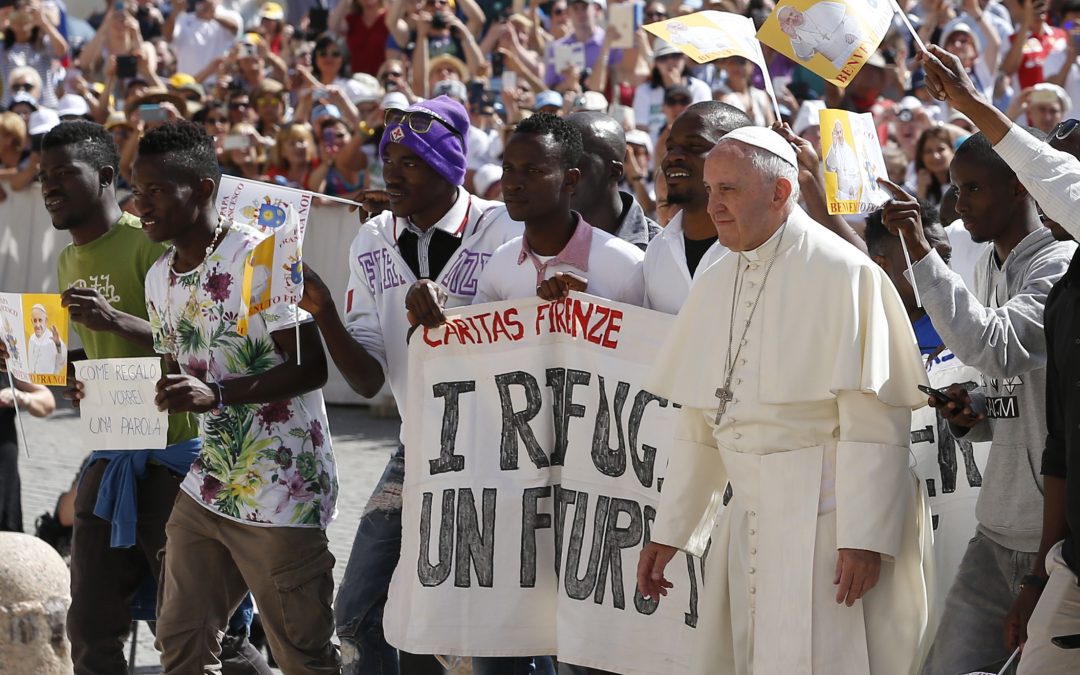 VATICAN CITY (CNS) — Flanked by a group of refugees, Pope Francis appealed to Christians to care for and welcome those whom society often excludes.

“Today I’m accompanied by these young men. Many people think they would have been better off if they had stayed in their homelands, but they were suffering so much there. They are our refugees, but many people consider them excluded. Please, they are our brothers,” the pope said June 22 during his weekly general audience.

The group, holding a banner that stated “Refugees for a better future together,” caught the pope’s attention as he was making his way to the stage in St. Peter’s Square. He signaled them to come forward and instructed aides to allow them to sit in the shade on the stage.

In his main talk, the pope discussed the Gospel story of the leper who begged Jesus to heal him, saying: “Lord, if you wish, you can make me clean.”

The pope noted that the leper not only asked to be “purified” in both body and heart, but also broke the law by entering the city to find Jesus in search of healing.

“Everything this man — who was considered impure — says and does is an expression of his faith!” the pope said. “This faith is the strength that allowed him to break every convention and try to meet with Jesus and, kneeling before him, call him ‘Lord.'”

The leper’s plea, he continued, serves as a lesson to Christians that “when we present ourselves to Jesus, long speeches aren’t necessary” and that there is no place to feel safe other than with God and his infinite mercy.

Jesus’ act of touching and healing the leper, an action forbidden by the law of Moses, is also an example for all Christians in helping the poor, the sick and the marginalized, the pope said.

When a poor person comes, he said, “we can be generous, we can be compassionate, but usually we do not touch him. We offer him a coin but we avoid touching his hand, we toss [the coin] there. And we forget that he is the body of Christ!”

By touching the poor and the excluded, he explained, Christians can be “purified of hypocrisy” and share concern for their condition.

After the leper’s healing, Jesus’ instruction to “show yourself to the priest and offer for your cleansing what Moses prescribed” highlights the importance of bringing those excluded back “into the community of believers and social life,” he said.

“He was excluded and now he is one of us. Let us think about our own miseries, each one has their own. Let us think with sincerity. How many times we cover them with the hypocrisy of ‘good manners’! It is precisely then that you need to be alone, get on your knees in front of God and pray, ‘Lord, if you wish, you can make me clean,'” Pope Francis said.

Saying he wanted to share something personal with the crowd, the pope said that each night he recites the leper’s prayer as well as five ‘Our Fathers,’ one for every wound of Christ “because Jesus purified us with his wounds.”

“This is what I do, but you can also do it in your homes. Say, ‘ Lord, if you wish, you can make me clean,’ and think about Jesus’ wounds and say an ‘Our Father’ for each one.’ And Jesus will always listen to us,” Pope Francis said.