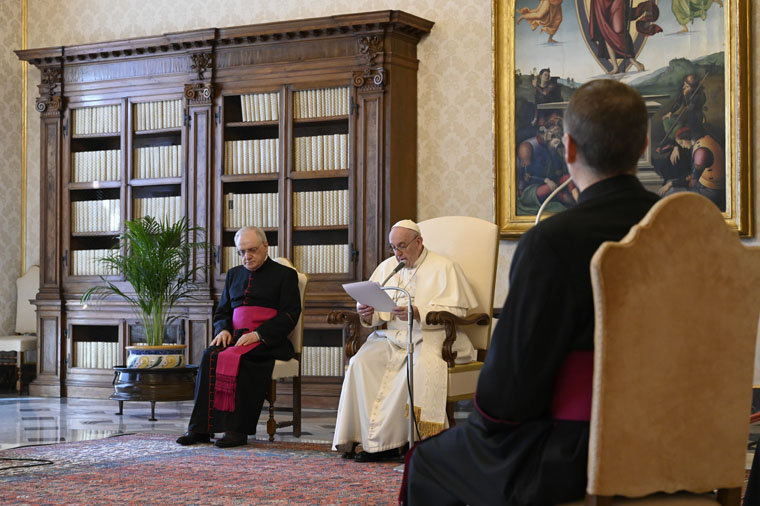 
VATICAN CITY (CNS) — The peace that is Christ’s gift to individuals and to humanity as a whole is not some superficial sense of calm, but an active force of reconciliation that calls for cooperation and self-giving, Pope Francis said.

The peace Christ offers “comes from his cross” and is “incarnated in an infinite host of saints, who are inventive, creative and always devise new ways to love,” Pope Francis said April 15 during the livestreamed version of his weekly general audience.

Continuing his series of audience talks about the Eight Beatitudes from Matthew 5:3-12, Pope Francis said he was pleased during Easter week to have reached the seventh beatitude: “Blessed are the peacemakers, for they will be called children of God.”

“The peace of Christ,” he said, “is the fruit of his death and resurrection.”

What Christ promises is not simply a sense of calm, which can indicate a “domesticated conscience,” the pope said. And, in fact, “spiritual growth often occurs precisely when our tranquility has somehow been disturbed.”

“Many times, it is the Lord himself who sows agitation in us so we would turn to him,” Pope Francis said.

And, in the context of war, he said, most people would understand peace as being the result either of one side conquering another or of both sides giving up something in order to make a peace treaty.

“We cannot but hope and pray that they always choose this second path,” the pope said, “but we also must take into consideration that history is an infinite series of peace treaties violated by later wars or by the metamorphosis of those same wars in other ways or places.”

And in the modern context of globalization based “mainly on economic interests, the ‘peace’ of some corresponds to the ‘war’ of others,” he said. “This is not the peace of Christ.”

Christ’s gift of peace, the peace he calls his followers to make, requires action and initiative, the pope said, because “love by its nature is creative — love is always creative — and seeks reconciliation at any cost.”

The Gospel describes as “children of God those who have learned the art of peace and exercise it, knowing that there is no reconciliation without the gift of one’s life and that peace should be sought always and everywhere,” the pope said. “Always and everywhere — don’t forget this.”

“This life as children of God, who, by the blood of Christ, seek and find their brothers and sisters, is true happiness,” he said.
In his greetings to Arabic speakers, the pope said that “peace is a gift of God and the fruit of a constant spiritual battle in following Jesus by carrying the cross each day because one who believes in God must translate that faith into love for all God’s creatures; it must transform itself into an instrument of peace with all one’s brothers and sisters.”

Greeting Polish-speakers at the end of the audience, Pope Francis also encouraged people to participate in devotions for Divine Mercy Sunday April 19.

He quoted the diary of St. Faustina Kowalska, who said Jesus told her he wanted a feast of Divine Mercy as a “refuge and shelter for all souls.”

“With trust we pray to the merciful Jesus for the church and for all humanity, especially those who are suffering at this difficult time,” the pope said. “May the risen Christ revive in us hope and the spirit of faith.”