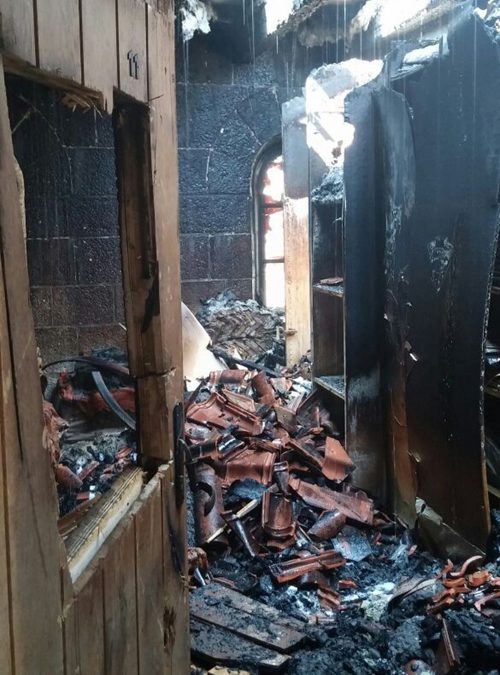 AMMAN, Jordan (CNS) — The Assembly of the Catholic Ordinaries of the Holy Land filed an official complaint to Israeli police against the leader of a radical Israeli movement over his remarks supporting and encouraging the burning of churches.

Father Pietro Felet, the assembly’s secretary-general, filed the complaint Aug. 7 against Israeli Rabbi Bentzi Gopstein and the Lehava movement on behalf of more than 20 patriarchs and bishops.

Rabbi Gopstein, who heads the Jewish anti-assimilation extremist movement, Lehava, said in early August that “churches and mosques could be burned,” asserting that “Jewish law advocated destroying the land of idolatry.”

The assembly’s statement was posted on the website of the Latin Patriarchate of Jerusalem. The assembly said the rabbi’s remarks “incite hatred and pose a real threat to the Christian religious buildings in the country.”

“The Catholic community in the Holy Land is fearful and feels in danger. A complaint was therefore filed Friday morning with the Israeli police,” the statement said.

It urged Israeli authorities to “ensure real protection for Christian citizens of this country and their places of worship.”

The Jerusalem Post and Haaretz newspapers reported that Farid Joubran, attorney for the Franciscan Custody of the Holy Land, demanded Israel’s attorney general and state prosecutor charge Rabbi Gopstein with incitement, “out of consideration of the public interest and of the present danger to churches and Christian communities in the country, and the real concern of further harm to them as a result of this incitement.” The Franciscans coordinate the reception of pilgrims to the Christian sites in the Holy Land and sustain the Christian presence there.

Catholic News Service tried to reach the Vatican-appointed custos, Franciscan Father Pierbattista Pizzaballa, but he was unavailable for comment. The custos is a member of the Assembly of the Catholic Ordinaries of the Holy Land.

Catholic concern is mounting as security challenges by Jewish extremists are growing with respect to religious buildings and Christians in areas under Israel’s sovereignty or control.

A June arson attack on the Benedictine Church of the Multiplication in Tabgha, Israel, caused millions of dollars in damage; it is believed to have been carried out by Jewish extremists.

The church is built on the spot where Christian tradition holds that Jesus miraculously multiplied five loaves and two fishes to feed 5,000 people who had come to hear him preach, according to the Gospel of St. Mark.

Hebrew graffiti found at the site read, “False idols will be smashed.” The phrase is part of the “Aleinu,” a prayer said three times a day by religious Jews.

Israel is considering labeling the arson as a terrorist attack, according to press reports.

The Council of Religious Institutions of the Holy Land reported that “about 43 churches and mosques were torched or desecrated” since December 2009, but it said not a single person has been prosecuted by the authorities.

The council, which is made up of the Chief Rabbinate of Israel, the heads of the local churches of the Holy Land and the Ministry of Islamic Waqf of the Palestinian Authority, said it was outraged by the arson and vandalism on the historic church in Tabgha.