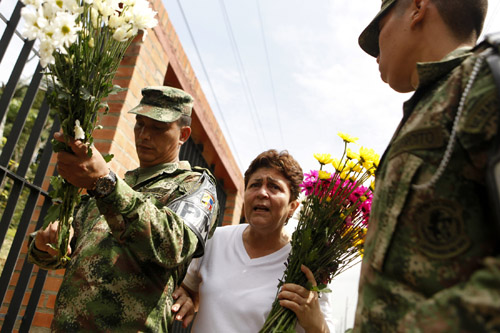 SANTO DOMINGO, Dominican Republic (CNS) — Pope Francis’ involvement in the Cuba-U.S. standoff helped solve the longest-running diplomatic freeze in the Americas. Now he is being asked to help bring an end to the Western Hemisphere’s longest-running armed conflict.

Members of Colombia’s largest rebel group asked for “the pope’s blessing for them and the negotiating table,” as they enter a third year of peace talks with the Colombian government, said Archbishop Luis Castro Quiroga of Tunja, president of the Colombian bishops’ conference. The armed guerrilla group has also requested a Catholic Church delegate to assist in negotiations.

Representatives of the Revolutionary Armed Forces of Colombia, FARC for its Spanish acronym, and the Colombian government are in Cuba negotiating a peace agreement that would formally bring to an end an internal armed conflict that has stretched more than five decades.

“We want to give Pope Francis a heartfelt greeting,” FARC leader Ivan Marquez told reporters in Havana. “We have a very positive attitude because we want the process to advance, in particular with the help of the Catholic world. The church can add all of its experience to help us arrive at a final agreement.”

A Vatican spokesman said that while Pope Francis supports promoting peace, he might look for a more opportune time to discuss the topic. He is not scheduled to meet with FARC representatives during his Sept. 19-22 trip to Cuba.

Assistance from the Catholic Church and Pope Francis would legitimize the rebels’ position in a critical stage of negotiations, as polls show public support for a peace agreement waning, said Cynthia Arnson, director of the Latin American Program at the Washington-based Wilson Center.

“The FARC would be very keen on injecting a Christian sense of forgiveness into the peace talks because what they most resist is the notion that anyone in the FARC should do jail time for violations of international humanitarian law, of which there are legions of examples,” she said in a phone interview from Bogota.

Pope Francis plans to visit Colombia, probably next year as part of a trip to South America, the Vatican said in April. The pope’s assistance could help inject new life into talks that have dragged on since 2012. The FARC and the government remain distant on key points, including reparations for victims and disarmament of the guerrilla groups.

The people of Colombia should “not lose energy or hope to the difficulties that this work involves and continue to work for truth, justice, reparations and the guarantee it will not be repeated,” said a letter from Cardinal Pietro Parolin, Vatican secretary of state, to the Colombian bishops’ conference when the pope’s plan to visit was announced.

“We will receive (Pope Francis) with open arms and hearts as a messenger of peace and reconciliation,” said Colombian President Juan Manuel Santos.

Since around 1964, the government, multiple guerrilla groups — including FARC — paramilitaries and organized crime groups have been involved in the conflict, which has killed at least 220,000 Colombians and displaced another 5.7 million, according to the National Center for Historic Memory.

Violence has calmed significantly since the heydays of the conflict, when Colombia became known as one of the world’s most dangerous countries. The murder rate hit a 10-year low in 2013, according to the Colombia’s National Institute of Legal Medicine and Forensic Sciences.

“There’s a definitely a recovery of support for the peace process because violence has continued to go down,” Arnson said.

But negotiations have been regularly set back by periodic bouts of violence and terrorism. FARC rebels have routinely attacked government-run oil pipelines and security forces. The Colombian government has responded with bombing campaigns and raids on FARC camps.

As a result, public support for a peace agreement has plummeted. For the first time since 2012, more Colombians (46 percent) favored a military solution to the conflict over a peace agreement (45 percent), according to a Gallup poll published in July. The results fell within the 3 percent margin of error.

“Every time violence spikes because the FARC does something like massacres 11 soldiers or blows up pipelines, there’s a furious response against the peace process,” Arnson said.