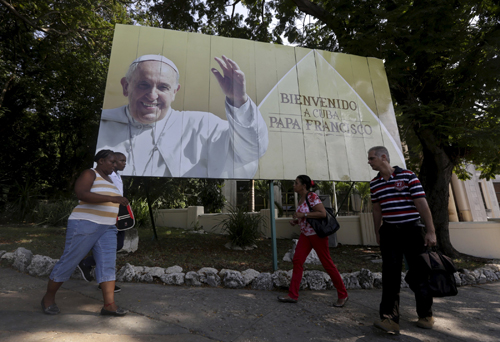 VATICAN CITY (CNS) — Pope Francis’ 10th foreign trip will be the longest of his pontificate and, with stops in Cuba, three U.S. cities and the United Nations, it also will be a “very complex trip,” the papal spokesman said.

Briefing reporters about the trip, Jesuit Father Federico Lombardi, Vatican spokesman, said the plans were “enriched” after Pope Francis agreed to go to the World Meeting of Families in Philadelphia and, particularly, after the United States and Cuba announced they were moving toward normalizing diplomatic relations.

The pope will be away from the Vatican Sept. 19-28 and is scheduled to give 26 formal speeches — only four of them entirely in English, Father Lombardi said. The all-English texts are prepared for Pope Francis’ visit to the White House Sept. 23, his address to a joint meeting of Congress Sept. 24, his meeting with U.N. staff members Sept. 25 and his thank you to trip organizers in Philadelphia Sept. 27.

His address to the U.N. General Assembly will be entirely in Spanish, Father Lombardi said. Other speeches in the United States either will be in Spanish or a mixture of Spanish and English, but translations will be provided.

Responding to rumors and questions that have arisen surrounding the trip. Father Lombardi said: