Congress urged to ensure ‘fair and just wages’ for all workers 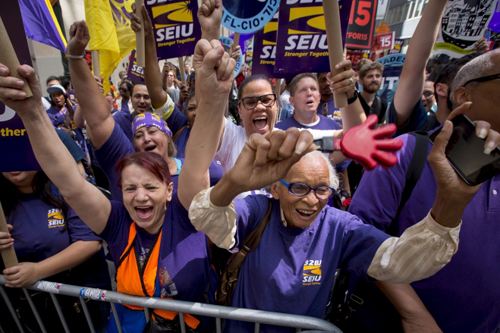 “An economy thrives only when it is centered on the dignity and well-being of the workers and families in it,” said the letter signed by Sister Markham and Archbishop Wenski, chairman of the Committee on Domestic Justice and Human Development of the U.S. Conference of Catholic Bishops.

“As pastors and service providers, we see every day the consequences when society fails to honor this priority,” they said, noting that the federal minimum wage does not support stability among low-wage workers and increases the demand for social services.

In late July, Sen. Bernie Sanders, I-Vermont, who is a presidential candidate, introduced the Pay Workers a Living Wage Act, which proposes to gradually increase the current federal minimum wage of $7.25 over the next five years until it reaches $15 per hour in 2020.

A similar bill also is under consideration by a House committee.

The letter, quoting St. John Paul II’s 1991 social encyclical “Centesimus Annus” (“The Hundredth Year”), said: “Society and the state must ensure wage levels adequate for the maintenance of the worker and his family, including a certain amount for savings.

“This requires a continuous effort to improve workers’ training and capability so that their work will be more skilled and productive, as well as careful controls and adequate legislative measures to block shameful forms of exploitation, especially to the disadvantage of the most vulnerable workers.”