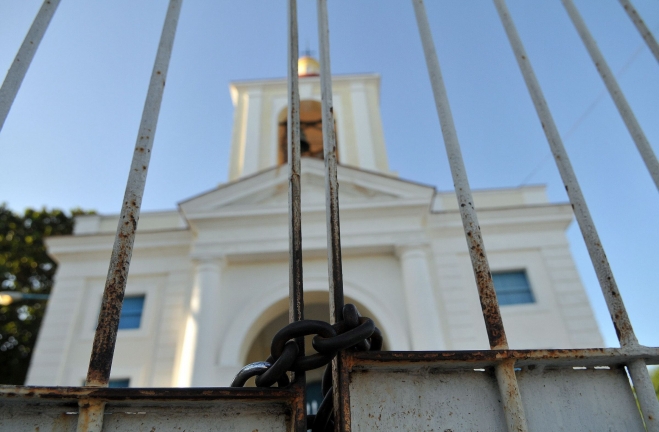 WASHINGTON — Ever since Pope Francis’ visit to Cuba was announced, Cuban church officials have billed him as the “missionary of mercy.”

And it’s an important mission, some Cubans say, so that the country and its people — living in and outside of Cuba — can move forward. The pope’s message of mercy is exactly what Cuba needs, some say.

The presence of Pope Francis can bring about a spirit of forgiveness among Cubans, he said.

“I think that that is most important at this point, there has to be reconciliation, and there has to be giving up of old concerns, of old doubts, old fears, old hurts that have accosted us” and divided Cubans, he said.

Azcarate will travel with his wife and daughter to the island for the pope’s Sept. 19-22 visit, and they plan to attend the Sept. 20 Mass in Havana’s Revolution Square.

“It is important to be present,” during the pope’s visit, he said, and “to give support to the church in Cuba.”

Azcarate recognizes that not all Cubans, in or out of the island, are happy about the pontiff’s visit, which will include a meeting with President Raul Castro, who, along with brother Fidel, has ruled the country since 1959.

“I think there’s a group that is cautiously concerned about always the communist government manipulating … of trying to twist his visit,” he said. “But the important thing, in my opinion, is that he is going to be there for the people.” He will be there for those who “need a voice of hope and a voice of consolation,” including clergy and religious who work under difficult missionary circumstances, he said, and who need a voice of hope and of mercy.

Oscar Gongora of New Jersey left Cuba 23 years ago, and he said that, while the pope’s visit may lift the spirits of some, it will not bring about the change he would like to see in Cuba. Previous papal visits have resulted in some progress, he said, yet Cuba remains under a dictatorship and one that harshly persecuted Catholics and other Christians.

That’s why, he said, he does not believe there’s anything authentic about Raul Castro’s comments made after a May 10 visit at the Vatican with the pope: “I could start praying again and return to the Catholic Church.”

“The regime,” he said, “will do what’s best for it,” and with sources of funding drying up, it is simply looking for an opportunity to hold on to power.

Following the 1959 revolution, Cuba declared itself officially atheistic. Catholics could not be members of the Communist Party. Recently, on a web page promoting the apostolic visit, a section labeled “Fidel and Religion” addressed some of the discrimination against Christians that took place. It is based on a past interview with a Dominican priest known in Latin America as “Frei Betto.”

“Fidel admitted frankly that there was discrimination in the first decades of the Revolution,” the page reads.

It then adds a quote by Fidel Castro addressing the topic, saying that while “subtle discrimination of Christians” took place at the start of Cuban revolution, it was not intentional or planned.

Much has improved between the government and the Catholic Church since the early days of the revolution. The church is close to finishing construction of its first new cathedral in 50 years. Catholics can openly attend Mass and can now even be members of the Communist Party. But the church still has no permission to resume Catholic education on the island or to purse its mission in institutions such as orphanages or hospitals, as it did in the past.

That’s why, even though there has been progress some, like Gongora, say they have a hard time finding trust. What’s worrisome to him, Gongora said, is having the church “negotiate” with the government and having any sort of relationship.

“It worries me, it saddens me,” he said.

Enrique Cabrera Napoles, founder of Cuba’s Holy Childhood Association who lives in Camaguey, Cuba, said the church always holds hope of what a papal visit can bring, but people must consider the spiritual landscape that comes with five decades of the erosion of Catholic Cuba. Many Cubans will go out to see Pope Francis, just as they went out to see St. John Paul II and Pope Benedict XVI. But a papal visit can only do so much, he said.

According to the Vatican, 53 percent of the island’s 12.7 million or so inhabitants are said to be Catholic. Yet some estimate that anywhere from 1.3 percent to 10 percent of those practice the faith. True estimates of Catholics on the island are hard to gauge.

While many Cubans know who Pope Francis is, not everyone will see him as a moral authority.

“Some know that someone called ‘the pope’ is coming,” he said. “But in reality, they don’t know who he is. For the people of Cuba, he is a functionary of the church, and for the church, the Holy Father is coming.” Cabrera said he would like to have seen churches filled with more faithful as a result of previous papal visits, because he looks at some of the churches now and wonders about all those who showed up to see past popes.

“Those people, where are they?” he wondered.