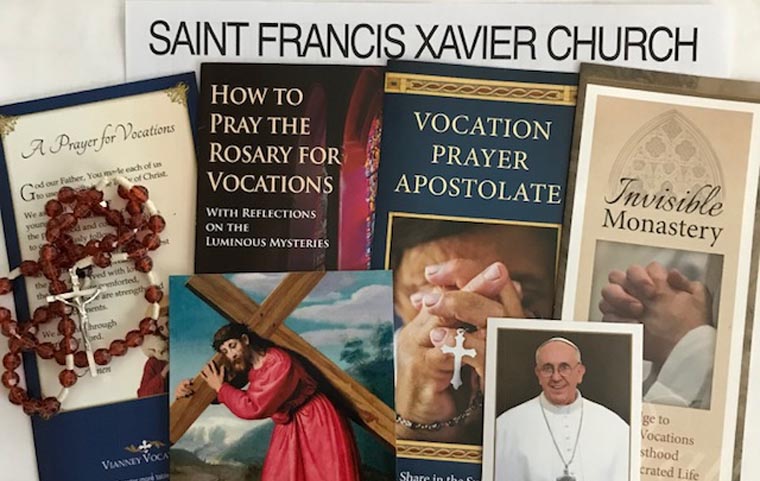 Every year, he counts on the efforts of those who are homebound

The homebound, the elderly, and the sick have enormous power, Deacon John Falge says.

“Their prayers got me ordained,” he said. “What more could they ask? Like a big prayer to St. Jude for me.”

Deacon Falge would like those people, whom he considers to be the No. 1 resource for vocations, to keep praying for more vocations to the priesthood, the diaconate, and women’s religious orders.

So for Advent, the deacon at St. Francis Xavier Church in Marcellus will continue his annual practice of sending packets to people who can’t get to church or to the Thursday night rosary meeting because of a disability or a sickness. He called it “their own quiet ministry within their home to pray for vocations.” The packets are courtesy of Deacon Falge and the pastor, Father Daniel Muscalino.

A member of the Third Order of Saint Francis, a doctor of laws, and a former police chief in Syracuse, Deacon Falge said the packets include rosaries and prayer guides. “They really enjoy it because they feel they are a part of the parish,” he said, and they feel they are contributing to “Jesus’ army.”

He tells the people that the Church and the Lord need their prayers in order to draw people to vocations. One woman is about 95 years old and she can’t wait to receive the packet, he said.

By praying for vocations, he said, people who are homebound think: Oh, they need my help; I can do something sitting on my couch. Deacon Falge figures their prayers have definitely helped the diocese ordain priests. Another diocesan priest will be ordained in June 2018.

What might be considered a bonus for the people who prayed for Deacon Falge is that he gets along great with the other members of his diaconate Class of 2016. “Very fortunate,” he said. They meet for coffee every month, and this November they will go on their sixth retreat together. It includes rosary recitation, Benediction, and Mass.

The Class of 2016’s closeness is a result of the people’s vocation prayers, Deacon Falge said — “without question, no ‘ifs,’ ‘ands,’ or ‘buts’ about it.”