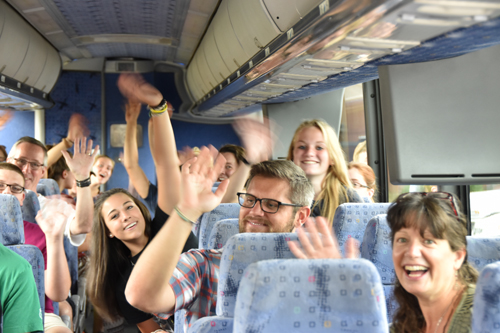 The diocesan Office of Youth and Young Adult Ministry is leading a group of 45 pilgrims to Poland for World Youth Day July 22 to August 3.

World Youth Day, an international gathering of young faithful, will take place “in and around Krakow July 26-31, with Pope Francis leading events July 27-31, including a closing overnight vigil and Mass that is expected to draw as many as 2 million attendees from around the world,” according to Catholic News Service.

The World Youth Day trip will “change their lives,” Office of Youth and Young Adult Ministry Director Bob Walters said of the pilgrims. “They’ll get to see a global church, a church that’s joyful.”

Members of the group departed by bus from Bishop Grimes Jr./Sr. High School in East Syracuse this morning, bound for JFK airport. (See photos below.)

The group of pilgrims is a mixture of youth and young adults, Walters said, and includes members of parishes and Catholic schools from across the diocese.

Bishop Robert J. Cunningham is traveling with the group, making his first pilgrimage to a World Youth Day gathering. Msgr. John Putano, Southern Region Vicar, and Father Joe O’Connor, director of the Office of Vocation Promotion, are among the pilgrims as well.

During their pilgrimage, diocesan pilgrims will pray with Pope Francis at Mass and Stations of the Cross, participate in catechesis and cultural events, and visit holy sites in cities including Warsaw, Wadowice, and Prague.

Dispatches from pilgrims will be highlighted here on thecatholicsun.com throughout the pilgrimage as well as featured in upcoming issues of the Sun.

World Youth Day, “from the individual’s perspective, is an encounter with the Lord,” Walters said. “If they’re already in a relationship with him, they’re going to go deeper. If they’re on the fringes, they will experience him in a very powerful and dramatic way. It does change the lives of everybody who goes on that trip.”

Bishop Cunningham has asked the people of the Diocese of Syracuse to pray with the pilgrims by reciting the following World Youth Day prayer on a daily basis during the event:

“God, merciful Father,
in your Son, Jesus Christ, you have revealed your love
and poured it out upon us in the Holy Spirit, the Comforter,
We entrust to you today the destiny of the world and of every man and woman.”
We entrust to you in a special way
young people of every language, people and nation:
guide and protect them as they walk the complex paths of the world today
and give them the grace to reap abundant fruits
from their experience of the Krakow World Youth Day.

Heavenly Father,
grant that we may bear witness to your mercy.
Teach us how to convey the faith to those in doubt,
hope to those who are discouraged,
love to those who feel indifferent,
forgiveness to those who have done wrong
and joy to those who are unhappy.
Allow the spark of merciful love
that you have enkindled within us
become a fire that can transform hearts
and renew the face of the earth.

Bishop Cunningham stops for a photo with two of the pilgrims. (Sun photo | Katherine Long)

The group was all smiles as they prepared to depart. (Sun photo | Katherine Long)

And they’re off! The bus will pick up more pilgrims en route to JFK airport, and the group will take off for Poland this evening. (Sun photo | Katherine Long)