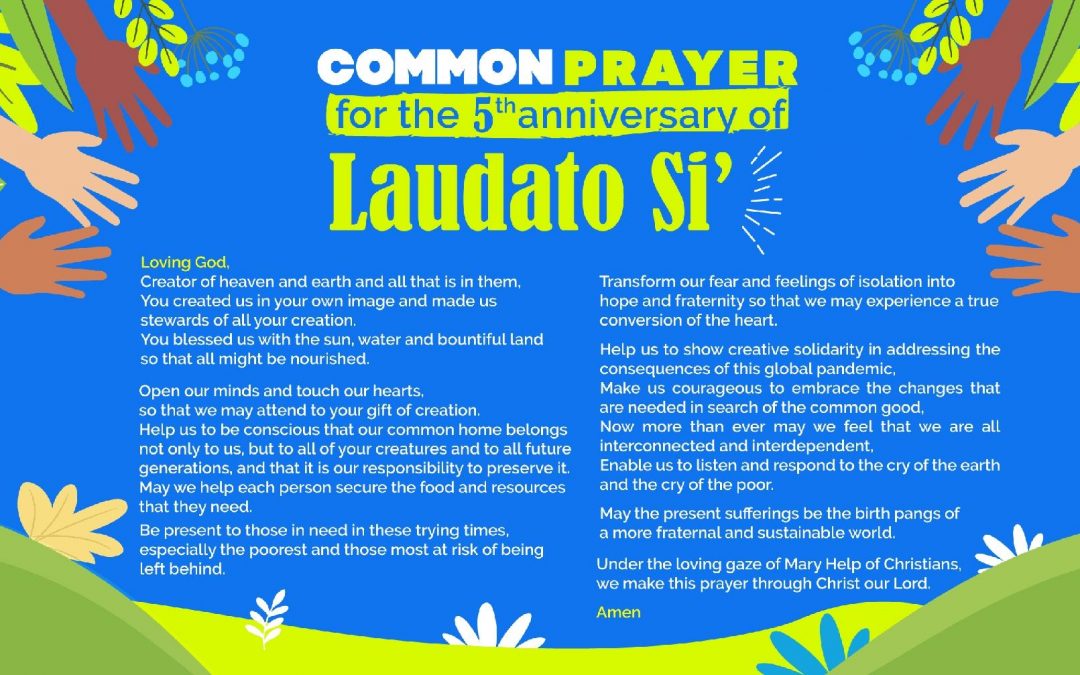 Five years after Pope Francis issued his encyclical letter Laudato Si’ (“Praise Be”): On Care for our Common Home, in the spirit of his namesake St. Francis of Assisi, its words remain relevant and timely. Members of a local diocesan task force work to share the encyclical’s message and are encouraging the faithful to celebrate a special “Season of Creation” this fall.

The encyclical, released in May 2015, is composed of six chapters that focus on challenges, God’s ways, and a path forward.

Challenges are identified in Chapter 1, “What is Happening to our Common Home”: pollution, climate change, water, biodiversity, human life quality decline, and global inequality. Chapter 3, “The Human Roots of the Ecological Crisis,” notes that “…technological products are not neutral, for they create a framework which ends up conditioning lifestyles and shaping social possibilities. Decisions which may seem purely instrumental are in reality decisions about the kind of society we want to build” (paragraph 107).

God’s ways are discussed in Chapter 2, “The Gospel of Creation” and Chapter 4, “Integral Ecology.” “The earth is the Lord’s” is proclaimed in Psalm 24, verse 1. Creation can “only be understood as a gift from the outstretched hand of the Father of all, and as a reality illuminated by the love which calls us together into universal communion” (paragraph 76). And “…all of us are linked by unseen bonds and together form a kind of universal family” (paragraph 89). Do we understand this more fully now as an outcome of COVID-19? “We are part of nature, included in it and thus in constant interaction with it” (paragraph 139).

A path forward is outlined in Chapter 5, “Lines of Approach and Action,” and Chapter 6, “Ecological Education and Spirituality.” It includes a reverence for life in all its interconnected forms and a renewed appreciation for natural beauty and for God. We must “encourage a ‘culture of care’ which permeates all of society. When we feel that God is calling us to intervene with others in these social dynamics, we should realize that this too is part of our spirituality, which is an exercise of charity and, as such, matures and sanctifies us” (paragraph 231). God’s Earth is not simply a storehouse of resources for human consumption; rather it is filled with interconnections that profoundly affect each of us.

Inspired by Laudato Si’, a group of people in the Syracuse Diocese were moved to form the “Laudato Si’ Task Force.” The group was initially co-chaired by Father George Coyne, SJ, from Le Moyne College, who died in February 2020, and Sister Caryn Crook, OSF. Members include diocesan, parish, school, and community leaders who are inspired by the encyclical.

The mission of the Diocese of Syracuse Laudato Si’ Task Force is to promote and encourage prayer, liturgy, dialogue, and actions promoting the beauty and value of God’s creation. The goal is conversion of individuals and communities to responsible action in support of healing and preserving our common home. Members of the task force reach out to parishes and Catholic schools while also challenging themselves to change their own ways in order to care for our common home.

The first initiative of the task force was a symposium held at Le Moyne in September 2015. Following that, on Earth Day in April 2016, Father Coyne, a former Vatican astronomer, and Sister Crook visited Catholic schools to present the encyclical’s message. The following year, 23 parishes, two Catholic elementary schools, a Catholic high school, and two colleges made efforts to recognize the importance of caring for God’s Earth. To help parishes spread the message, the task force created Faith Formation materials about Care for Creation and offered them throughout the diocese. Bishop Douglas J. Lucia met with task force representatives in early 2020 and expressed support for their work; a few months later he created a short video clip to commemorate the fifth anniversary of Laudato Si’.

This year the local Task Force encourages individuals, parishes, and schools to participate in the upcoming “Season of Creation” to be celebrated worldwide September 1 through October 4. The Global Catholic Climate Movement offers a Season of Creation Guide that can be used to increase love, appreciation, and action in care for God’s Earth. For more about this upcoming season, visit www.seasonofcreation.org.

For more information about the Laudato Si’ Task Force, contact Dave Babcock of St. Augustine’s Parish in Baldwinsville, at dave.babcock21@gmail.com or (315) 263-9023.