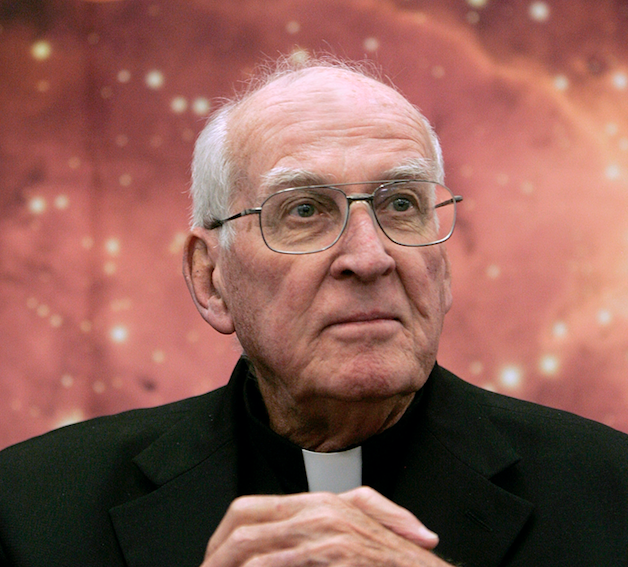 It seems only right that Jesuit Father George V. Coyne’s name is forever written among the stars.

Located in the asteroid belt, the body was officially designated SPK-ID: 2014429, Dr. LeMura said, but “when astronomers discover something new, they get to give it a real name. And so these two researchers chose to name it after their colleague, George Coyne, SJ.”

“Now 14429 Coyne, like most asteroids, is beautiful and unpretentious — unlike those glory-hog planets that grab all of the attention,” she continued, drawing laughter from the assembly. “How appropriate that this heavenly body should carry George’s name through the heavens.” 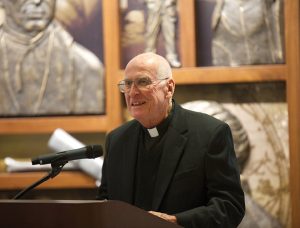 Father Coyne, a world-renowned astronomer who served as director of the Vatican Observatory for 28 years and joined the faculty of Le Moyne College as the first McDevitt Chair in Religious Philosophy in 2012, died at Syracuse’s Upstate University Hospital Feb. 11 after a battle with cancer. He was 87.

He was remembered by family, friends, colleagues, and fellow clergy from the Jesuit community and the Diocese of Syracuse Feb. 17 as a humble man of deep faith and generous spirit who remained curious and hard-working throughout his life.

Born January 19, 1933, in Baltimore, Md., Father Coyne entered the Society of Jesus June 30, 1951, and was ordained to the priesthood June 12, 1965. He is survived by two of his eight siblings, brothers Francis Coyne and Thomas Coyne, and many nieces and nephews. In remarks offered during the Mass, Thomas remembered fondly his brother’s years in Jesuit formation and affirmed that the compassion and concern Father Coyne showed to others came from the example of their parents, Frank and Elizabeth Coyne.

Father Coyne’s work in astronomy included the study of the surfaces of the moon and of Mercury; interacting binary star systems that give off sudden bursts of intense energy; and Seyfert galaxies, a group of spiral galaxies with small and unusually bright star-like centers. 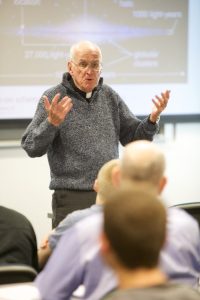 Father Coyne’s work in science and his personal belief in God placed him squarely at the intersection of faith and reason. He was known for advancing a position he arrived at as a result of the intertwining of his scientific knowledge and his understanding of his faith: his rejection of intelligent design as a scientific explanation for the creation of the universe.

“Evolution is the best scientific explanation we have for all the data we have about the universe and everything in the universe, including all life forms and ourselves,” Father Coyne told the Sun in 2012. Intelligent design, on the other hand, he said, which posits that the universe is so complex it couldn’t have come together unless God, the intelligent designer, put it together, is not science.

Rather than seeing God as a “watchmaker,” Father Coyne said, he saw “a marvelous God” who willed the universe into being and who “made a universe that has a creativity of its own through evolution.”

In a 2005 piece published in British Catholic publication The Tablet, he wrote that he believed “God in his infinite freedom continuously creates a world that reflects that freedom at all levels of the evolutionary process to greater and greater complexity. God lets the world be what it will be in its continuous evolution. He is not continuously intervening, but rather allows, participates, loves.”

Over the course of his career, Father Coyne published more than 100 articles in reviewed scientific journals, was the author and editor of a number of books, and was awarded 11 honorary doctorates. He received Villanova University’s Mendel Medal in 2008 and the George Van Biesbroeck Prize from the American Astronomical Society in 2010. 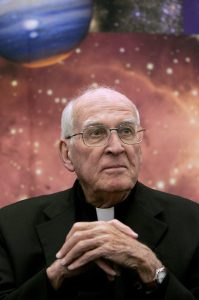 But accomplishments and accolades did not fully define Father Coyne.

“It’s impossible to describe George,” said Jesuit Brother Guy Consolmagno, current director of the Vatican Observatory and a longtime colleague and friend, in his reflection on the liturgy’s readings. “I could list all of his scientific work, his writings on faith and science, his honors, his degrees — that would take about 20 minutes, if I read fast. But none of those are George.”

Father Coyne could disarm those who tried to debate him “because they weren’t prepared for someone who wasn’t mad at them, who didn’t want to argue at them. He honestly wanted to learn from them and to hear what they had to say,” Brother Consolmagno said. “And if he would argue — which he was very capable of doing and not afraid to do — it would be with and not against. That trait was a part of his scientific life and also his Jesuit life.”

Father Coyne was “a pastor to the astronomers,” Brother Consolmagno said, delighting in celebrating baptisms and weddings for the children of his scientist friends.

“George was a capo, a boss, he was a pastor, he was a role model and a friend to an entire generation of young astronomers on their way to their doctorates,” he said.

“I’ve gotten more than 100 emails from colleagues, friends, and alumni, from every corner of the globe — from him they learned astronomy, but also the joy of learning and the love of sharing what we’ve learned with each other.” 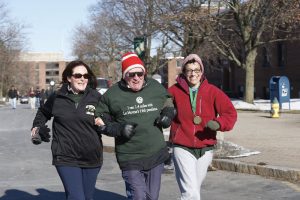 Father George Coyne participates in a 1.4-mile fun run on the Le Moyne College campus March 19, 2015. The run was one of the events leading up to the inauguration of Dr. Linda LeMura (right) as the college’s 14th president — and the world’s first lay female president of a Jesuit college or university. The run also raised money for LeMura’s alma mater, Cathedral Academy at Pompei. Father Coyne and Dr. LeMura are accompanied by Sharon Kinsman Salmon, chair of Le Moyne’s board of trustees. (Sun photo | Chuck Wainwright)

“Our honorary degree criteria includes someone who is ‘distinguished for scholarly achievement’ and has made ‘significant contributions to the welfare of the community, whether on a local, state, national or international level,’” Dr. LeMura told the Sun in an email. “Father Coyne certainly meets that criteria, and his views on the reconciliation of science and religion helped change the Church’s perspective on this controversial topic. He also fit the criteria of serving as a role model for our students, as his life’s work perfectly modeled the type of individual others should emulate.”

Given his status as a world-class scientist, Dr. LeMura had been a fan of Father Coyne for decades. When they met, “I was struck by how humble and unpretentious he was. I knew immediately that he would be a perfect fit for Le Moyne, where he would be able to return to his true passion — teaching.

“His scholarship personified an interdisciplinary and integrated approach to teaching and learning. He had a natural penchant for eliminating academic silos, making him the ideal person to become the McDevitt Chair in religious philosophy and physics. We committed to giving him the time and flexibility needed to continue to speak to audiences around the world. And I knew he would be welcomed by our wonderful Jesuit community.”

Dr. LeMura told the assembly Feb. 17 that after that first meeting, “I pursued him relentlessly.” Father Coyne ultimately assented, promising “to stay for at least a short while, if only I would stop hounding him.”

“That was eight years ago. George told me more than once he fell in love with Le Moyne College, or as he called us, a learning family,” she said.

Dr. LeMura referenced Jesuit Father James Martin’s quote in The New York Times obituary of Father Coyne: “‘George was one of the pre-eminent figures in the Catholic world who could speak intelligently and articulately about both science and faith. And George, by nature a humble man, could often dazzle.’ And like a shooting star, dazzle us he did.”

“I’m not sure when 14429 Coyne will next pass overhead,” she said in closing. “But I do know that when I look up into the night sky, into that dark sublime, I will think of Father George Coyne, SJ, and thank God for the light he brought to my life and to the lives of our students.”

Father Coyne’s scientific interests extended beyond the field of astronomy.

At the 2015 release of Pope Francis’ encyclical on care for creation, “Laudato Si,” the Sun asked Father Coyne what readers should take away from the document.

“Sustaining the Earth is urgent,” he said. “There is no time to lose. Each one of us must be informed, take the obvious necessary actions and encourage others to do so. Action at the level of government agencies and international NGOs [nongovernmental organizations] is absolutely necessary but is not an excuse for action at the local level — that means me!”

Father Coyne would later serve as co-director of the Laudato Si Task Force, a group in the diocese focused on promoting the purpose of the encyclical.

Theresa May, associate director of the diocesan Office of Faith Formation and a member of the group, recalled Father Coyne as an “amazing, warm, generous, caring person” who was able to “marry science to faith.” His “profound love for God [was] so deep and so rich,” she said. 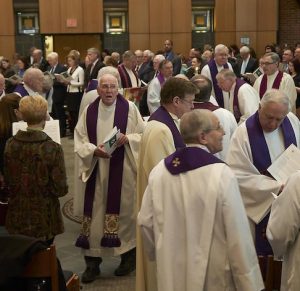 Father Coyne brought that love of God to people across the diocese through speaking engagements and liturgies. Father Coyne could often be found at Epiphany Parish in Liverpool, where he regularly celebrated Masses as a weekend associate.

“As a priest, he was right down to earth,” said Father Dan O’Hara, Epiphany’s pastor. Father Coyne would talk or sit with anyone. “It was never about him. It truly was about Jesus Christ, across the board.”

Deacon Nick Alvaro, who previously served at Epiphany Parish, also recalled Father Coyne as humble and unassuming in addition to being “completely brilliant.”

Deacon Alvaro said he often uses a closing prayer he learned from Father Coyne; appropriately, it is both poetically spare and deeply profound: “Lord God we trust that you hear and answer our prayers because we ask in the name of your son, Jesus.”

“First, his instructions to each of us when we arrived at the Vatican Observatory…. Simply: ‘do good science.’ The science itself was the goal. And he gave us the space to make it happen. But what makes science itself a worthy goal?

“And George would say, ‘In us the universe has become self-aware,’” Brother Consolmagno said.

“It is by being aware of the universe that we become aware of the Creator. We, ourselves, creatures of that very same Creator become the consciousness of creation. And in that truth we find joy, and in that joy we find God. That’s what it means to be a scientist and that’s what it means to be a Jesuit. Find God in all things! Find God in the cosmos. That was George. And that was why we found God in him.”