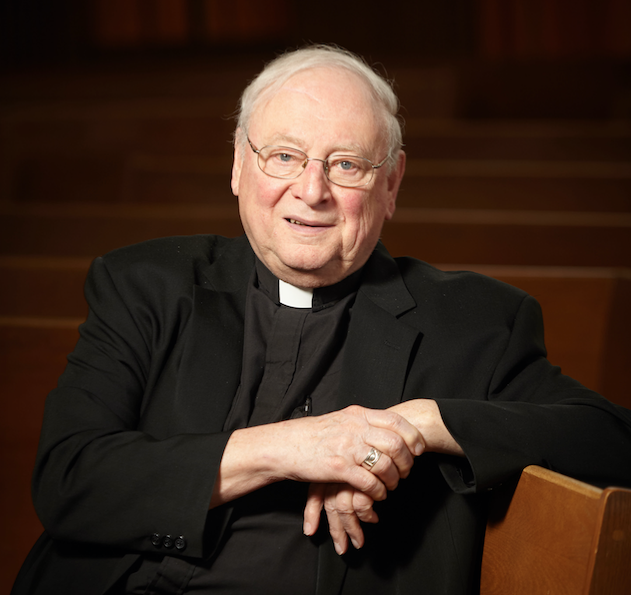 Auxiliary Bishop Thomas J. Costello is pictured at the former Our Lady of Lourdes Church in Syracuse in 2011. Bishop Costello served at the parish 1954 to 1959 and 1975 to 1978. (Sun photo | Chuck Wainwright)

Auxiliary Bishop Thomas J. Costello, a native son who served the Diocese of Syracuse for nearly 65 years, died Feb. 15, eight days short of his 90th birthday. The big man with a booming voice and a bigger laugh will be remembered for his commitment to social justice, support for his brother priests, and quick wit.

He died at Francis House in Syracuse after several weeks of declining health.

“Every area of the diocese has known his tender pastoral care,” Bishop Robert J. Cunningham said in a statement. “He has been an ardent supporter of Catholic education, serving at one time as Superintendent of Schools for the Diocese. His personal generosity enabled many young people to receive a Catholic education in our schools. Thousands of young people throughout the seven counties of our diocese have heard his strong voice as they received the sacrament of Confirmation from him.”

Bishop Cunningham praised the longtime auxiliary bishop for living “a simple life, consistently reaching out to the poor and needy — a friend, as Pope Francis would say, to those on the peripheries. He has been a brother to the priests of the Diocese, a friend to the deacons, a champion for the men and women religious, a father figure to all the faithful.”

Bishop Costello was ordained a priest in 1954 and ordained auxiliary bishop in 1978. He assisted six of the diocese’s 10 bishops and served under seven popes. He held numerous administrative positions in the diocese, including overseeing the school system during a period of tremendous growth from 1960 to 1975. He retired as auxiliary bishop in 2004. He resigned as vicar general, or assistant to Bishop Cunningham, in 2009.

In his nearly nine decades, Bishop Costello witnessed historic moments in the church and society. As a young priest he spent time in Rome, observing proceedings of Vatican II (1962-1965). Bishop Costello referred frequently to Vatican II themes: increased participation of the laity through Baptism and Confirmation, the importance of ecumenism and interfaith dialogue and relationships, and Pope John XXIII’s call to “Throw open the windows of the church and let the fresh air of the spirit blow through.”

He returned to the diocese hopeful that Vatican II reforms would re-energize the Catholic Church. He was the first priest of the diocese to celebrate the post-Vatican II Mass, demonstrating to clergy new protocols, which included facing the congregation and using English rather than Latin. He listened to Catholics — some excited and others shocked — as parishes removed altar rails and experimented with folk music during Mass, women religious exchanged habits for street clothes, and both priests and nuns left their ministries.

Secular society was changing, too. Amid the Civil Rights movement, opposition to the Vietnam War, and activism targeting injustice of all kinds, Bishop Costello found inspiration and motivation from his friend and mentor, Msgr. Charles Brady (1901-1978). Brady, namesake of the Brady Faith Center on Syracuse’s South Side, had worked with the urban poor and people of color since 1946.

In March 1965, then-Father Costello was among a diocesan contingent in Montgomery, Ala., after the infamous Bloody Sunday, when about 150 troopers and others used clubs and tear gas against marchers supporting civil and voting rights. “I wanted to be there,” Bishop Costello told the Catholic Sun in 2015, recalling the Rev. Martin Luther King’s plea for clergy to march. He felt called to “just be a witness, a presence,” he said.

“There wasn’t a lot I could do in terms of really changing things except be one of the crowd that is urging change,” he said. Fifty years later, he reflected on the historic march. “I don’t think any one of us is going to change the world, but I think in our own personal lives we need to examine our own prejudices, and if we can’t admit that we have them, that’s the beginning of our problem,” he said. “I think all we can do is what we can do in our own little world.”

Bishop Costello’s “little world” included a long list of injustices on which he spoke publicly. He enthusiastically supported the tenets of the U.S. bishops’ pastoral letters on peace (“The Challenge of Peace: God’s Promise and Our Response,” 1983) and the economy (“Economic Justice for All,” 1986). He frequently cited the letters, mentioning concepts like “preferential option for the poor” and “just war theory.”

Bishop Costello wrote letters to the editor and participated in rallies and vigils on many issues. Over his long career, he spoke in opposition to war, the death penalty, pornography, and abortion and in support of improved race relations, gender equality, and workers’ rights. In November 1986 he met with representatives of the National Organization for Women — likely the only Catholic bishop to participate in such a meeting.

In 1984, Bishop Costello led prayer on the steps of the James M. Hanley Federal Building in Syracuse during the trial of the Plowshares 7, anti-nuclear protesters accused of trespassing on federal property. “I came to pray for peace,” he told the Syracuse Herald-Journal at the time. “I’m not about to judge what the Plowshares 7 did. That’s in their own consciences. But I am sure what they have done they have done in conscience.”

He also visited a picket line to support striking workers at the Hotel Syracuse in the late 1980s. He joined labor and religious leaders criticizing workers’ conditions at the Landis Plastics plant in Solvay in 1996.

He served on many national and local boards, including for Le Moyne College, Loretto, and Jubilee Homes of Syracuse. In the 1970s, he helped create InterFaith Works, then called the InterReligious Council of Central New York.

He served on the United States Conference of Catholic Bishops’ Social Development and World Peace committee, which shaped Church policy on issues such as economic justice, housing, welfare reform, and food and agricultural issues. He served for many years on the bishops’ Committee on Communications, including a stint as chair.

He will also be remembered for less public acts: attending funerals for relatives of brother priests, making breakfast for a disabled neighbor, counseling an interfaith couple preparing for marriage, comforting Mass-goers just hours after the terrorist attacks of Sept. 11, 2001.

He was unapologetic about his activism. “I live in the real world and I don’t think my religious faith and religious convictions are separate from the real world,” he told the Catholic Sun in 1993. He paraphrased Pope John XXIII’s (1881-1963) words: “The church’s mission is surely the salvation of souls, but also the condition of people here in this time and place.”

His outspoken — sometimes blunt — style earned both cheers and jeers. “Some people say I say too much and other people are waiting for me to speak,” he said. “I’m trying to be as honest as I can … I don’t see any point in rousing rabble to rouse rabble.”

Of his critics he once said, “I might not agree with them, but I try to listen to what they have to say. … I just do what I think is right.”

Bishop Costello was a native of Camden in Oneida County, and his family attended St. Peter Church, Rome. He was the only child of James Costello (1899-1970), a grocer, and Ethel Costello (1902-1994), an educator. His vocation “came from within him,” his mother told the Catholic Sun in 1978. He was one of 20 men ordained Syracuse Diocese priests in 1954.

Bishop Costello blamed his Irish background for his sentimentality and quick tears; he was just as likely to explode into loud, infectious laughter. Despite his apparent comfort as a public figure, he could be self-deprecating, apologetic, and self-critical.

Joyful events in his life were sometimes accompanied by dramatic, sad moments. Days before his ordination as auxiliary bishop, Msgr. Brady died. His dear friend was to have been a chaplain at the ceremony. During the happy ordination service at the Cathedral of the Immaculate Conception, a young woman was killed when a chunk of ice fell from the bell tower to the street below. He left a reception to visit the family of the woman, Mary Agnes Rogers.

He lived for decades at the rectory of St. Anthony of Padua on Syracuse’s South Side, where he quietly supported efforts to minister to black and Latino Catholics. He was the diocese’s third auxiliary bishop, and the only local auxiliary not elevated to ordinary bishop.

In 1993, some had speculated that Bishop Costello would succeed Bishop Stanislaus Joseph Brzana, who was retiring as bishop of the Ogdensburg Diocese. “I don’t know what’s in store for me,” Bishop Costello told the Catholic Sun at the time. “I’ll go where I’m asked.”

That comment echoed his promise of obedience at ordination. It also underscored the episcopal motto he chose when he became a bishop, drawn from Luke’s account of Jesus’ words at the Last Supper: I am among you “as one who serves.”

In a Catholic Sun column marking his 15th anniversary as auxiliary bishop, Costello recounted the sorrows and joys of his ministry and career serving the Diocese of Syracuse. “I have enjoyed the ‘ups’ and have survived the ‘downs,’” he wrote. “Through it all, God has been good. So for what has been, ‘thanks be to God, to God’s priests and to God’s people.’ For what yet must be, ‘Here I am, Lord.’”

Renée K. Gadoua, a freelance writer and editor, has covered Bishop Costello for more than 30 years. She previously worked as a Catholic Sun staffer and religion reporter for The Post-Standard/syracuse.com.

This story updates one that was originally published Feb. 15, 2019.