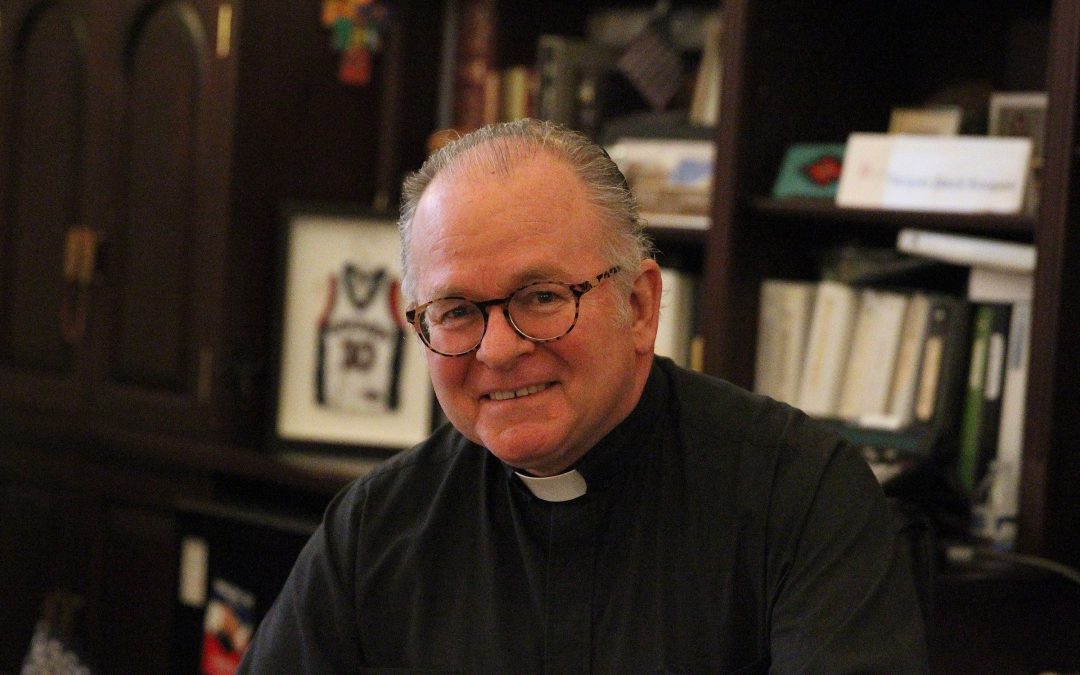 WASHINGTON (CNS) — The apparent forced resignation of the chaplain who tends to the spiritual needs of the U.S. House of Representatives and is Catholic has drawn fire against the Speaker of the House, who also is Catholic.

Earlier in April, news trickled out that Jesuit Father Patrick Conroy, a beloved figure on Capitol Hill, was set to retire in May, but various news outlets on April 26 began reporting that he was “ousted” and forced to resign by House Speaker Paul Ryan, a Republican from Wisconsin.

NBC News reported April 26 that it had obtained a letter penned by the chaplain to Speaker Ryan saying: “As you have requested, I hereby offer my resignation as the 60th Chaplain of the United States House of Representatives.”

Father Conroy’s office declined an interview request by Catholic News Service about the resignation, but in an interview published by The New York Times, he said he was asked to resign but didn’t know why and expect to leave the post he’s held since 2011 by May 24.

In a June 2017 interview with CNS, he said he had opinions about politics, like most people, but knew his job was focused on his role helping members of Congress without paying attention to political stripes.
“I can think anything I want,” he said. “But I can’t say it. Some people say, ‘You’re there, why don’t you say prophetic things?’ If I did, a week from now, there would be a different person here and nothing would have changed.”

Some speculate that the following prayer is what led to his ouster.

“May all members be mindful that the institutions and structures of our great nation guarantee the opportunities that have allowed some to achieve great success, while others continue to struggle. May their efforts these days guarantee that there are not winners and losers under new tax laws, but benefits balanced and shared by all Americans,” he prayed as lawmakers considered the tax bill in November.

Via Twitter, fellow Jesuit Father James Martin, editor at large of America, the Jesuits’ national magazine, said if that prayer is what led to the firing, “then a Catholic Speaker of the House fired a Catholic chaplain for praying for the poor.”

Sister Simone Campbell, a Sister of Social Service and executive director of Network, a Catholic social justice lobbying organization, in a message posted via Twitter, said she was “outraged.”

“From my work with Father Conroy, it was clear that his ministry is bipartisan, and he holds the needs of all — including both Republicans and Democrats — in his heart,” she said.

She said she had “serious questions” about the firing, whether it was for the prayer surrounding the tax vote or because Father Conroy had invited a Muslim cleric to pray.

Maureen Ferguson, senior policy advisor with The Catholic Association — a Washington-based group that describes itself as “dedicated to being a faithful Catholic voice in the public square” — defended Speaker Ryan and said anyone who knows him “knows he is a devoted Catholic.” She said in a statement that the criticisms surrounding Ryan’s “decision to ask the House chaplain to step aside are baseless and downright absurd. Reportedly, there were numerous complaints from members about the pastoral care offered by the chaplain, and he was asked to leave based on job performance alone. The Speaker attempted to give Father Conroy a gracious and dignified exit, but as is frequently the case in Washington, much ado is being made about nothing.”

House Democratic Caucus Chairman Joseph Crowley proposed on April 27 establishing a committee to look into the ouster, but House Republicans overwhelmingly voted to kill the resolution. Outrage, however, continued on Twitter and beyond trying to save the chaplain’s job. Father Conroy told The New York Times he wasn’t going to question the decision.

The priest was the second Catholic in history to hold the House chaplain’s spot. Father Daniel Coughlin was the first Catholic to occupy the position and was looking to retire from the post in 2010 when then-House Speaker John Boehner had been in talks with fellow Catholic and Minority Leader Nancy Pelosi about finding a Jesuit they could both support. Father Conroy was approved unanimously as the 60th chaplain of the U.S. House of Representatives May 25, 2011