Divorced and remarried are not excommunicated, pope says at audience 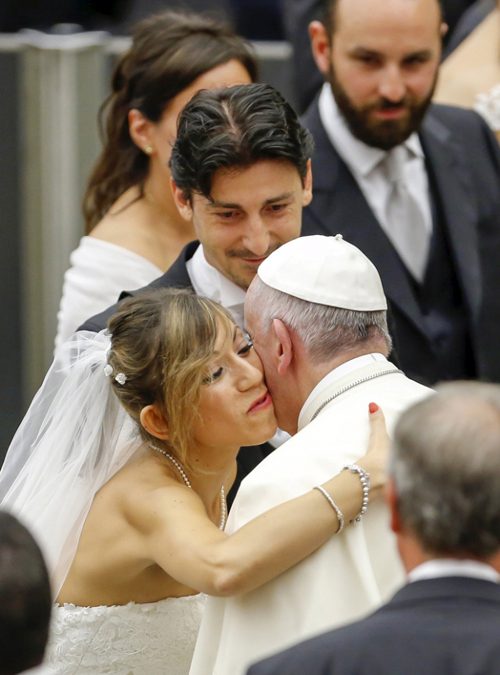 VATICAN CITY (CNS) — Catholics who have divorced and are civilly remarried “are not, in fact, excommunicated — they are not excommunicated — and they absolutely must not be treated as if they were,” Pope Francis said.
Resuming his Wednesday general audiences Aug. 5 after a month’s break, Pope Francis returned to the series of talks he has been giving on the family. It was the 100th general audience of his papacy.

At his last audience, June 24, he talked about the damage caused especially to children when couples fight and hurt each other. “Today,” he said, “I want to draw our attention to another reality: how to care for those who, after the irreversible failure of the matrimonial bond, have undertaken a new union.”

Without an annulment of the sacramental marriage, “such a situation contradicts the Christian sacrament,” which is meant to be an indissoluble bond, the pope said.

According to church teaching, in most cases such couples are not permitted to receive Communion. But bishops at the extraordinary Synod of Bishops on the family last October and preparing for the general synod Oct. 4-25 have been studying and debating possibilities for allowing some couples in some situations to return to the sacraments.

The church, Pope Francis said at the audience, must have “the heart of a mother, a heart that, animated by the Holy Spirit, always seeks the good and the salvation of persons.”

The children of such couples suffer most and deserve particular care, the pope said.

“How can we tell these parents to do everything possible to raise their children in the Christian life, giving them the example of a convinced and lived faith, if we keep them at a distance from the life of the community as if they were excommunicated?” the pope asked.

Particularly over the past few decades, he said, “the church has not been insensitive or lazy” when it comes to providing pastoral care to the divorced and civilly remarried.

In his apostolic exhortation, “Familiaris Consortio,” St. John Paul II saw an “obligation, ‘for love of the truth,’ to exercise a ‘careful discernment of situations,’” noting for example “the difference between one who has endured a separation and one who provoked it,” Pope Francis said.

As the studies and discernment continue, Pope Francis said, it is essential that Catholic pastors “openly and coherently demonstrate the willingness of the community to welcome and encourage” divorced and remarried couples and their families to participate in church life.

Prayer, listening to the word of God, attending Mass, educating their children in the faith, serving the poor and working for justice and peace should be part of their lives, he said.

Quoting his apostolic exhortation, “The Joy of the Gospel,” Pope Francis told those gathered for the audience, “The church is called to be the house of the Father, with doors always wide open … Everyone can share in some way in the life of the church; everyone can be part of the community.”