Do not let hate, violence ‘have the last word,’ says Las Vegas bishop 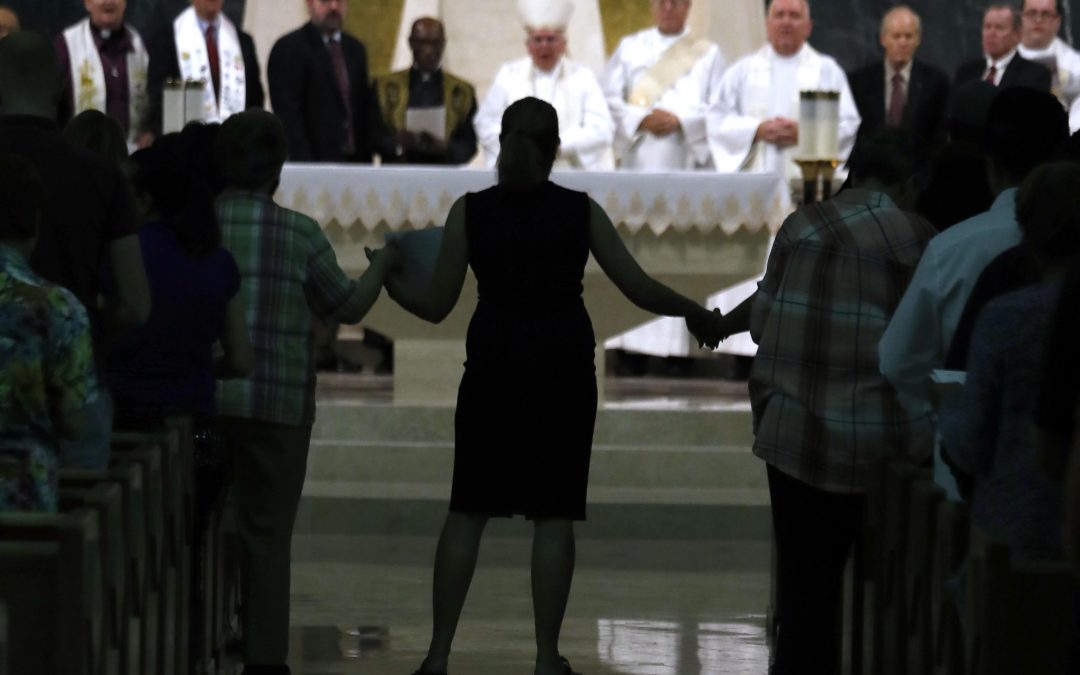 LAS VEGAS (CNS) — At an emotional interfaith prayer service at Guardian Angel Cathedral, Las Vegas Bishop Joseph A. Pepe told those filling the pews Oct. 2 that “in the face of tragedy we need each other.”

“And in the face of violence, we stand together because we cannot let hate and violence have the last word,” he said in his remarks at the evening service.

“We gather from all faiths and walks of life. We pray and sing and listen to the word of God to remind ourselves that amidst this tragedy, God is with us,” Bishop Pepe said. “God cries with our tears.”

He quoted the evening Scripture passage from Chapter 29 of the Book of Jeremiah: “’For I know the plans that I have for you,’ declares the Lord, ‘plans for well-being, and not for calamity, in order to give you a future and a hope.”

“We come together in unity across our religious traditions, across race, across gender to stand with each other as living signs of that hope,” Bishop Pepe said.

The service at the cathedral brought people together as they were still trying to fathom what had occurred barely 24 hours earlier: A crazed gunman, later identified by law enforcement officials as Stephen Craig Paddock, 64, showered a crowd of about 22,000 attending a country music festival in a venue on the Las Vegas Strip the evening of Oct. 1.

From his perch in a room high on the 32nd floor of the Mandalay Bay casino resort hotel, he fired off hundreds of rounds of bullets down on the crowd below, ultimately leaving at least 59 people dead and more than 500 injured. It is the worst mass shooting in modern U.S. history.

Once police had located the shooter, SWAT team members burst into the room to find Paddock dead from self-inflicted gun wounds.

“I am struck by the signs of goodness even in the face of violence. I think about the first responders who risked their own lives to save the lives of others,” Bishop Pepe said in his remarks at the cathedral. “I think of the emergency medical personnel and hospital staff members who answered the call for well-being and a future by using their skills to save lives. And, I am reminded that the many individuals, who rendered aid, gave rides and helped each other.

“They are living reminders of the good Samaritan and God who calls us all from fear to care,” he added.

He said the prayers that evening “for healing and unity in our community of Las Vegas,” reminded him of all the places in the world where people suffer violence every day.

“We must find ways to work together to bring about healing in our world so that none of God’s children have to suffer what we have suffered,” the bishop said.

“We stand together tonight to witness that all humans are made in the image and likeness of God, and as God’s children, they have their fundamental human dignity,” Bishop Pepe continued. “In all that we do, we need to remember that as our starting place.”

Scripture provides the summary for a religious life, he said: “Love the Lord your God with your whole heart, your whole mind and your whole soul and love your neighbor as yourself.”

“How will we do that?” Bishop Pepe asked. “It begins by gathering together in unity, prayer and love. And it continues in the actions of our everyday lives, not allowing ourselves to remain silent in the face of hate, not consenting by our apathy to the persecution of others, but working to know one another, to care for each other, and to show by our actions that we love each other.”

Among civic leaders at the cathedral service was Steve Sisolak, chairman of the Clark County Commission, who praised the police for their quick response and commended the outpouring of support from the community.

“Las Vegas will never be quite the same as a result of this,” Sisolak said. But “we’ll be back,” he added.

Sisolak started a GoFundMe online drive to raise money for the shooting victims and by midday Oct. 3, contributions had reached more than $3 million. His original goal was $500,000.

Other examples of community support included people lining up for hours to donate blood for hospitals treating the shooting victims. By the evening of Oct. 2, the blood bank capacity had been reached. Two resort hotels offered free rooms to people arriving in town to help family members affected by the shooting; Southwest Airlines was offering some free flights.

A Catholic church right next to the concert venue, the Shrine of the Most Holy Redeemer, was used “as a staging area and an initial place of refuge,” Father Bob Stoeckig, vicar general of the Diocese of Las Vegas, told Catholic News Service in an email Oct. 1. He added that “there were bullets near the doors” of the shrine, which is a popular place for tourists to attend Mass. There were no reports of damage to the shrine.

In Washington, President Donald Trump said Oct. 1 called the massacre in Las Vegas an “act of pure evil.” He mourned the victims and prayed for them and their family members, saying of those who lost loved ones, “We cannot fathom their pain, we cannot imagine their loss.”

“In times such as these, I know we are searching for some kind of meaning in the chaos, some kind of light in the darkness,” said the president, who was to visit Las Vegas Oct. 4. “The answers do not come easy. But we can take solace knowing that even the darkest space can be brightened by a single light, and even the most terrible despair can be illuminated by a single ray of hope.”

In Las Vegas, at an evening news conference with various civic leaders, Lt. Gov. Mark Hutchinson said Oct. 2 the city and the state of Nevada will get through the violence and death wrought by a crazed gunman “with faith in God and the American and Nevadan spirit we have.”