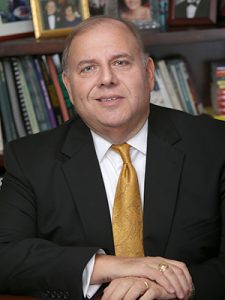 Dr. Dennis R. DePerro, 21st president of St. Bonaventure University in Allegany and former vice president for enrollment at Le Moyne College in Syracuse, died March 1 as a result of complications from COVID-19, St. Bonaventure said in a statement. He was 62.

“Words simply can’t convey the level of devastation our campus community feels right now,” said Dr. Joseph Zimmer, provost and vice president for Academic Affairs, who was named acting president late last month while Dr. DePerro was in recovery. “I know when people die it’s become cliché to say things like, ‘He was a great leader, but an even better human being,’ and yet, that’s the absolute truth with Dennis. We are heartbroken.”

Dr. DePerro was admitted to a Syracuse hospital Dec. 29 after testing positive for the coronavirus on Christmas Eve, according to St. Bonaventure’s statement, and he had been placed on a ventilator in mid-January.

“The Le Moyne College community joins with others in mourning this tremendous loss,” Le Moyne President Dr. Linda LeMura said in a statement. “Dennis worked so hard for St. Bonaventure and had accomplished so much in such a short period of time. He was beloved and touched so many lives at Le Moyne and kept in touch with many members of our campus community. He was a wonderful colleague, friend and confidant, and I will miss his one-of-a-kind sense of humor. Our prayers and sincere condolences go out to his wife Sherry, and sons Matthew and Andrew. He will be deeply missed.”

Dr. DePerro’s tenure at St. Bonaventure, a Franciscan university, began June 1, 2017. He implemented new enrollment and marketing strategies and championed new academic program development. Under his watch, the university’s online graduate initiative saw significant growth, up 329% in enrollment since fall 2017, according to the university’s statement.

Prior to his appointment at St. Bonaventure, Dr. DePerro served as vice president for enrollment management at Le Moyne College in Syracuse for 18 years before becoming the inaugural dean of the School of Graduate and Professional Studies in 2013. He also served as a professor of management in the Madden School of Business at LeMoyne. During his time as vice president for enrollment, Le Moyne’s undergraduate enrollment grew from 1,680 to 2,400, while graduate enrollment rose from 390 to 650 over the same period, the statement said.

A Buffalo native and graduate of Bishop Timon High School, Dr. DePerro spent his entire 39-year career in college administration; for eight years (1982-1990) in admissions and alumni relations at his alma mater Canisius College, and for five years (1990-1995) as dean of admission and financial aid at Marietta College in Ohio before going to Le Moyne in 1995.