End-of-life palliative care issues: The Sacrament of the Sick 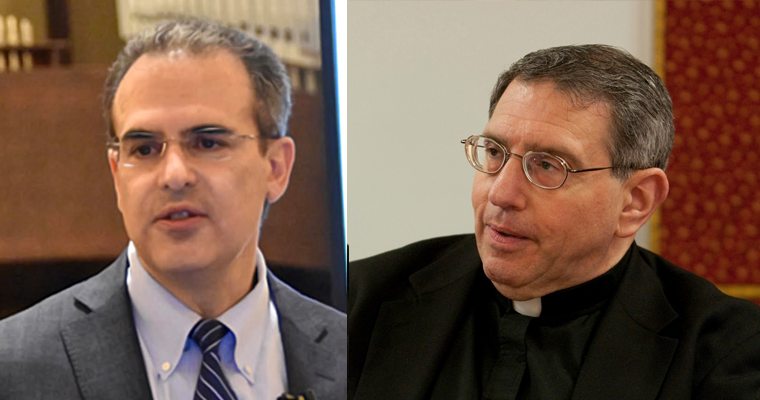 By Dr. Paul Fiacco and Father Charles Vavonese | Special to the Catholic Sun

Editor’s note: This is one in a series of articles that will explain and explore the Church’s teachings on end-of-life and palliative care issues.

Dr. Paul Fiacco is the president and medical director of CNY AIM, a St. Joseph Health clinically integrated network (CIN), and is also the medical director of the Trinity Health Integrated Care ACO as well as full-time family physician at CNY Family Care in East Syracuse. He is a parishioner at Holy Cross Church in DeWitt.

Father Charles Vavonese is a retired priest of the Diocese of Syracuse is and the author of “I Am the Resurrection and the Life,” a resource booklet dealing with end-of-life moral issues, which is no longer available. He currently serves patients receiving palliative care as the chaplain for the St. Joseph Health Mobile Integrated Services Team. In addition, he assists on weekends at Holy Cross Church in DeWitt.

The previous article illustrated the Church’s teaching that nutrition and hydration provided by natural or medically assisted means is basic human care and considered ordinary or proportionate care. This is, in principle, morally obligatory even for those in a persistent vegetative state. However, there are situations when medically assisted nutrition and/or hydration may become extraordinary or disproportionate care and may be forgone or withdrawn. These situations may occur when death is imminent; when the treatment is determined by the patient or a surrogate to be a burdensome treatment; and when offering the nutrition and hydration would be futile. St. John Paul II articulated that withdrawing or forgoing such extraordinary or disproportionate care in these cases is not suicide or murder.

The Sacrament of the Sick

The prophet Isaiah foretold that healing would be an essential part of the Messiah’s ministry. Throughout his public ministry, Jesus fulfilled this prophecy as he reached out and showed compassion for the sick and suffering by offering them healing, courage, strength, and peace. This healing ministry of Jesus is the foundation and origin of the Anointing of Sick. In Mark’s Gospel, Jesus gives his apostles the authority to heal the sick (Mk 6:7, 12-13; 16:15-18). The early Church continued this healing ministry. In the Epistle of James we read, “Is anyone among you sick? Let them call the elders of the church to pray over them and anoint them with oil in the name of the Lord and the prayer offered in faith will make the sick person well; the Lord will raise them up. If they have sinned, they will be forgiven” (Js 5:14-15).

In the early centuries after Christ, the Sacrament became an established practice and was meant to heal both spiritual and physical suffering. The early rituals included the anointing of the sick person with blessed oil and prayers offered by the elders of the church.

Between the 9th and 16th centuries the Sacrament came to be given as a preparation for death, to free the dying person from sin. The prayers of the rite emphasized forgiveness of sin and preparation for the journey to heaven. During this time, the eyes, ears, nose, mouth, hands, and feet were anointed, since any of these may have led the individual to sin.

Since the Anointing of the Sick is no longer reserved for the dying it can help bring about spiritual health in new ways, such as giving strength against despair. Since sickness can also tempt a person to give in to hopelessness, the Sacrament helps the person to remain strong in faith and in spirit. It brings inner peace by helping to relieve anger, guilt, stress, and emotional suffering that often accompany illness. The anointing also bolsters within the sick person renewed trust in God’s mercy by fostering confidence in God’s power and goodwill. Finally, participation in the anointing allows the sick to find forgiveness — from God, from others, and from ourselves. If the anointing is the final preparation for death, it should be accompanied by Communion or Viaticum and, if desired, the Sacrament of Reconciliation.

Those who may receive the Sacrament of the Sick are people who are seriously ill and in danger of death, those dealing with significant illnesses, those preparing for surgery involving anesthesia, those who are senior citizens, and those in a weakened condition, even if not seriously ill. Children who are ill, and who have reached the age of reason, can be comforted by the reception of the Sacrament. Individuals who have lost consciousness or the use of reason who would choose the Anointing if they could may be administered the Sacrament. If it is unclear whether the person is alive, the Sacrament may be given conditionally. Since Sacraments are not meant to be given to the dead, the pastoral care of the sick includes a number of prayers for the dead which include asking God’s forgiveness of sin.

The effects of the Anointing of the Sick are: the grace of the Holy Spirit is given so that the sick person may experience the remission of sins if any remain, the raising up and strengthening of his or her soul to bear the trials and hardships of sickness, and sometimes the regaining of bodily health. In the Sacrament God gives us the grace of salvation, comfort, and conciliation.

Since the Sacrament of the Sick includes an absolution of sins, the Sacrament may be administered only by a priest or a bishop. In light of recent restoration of the Sacrament it may be received when needed.

The next article will deal with the health care proxy.