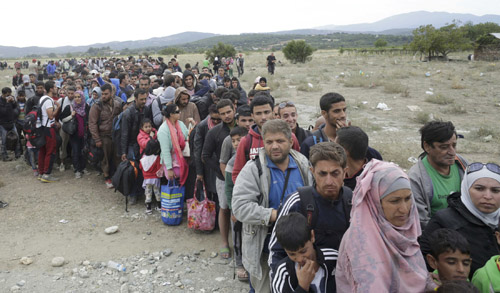 MANCHESTER, England (CNS) — The European Union must adopt a common asylum policy “without delay” because it is unacceptable for refugees to “drown and suffocate” at the fringes of the bloc, said the European bishops.

A statement issued by the Commission of the Bishops’ Conferences of the European Community, COMECE, said a common policy would prevent countries from keeping out migrants.

“If we can solve an economic crisis at an overnight EU extraordinary summit, then it should be just as easy with this crisis, especially when the fate of so many people is at stake. After all, the question of a common solution to the refugee crisis is also an issue that directly affects the values and the future of Europe,” said the statement issued Sept. 10.

It comes in response to the mass migration of refugees into Europe throughout 2015. Most of those arriving in Greece are fleeing war in Syria, while thousands of Africans have entered Italy after paying human smugglers to put them on boats from Libya.

Rather than staying in Greece or Italy, many of the new arrivals try to reach the richer states of northern Europe.

The mass movement of migrants throughout the EU revealed that the Dublin system, which requires refugees to seek asylum in the EU state in which they arrived, was a failure because several states, including Germany, Hungary and the Czech Republic, process applications of the new arrivals rather than attempting to return them to Italy or Greece, COMECE said in the statement issued a day after meeting in Munich.

The COMECE leaders also criticized EU states trying to keep out the migrants. “We cannot accept that people drown and suffocate at the borders of Europe,” the statement said. “Building barbed-wire fences and walls to prevent refugees from entering Europe is not a solution.

“Moreover, it is a Christian duty to help the refugees, whatever their origin or religion,” the bishops said.

Such states might include the United Kingdom, which has invested in security and fencing to stop migrants entering from France through the Channel Tunnel, and Hungary, which is building a fortified fence along its southern border with Serbia.

The bishops suggested that new regulations were needed to bring such countries into line with those states welcoming refugees, such as Germany, which effectively is operating an open-doors policy.

“The situation in the countries of coveted destination … shows that it is not possible to go on without a European regulation,” they said. “The fact that some countries are seeking to disengage entirely from their responsibility is unacceptable.

“After all, the European Union is founded on the solidarity of Europeans among themselves,” they continued. “The refugee problem is a common challenge and therefore requires a common European solution.”

The statement said it is “shocking that this situation also causes harassment and hostility towards refugees,” and added: “We must firmly oppose this.”

The church leaders said they welcomed attempts by the European Commission to impose mandatory quotas of refugees on member states so that burden was shared equally among them.

The plan has met with opposition from many EU countries, especially among the youngest member states in central and eastern Europe.

Pope Francis and most of the European bishops have expressed sympathy for the migrants but one Hungarian bishop, quoted in the Washington Post Sept. 7, questioned whether they could be rightly called “refugees.”

“They’re not refugees. This is an invasion,” said Bishop Laszlo Kiss-Rigo of Szeged-Csanad, Hungary. “They come here with cries of ‘Allahu Akbar’ (God is great). They want to take over.”

Migration is such a controversial issue in Britain that the ruling Conservative Party was re-elected only after promising a referendum on an EU exit to regain control of the country’s borders.

Both the UK and Hungary have bishops serving as members of COMECE.