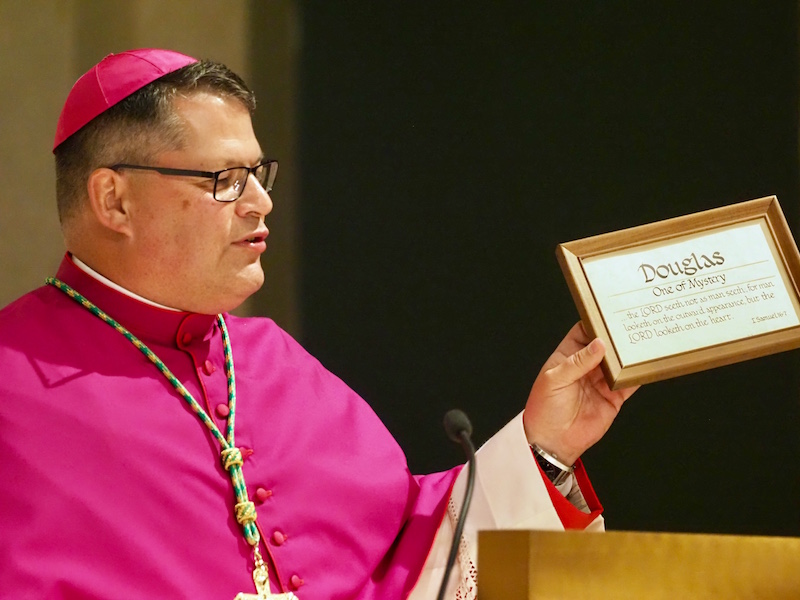 Bishop-elect Douglas J. Lucia has said the best sermon you can give is the one given with your life. As Evening Prayer was celebrated Aug. 7, the night before his ordination and installation as the eleventh bishop of the Diocese of Syracuse, his sermon asked those gathered to consider if they were indeed “a living Gospel for all people to hear.”

Faithful, family, and friends filled the pews of the Cathedral of the Immaculate Conception for the liturgy, celebrated by current Bishop Robert J. Cunningham.

The evening’s reading, 1 Peter 5:1-4, offered a meditation on the role of those entrusted as leaders of the Church: “God’s flock is in your midst; give it a shepherd’s care. Watch over it willingly as God would have you do, not under constraint; and not for shameful profit either, but generously. Be examples to the flock, not lording it over those assigned to you, so that when the chief Shepherd appears, you will win for yourselves the unfading crown of glory.”

Bishop-elect Lucia began his homily with a question: “One of the most common questions I have had in the last couple of months is, ‘How do you pronounce your last name?’” (For the record, like the island; LOO-shuh.) He also provided an answer to another common question: His ancestry is both Italian and French, with a bit of Basque.

“So, brothers and sisters, what’s in a name? It would appear quite a bit. As I was packing and unpacking, I found this plaque, which I was given many years ago, which defines the Gaelic origins of my first name, Douglas, meaning ‘one of mystery.’ I suppose that is what I am to you as I arrive on the scene to become the 11th Bishop of Syracuse — and still am even to my closest friends — one of mystery; as the dictionary says, ‘something that is difficult or impossible to understand or explain.’”

“However, in the Christian tradition, the word ‘mystery’ has a different connotation. While acknowledging it to be ‘a truth that can only be known by revelation and not fully understood,’ it signifies also the Christian sacrament. Sacrament: ‘an outward sign instituted by Christ to give grace.’ Or as I like to say, ‘a visible sign of God’s presence alive in the world today.’”

“This evening, you and I, sisters and brothers, have gathered in this Cathedral church for a vigil of prayer as we prepare for the celebration of a sacrament: that of Holy Orders,” the bishop-elect continued. “Yet this is not just a moment to pray for the one being ordained, but even more to pray for ourselves as Church — that we might become that living sign of God’s presence in this corner of the world, to pray that we let the lamp of faith shine in our lives and not let it be hidden in obscurity because of the cares of the world today seem to crowd it out or cover it up.”

“Brothers and sisters, what is your name?” he asked. “How are you known? And as Church, we ask ourselves, are we living up to the name we have been given: Christian? At this moment in our own lives, would those who are neighbor to us know that we are followers of the Way? Are you and I a living Gospel for all people to hear?”

“Now, I know you might want to say, ‘Bishop-elect Doug, you’re the one being ordained, not us!” he said. Citing the Catechism of the Catholic Church, he affirmed that all members of the Body of Christ are linked to one another. “In other words, sisters and brothers, make no mistake — you and I are in it together!”

Bishop-elect Lucia drew on the words St. Augustine wrote when he was ordained Bishop of Hippo:

“Where I’m terrified by what I am for you, I am given comfort by what I am with you. For you I am a bishop, with you, after all, I am a Christian. The first is the name of an office undertaken, the second a name of grace; that one means danger, this one salvation. Finally, as if in the open sea, I am being tossed about by the stormy activity involved in that one; but as I recall by whose blood I have been redeemed, I enter a safe harbor in the tranquil recollection of this one; and thus while toiling away at my own proper office, I take my rest in the marvelous benefit conferred on all of us in common.”

The bishop-elect closed by reminding the assembly that “in the name that gathers us together as Church we find new strength, new hope, new direction. And this is my simple prayer on this eve of Ordination: that together ‘in the name of Jesus’ (a reference to the Scripture that inspired the bishop-elect’s motto) we will come to know the One who meets us where we are at in life and invites all of us in His name to give God’s flock a shepherd’s care.”

Following the homily, Bishop-elect Lucia stood at the Cathedral’s main altar and before the assembly renewed his profession of faith, acknowledged the Church’s teaching, and promised fidelity to the Church and to the pope.

Bishop Cunningham then blessed the ring, miter, and crosier that Bishop-elect Lucia will receive at his ordination as signs of his episcopal office.

Tomorrow, nearly 1,000 people will be in attendance to witness the Ordination and Installation of Bishop-elect Douglas J. Lucia at the Cathedral. Cardinal Timothy M. Dolan, Archbishop of New York and Metropolitan of New York Province, will be the ordaining prelate; co-consecrators will be Bishop Cunningham and Bishop Terry R. LaValley of Ogdensburg. According to figures from the Diocese of Syracuse, 23 bishops will concelebrate the Mass, joined by 180 priests and 71 deacons from across the country and Canada. Nearly 700 religious, lay, and ecumenical representatives will also be in attendance.

Attendance to the Mass is by ticket only and all tickets have been distributed, however the Mass will be live-streamed at youtube.com/syrdio and broadcast live on: