Symbols of the Office of Bishop 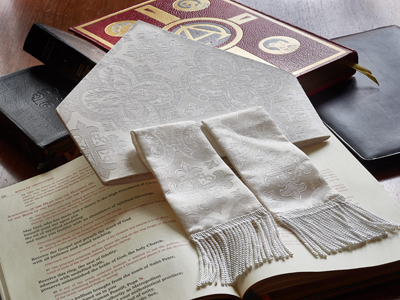 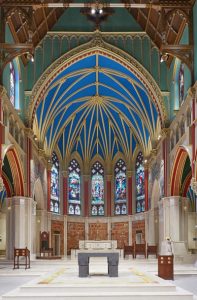 Cathedral church
In the Diocese of Syracuse, as in every diocese, there is only one cathedral. The cathedral church is the church that is the site of the bishop’s cathedra, or chair. Generally, the bishop presides at the more solemn liturgies in this church. The diocesan cathedral, in the majesty of its building, is a symbol of the spiritual temple that is built up in souls and is resplendent with the glory of divine grace.

The former St. Mary’s Church was designated the Cathedral of the Immaculate Conception in 1904. Previously, St. John the Baptist (now closed as a church but vibrant as the Samaritan Center) had served as the diocesan cathedral. The Cathedral underwent an extensive restoration beginning in February 2016 and was rededicated Sept. 7, 2017. 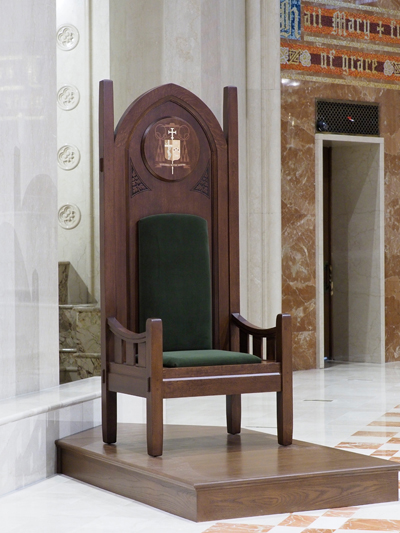 Cathedra or bishop’s chair
The bishop’s chair, or cathedra, is installed in the diocesan cathedral and placed prominently near the left side of the main altar. It represents the seat of diocesan authority that is vested in the bishop — the chief priest, teacher, and pastor, the one to whom all the people in the diocese look for guidance.

Syracuse’s cathedra is a one-of-a-kind piece constructed by the historic Manlius-based furniture maker Stickley. The cathedra and its accompanying sanctuary furnishings are the products of a creative collaboration between Stickley craftspeople, led by Engineering Manager Jim Rider Jr., and McPherson, Simmons Bros. & Sons Architectural Design Studios of New Jersey, led by Troy Joseph Simmons, whose firm provided liturgical design direction for portions of the Cathedral’s 2016-17 restoration. The cathedra is crafted from quartersawn solid white oak, stands some 7 feet tall and 3 feet wide, and weighs an estimated 250 pounds. A removable piece set into the chair’s back depicts the bishop’s coat of arms.

Miter
Originally, the miter was a simple peaked cap made of soft material that included strings on each side to fasten it to the wearer’s head. By the 10th century it took the form known to us today and its use was limited to liturgical ceremonies. The miter was first used exclusively by the pope as a mark of distinction, but by the 12th century its use was extended to all bishops as a mark of their office.

Today, bishops are invested with a miter during the ordination ceremony. It is used by popes, bishops, cardinals, and sometimes by abbots when officiating at liturgical ceremonies. 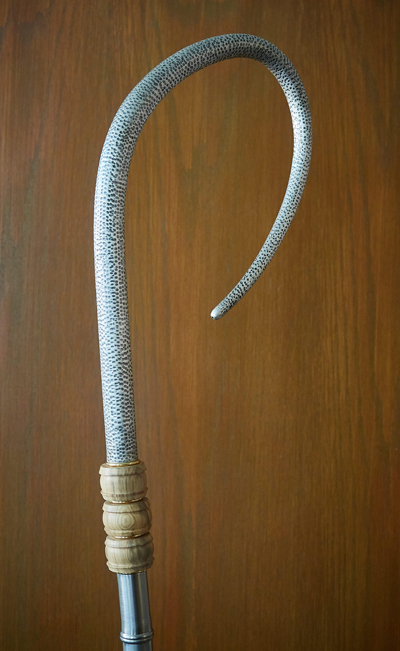 Crosier
The crosier, or pastoral staff, takes its shape from the crook used by shepherds. In the 5th century it became customary for the pope to carry a wooden staff in processions. By the 6th century all bishops acquired the custom of carrying a staff as an outward sign of their ministry as shepherds of God’s people. In later centuries, pastoral staffs were crafted from precious metals and often decorated with jewels.

Today, the bishop is presented with a crosier to be used at liturgical services. It is carried by the bishop of the diocese as a sign of his jurisdiction, that this is indeed his flock.

Bishop Lucia’s crosier is made of hammered silver and olive wood. It is a gift from the priests of the Diocese of Syracuse. 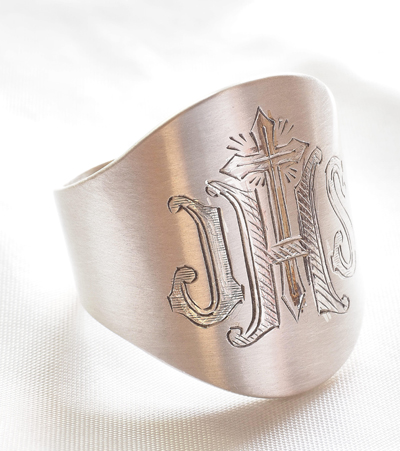 The ring is a sign of the bishop’s fidelity to and nuptial bond with the Church, his spouse. The material and style of the ring is the choice of the individual bishop. It is worn at all times.

Bishop Lucia’s ring is silver and inscribed with the letters IHS, which represent the Holy Name of Jesus. It is a gift from Bishop of Ogdensburg Terry LaValley. 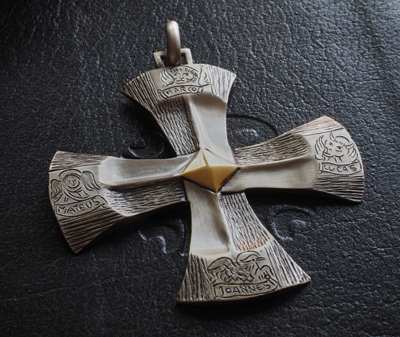 Pectoral cross
The pectoral cross is worn by the pope, cardinals, bishops, and abbots over the breast (pectus). The pectoral cross reflects the order of dignity of the office of bishop or abbot. It served originally as a reliquary of the True Cross, which encouraged the custom of wearing this cross close to the breast.

The bishop assumes the cross upon his ordination and wears this cross either suspended from a ceremonial cord at liturgical services or on a chain with his clerical suit.

Bishop Lucia’s cross is silver and features the symbols and the names of the four evangelists. It is a gift from his family. 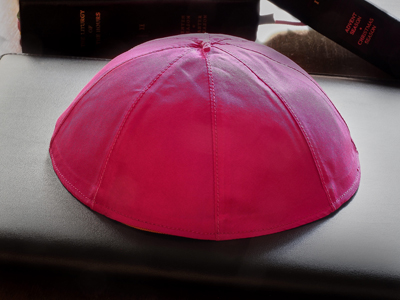 Zucchetto
The zucchetto, or skullcap as it is sometimes called, is part of the liturgical and choir dress of the pope, cardinals, bishops, abbots, and priests. It was developed to cover the tonsure, the part of the back of the head that was shaved as a man entered into the clerical state.

In recent times, although permitted to all the clergy, only the pope, cardinals, bishops, and some abbots have made use of it. It is worn during liturgical and some non-liturgical functions and it is removed during the liturgy at the Holy, Holy, Holy, so that the head might not be covered in the presence of the Blessed Sacrament.