‘Right in the flock’: Father Douglas J. Lucia, beloved priest, brother, and friend, will be a pastor to all as Bishop of Syracuse 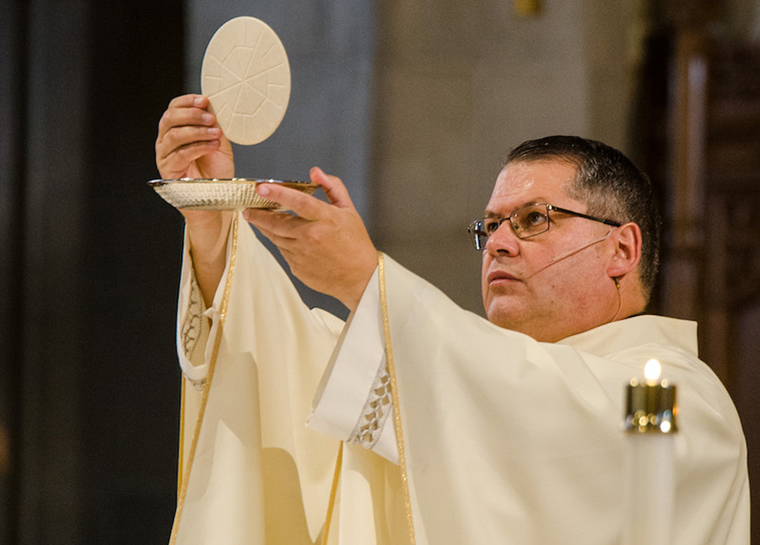 In the quiet of the week before the announcement of his appointment as the eleventh bishop of the Diocese of Syracuse, when only a handful of people knew what was to come on June 4 and he could tell no others about it, Father Douglas J. Lucia spent a lot of time in prayer.

“I was just praying over and over again, ‘Lord, what would you say?’” he recalled during an interview about a month after that announcement and about a month before his ordination and installation.

The story that kept coming to him again and again, he said, was one that had struck him during the Easter season: Acts 3:1-10. The Scripture passage tells the story of “the crippled beggar” who is healed through Jesus. The apostle Peter says to the man, “I have neither silver nor gold, but what I do have I give you: in the name of Jesus Christ the Nazorean, [rise and] walk” (Acts 3:6).

“This man is stuck and is lifted up,” the bishop-elect said. “I just thought that was such a wonderful image of what I see the ministry of the bishop as.”

Over his 30 years of priesthood in the Diocese of Ogdensburg, Bishop-elect Lucia, 56, has had a unique window into the ministry of the bishop: He served as secretary or master of ceremonies to four of Ogdensburg’s previous ordinaries and is a close friend of the current bishop, former Wadhams Hall Seminary classmate Terry LaValley.

But while he has certainly learned lessons from those bishops, it is the experience gained through his own priestly ministry that will guide Bishop-elect Lucia as he takes on his new role.

“What’s my approach as bishop? I’m a pastor. I don’t see myself any different,” he said.

That vision syncs with the counsel offered to the bishop-elect by Bishop LaValley: “His one piece of advice to me has simply [been], ‘Be yourself. Just be yourself.’”

To Bishop-elect Lucia, that means being a pastor and a servant leader. He referenced a sign that hangs in his rectory, which notes that the best sermon you can give is the one given with your life.

“To me, that’s what it’s all about. The best way I can preach God’s word is with my life. As Pope Benedict was always fond of reminding people, the Good News of Jesus Christ is not a message, it’s a person,” he said. 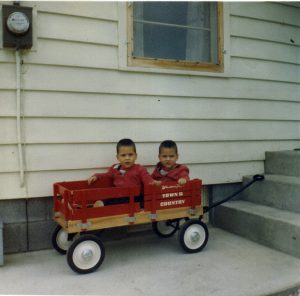 David said that as youngsters the two of them “played like normal kids; we fought like normal kids.” Both brothers swear they didn’t use their identical looks to pull pranks or get up to no good, though David confirms they share an intuitive twin connection. (One notable disconnect is their baseball allegiances: Bishop-elect Lucia is a Boston Red Sox fan; David roots for the New York Yankees.)

So David was not at all surprised when his brother Douglas pursued the priesthood.

“He said all his life that he wanted to be a priest,” David said. “He used to practice saying Mass at home,” complete with an altar and vestments made by their mother, Betty.

David is also not surprised that his brother will become a bishop — he’s been expecting it since Father Lucia was sent to study canon law at the Pontifical University at St. Thomas Aquinas in Rome.

“Here’s a kid taking his classes in Italian and Latin and he graduates with honors,” he said.

David also cites his brother’s work ethic, noting that he goes above and beyond as a priest. As a bishop, he will surely do the same.

“He will listen to the people and he will try and abide by what the people want, but he also knows that there are things that have to be done,” David said. And while his brother is hands-on when it comes to work, he’s not a micromanager. “But he’s still going to be there to oversee and make sure everything’s being done the way it’s supposed to be done.”

And then there’s his brother’s pastoral side. As a longtime volunteer firefighter and EMT, David has “run into him [his brother] in different situations…. I’ll say, he’s good at what he does.” 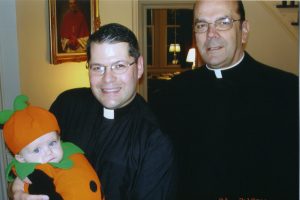 Deb and Matt Gainey have known Bishop-elect Lucia for some 20 years and it shows — over lunch at a local restaurant the three laughed and joked and shared memories in the kind of shorthand that only the closest of friends enjoy. They often cook dinners together on the weekends and, the week before his installation and ordination, the Gaineys would even help the bishop-elect move into his new residence in Syracuse.

The bishop-elect has been there to support his friends as well. When Deb was pregnant with the Gaineys’ oldest child, Emma, who is now 15, Deb was hospitalized due to serious complications. The couple had gone through some pretty rough miscarriages, Deb recalled, and she spent 23 days in the hospital before Emma came into the world.

“This young priest would come in to bring Communion and then he would sit down to talk with me. He really helped me feel less lonely while my husband was at work during the day,” Deb said.

Father Lucia would stick around and chat — and not just in English. Deb is a French teacher and the bishop-elect speaks French and Italian (and also knows Spanish and Latin), so the two would converse en français.

And over the years, as the Gaineys’ three children were born, Bishop-elect Lucia was the first to meet and bless them. To Emma and Matthew, who is 12, Bishop-elect Lucia is an inspiration as well as a trusted friend they can turn to. To seven-year-old Joey, the youngest of the Gainey children, the bishop-elect has always been, and likely always will be, “Doug-Doug.”

Bishop-elect Lucia also served as the pastor of the Gaineys’ parish, St. Mary’s in Canton. The couple are youth ministry leaders in the parish and were recently commissioned as Lay Ministers in the Diocese of Ogdensburg. Throughout the many years and roles, the bishop-elect’s pastoral ways have always seemed easy.

“He’s a natural, in terms of being a priest,” Deb said. “It seems like it just comes as second nature. He is selfless, generous, and is truly humble. The pastoral care he has given our family over the years has been a tremendous blessing to each of us. We are honored and feel such gratitude to God to have Bishop-elect Lucia in our lives. Not only is he a close friend, but he is family.”

Pastor to all people

Marika Donders has come to know the bishop-elect as both a colleague and her pastor. She is the Diocese of Ogdensburg’s Director for the Office of the New Evangelization and a parishioner of St. Mary’s Church in Waddington, one of two small parishes where Bishop-elect Lucia has served as pastor since 2017.

Donders can quickly point to what makes the bishop-elect so good at all of his many roles.

“He listens,” she said. At work, he listens to everyone and considers various points of view in addition to his own, she explained. He is also “very practical, very down to earth” and realistic about how to move initiatives forward.

In the parish, “his homilies are just fantastic, and he’s a great confessor…. Again it’s that listening… listening and reading between the lines. He’s a pastor in every sense of the word, meeting people where they’re at. And meeting anybody, really…. That’s who he is.”

Donders can recall the first time she went to Father Lucia to receive the Sacrament of Confession. “He actually thanked me for entrusting him. That sense of, ‘thank you for trusting me with this,’” she recalled. “He wants to be given the opportunity to be a pastor.”

Bishop-elect Lucia is both pastor and vocations director to Tyler Fitzgerald, a second-year college seminarian for the Diocese of Ogdensburg and a parishioner of St. John the Baptist in Madrid.

Bishop-elect Lucia is “chipper, cheery, just a fun guy to be around” as well as a very good preacher, Fitzgerald said, but what he’ll miss most about his pastor is “his eagerness to serve the people. People feel comfortable around him…. He really does live out the Christian life.”

Fitzgerald has seen the bishop-elect bring a vibrant, engaging spirit to the small parish, opening a spot on the parish council for a youth member and reestablishing Eucharistic Adoration. He also “has a way to comfort people through the sacraments,” Fitzgerald said.

“He has the best interests of the people and God and the Church in his mind,” Fitzgerald said.

“I think he’ll be an excellent bishop. He loves shepherding. He gets right in the flock.”

In the name of Jesus

And that love of the flock is only natural, since young Douglas Lucia was right among the flock when he knew for sure he was called to the priesthood.

In January 1987 he was a seminarian working in a soup kitchen, part of a three-week service program in the center of Buffalo.

“I had really been going through some discernment trying to figure out where I wanted to be in life,” he remembered.

By his last day in the program, he had decided the priesthood was not how he was meant to serve the Church, that he would leave seminary and pursue a family and a career in law.

“I was doing the dishes… the sister who ran the soup kitchen said, ‘Doug, you gotta get out and wait on tables.’” He didn’t really feel like it, but followed orders.

The meal that day was a bowl of soup and a sandwich. He approached a guest — “he looked like Santa Claus” — with the meal.

“I remember just putting down the sandwich and the bowl of soup in front of him and I just heard as loud as day: ‘the Body of Christ. Amen.’”

“I still remember that moment. At that moment, I knew exactly what God wanted.” He knew it meant the wife, the kids, the career, the house and dog he had imagined were not to be, “but at that moment there was such peace. And I really knew what God was asking.”

“It was that soup kitchen. I wasn’t in church, I wasn’t on my knees. It came just as I was there among the people.”

Bishop-elect Lucia’s memory of that experience remains as clear as the day it happened. It has and will continue to shape his ministry as a shepherd of God’s people.

“When the nuncio asked me [to serve as the Bishop of Syracuse], of course I was totally flabbergasted, totally shocked, but I think in the back of my mind was that soup kitchen. I realized, well, if He asked me one time, He can ask me again!”

So when Bishop Lucia joins the Order of Bishops as a successor of the Apostles Aug. 8, it is doubly fitting that he will take Peter’s words as his motto and guiding principle: In the Name of Jesus.