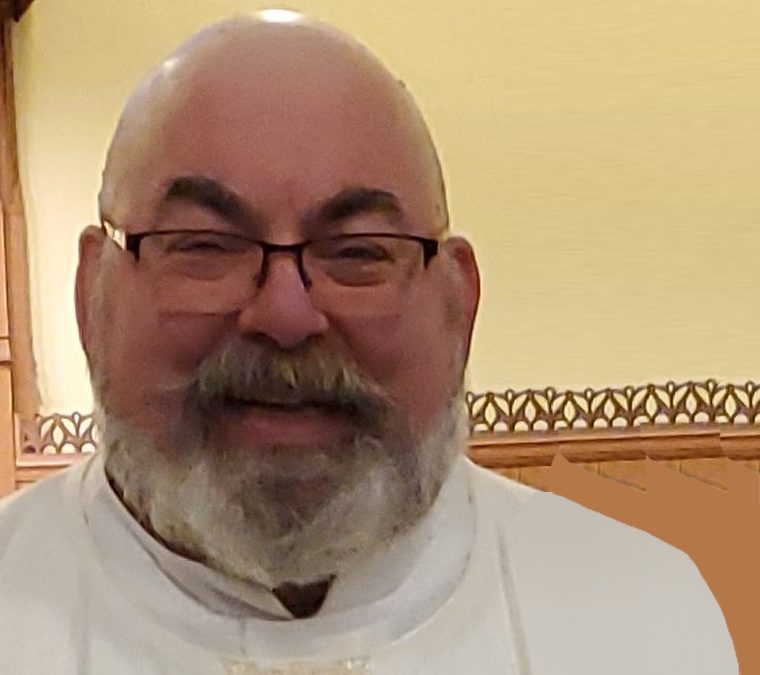 Father Gaetano “Guy” T. Baccaro lived a life defined by hope, recalled clergy who served with him in the Diocese of Syracuse.

Father Baccaro, 69, who had multiple illnesses for quite a while, died Aug. 21 at Millard Fillmore Suburban Hospital in Williamsville, Erie County. Born on Nov. 23, 1951, he was ordained on June 8, 1985. At the time of his death he was ministering at Our Lady of Perpetual Help in Minetto and Our Lady of the Rosary in Hannibal. He was able to perform his duties as a priest up until about the last month, said Father John W. Canorro.

At the end of his life, Father Baccaro chose not to retire, but to be as active as possible, Bishop Lucia told about 200 mourners, including about 25 priests and deacons. The main concelebrants were Bishop Emeritus Robert J. Cunningham, Father Canorro and Father John J. Smegelsky.

Bishop Lucia remembered entering Christ the King Seminary in East Aurora just as Father Baccaro was leaving to be ordained. Father Baccaro entered the priesthood four years before the bishop. Throughout their ministries, their paths continued to cross.

Father Baccaro also ministered in Syracuse, Rome (assistant at St. Peter’s and chaplain at Rome Catholic High School), Liverpool and Oswego. He wanted to help people get closer to God, said Father Canorro, who gave the homily. Father Philip A. Hearn had expected to speak, but he could not because of illness, Father Canorro said.

Father Baccaro appreciated the hope that is at the center of the Christmas story, and he strived to bring people together to remember that God loves us, Father Canorro said.

“That hope—that was the hallmark of his ministry,” the priest remembered. “At Christmas there just seems to be a little more hope, a little more compassion in the world.”

Father Canorro continued: “Our brother will rise, our sisters will rise, on the resurrection at the last day. This is not the end.”

Those who knew Father Baccaro will miss him. “We will miss seeing him when he was out to eat—he loved to eat. We will miss listening to his little stories of things that had happened,” Father Canorro said.

“We all have that hope to share, that hope of the resurrection,” Father Canorro said. “As we go forth from this place, we share that hope with our brothers and sisters. We will find eternal peace with God’s people in heaven.”

Father John D. Manno spoke to Father Baccaro about two weeks before he died: “He said to me, he was so thankful to be serving at Our Lady of Perpetual Help in Minetto and Our Lady of the Rosary in Hannibal. So he was very thankful for that. And then he was grateful for all the help and support that he got from Father Smegelsky and Father Canorro and Father John Leo Oduor.”

Father Baccaro ministered for 36 years, “and you don’t do something for that long unless you care about it or want to do it,” said his sister, Anna Marie Vaughan of Morrisville.

After his years at St. Bonaventure University, she said, her brother became a schoolteacher for a time. She is not sure what changed his mind, but he next entered the seminary—“he just knew that’s what was gonna make him happy so that’s what he did.”

Asked about his personality, she said, “He said what he thought and he meant what he said. And he was honest, but in a kind way. … And if he thought he was right, then he was right, and that was all there was to it,” she added with a laugh. “So we had some good discussions and good arguments but it was all good. We never got mad. … We teased each other a lot …, but it was all good. …

“He had a very boisterous laugh and people could hear him for quite a way. Ask anybody that knew him—you knew when he was in the room; if he was laughing, you knew where he was.”

“And he loved his dogs,” Anna Marie’s husband, John Vaughan, said. Father Baccaro’s most recent dog, Beau, is a “Doodle,” a mix of a Golden Retriever and a poodle.

Father Baccaro also liked to travel and to cook. “My grandmother basically took care of us,” Anna Marie said, “and she was the cook in the house and she taught us a lot.”

“He was known for his soups,” Father Canorro said, “and so he would never put salt in his soups” out of consideration for those who can’t have it. “He liked to cook other things, but the soup thing always sticks out in my mind,” added Father Canorro, who said with a laugh that he always added his own salt.

George and Paula Ranous, former parishioners of St. Paul’s in Oswego and current parishioners of Our Lady of the Rosary, shared in an email that Father Baccaro was a wonderful friend and a caring, compassionate pastor. They said he played the piano and enjoyed Broadway musicals but classical music was his favorite.

“He was such a good friend that he taught us to relate to the Lord Jesus as friend,” they said. “Father had a great love and appreciation for the sacrament of reconciliation. He never wanted anyone to be afraid of going to confession. He took delight in children’s First Confessions, being warm, friendly and approachable so they would enjoy the experience of God’s mercy and want to receive the sacrament.”

Paula said: “He laughed in the confessional and it helped make you realize that God’s love for you mattered far more than how you had messed up. He was a compassionate confessor.”

“Father Guy had a deep love and reverence for the Eucharist,” Paula added. “Parishioners often saw him praying the rosary before morning Mass. During his illness, he always had his rosary.”

The Ranous’ son, Chris, of Chicago, shared that Father Baccaro’s homilies “were special. The way he gave a homily was like having a conversation, so direct and personal. It was almost like he was coming up with thoughts right there and was surprised and delighted by them. This made the meaning very easy to understand and relatable to my own life.”

Marie Schadt, Oswego County legislator and small-business owner, said in an email, “Father Baccaro was fantastic. He was the most nonjudgmental, open-minded priest I have ever met. An animal lover as well as a people lover. I will miss him forever.”

Barb Hanley, historian for St. Paul’s and currently a parishioner of CGS, wrote that Father Baccaro had a love for history and appreciated the people’s dedication to St. Paul’s. She added that when her husband passed away, Father Baccaro was at his camp. As soon as he got the call, he came immediately to her home to comfort her and her family: “My kids fell in love with him that day.”

Bonnie Perfetti, of Oswego, was part of the group that traveled to Alaska with Father Baccaro in 2013. She remembers that “very quickly the group started calling Father their good-luck charm. Only 30% of those who travel to Denali get to see the mountain because it is so often covered by clouds. The day we were in there, Denali was completely cloud free, all day.”