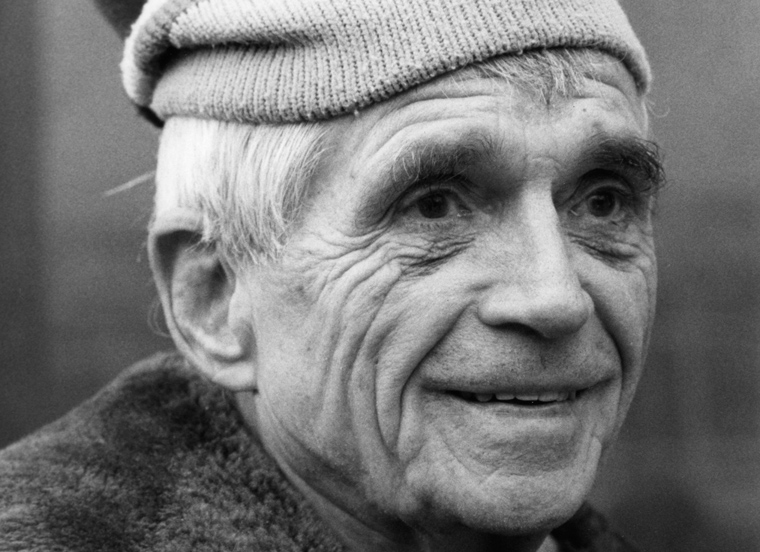 Father Daniel Berrigan, the anti-war Jesuit priest who grew up in Syracuse, is being remembered as a poet and prophet who challenged the Catholic Church and the country to follow the Gospel’s call for peace and justice. The last of the activist Berrigan Brothers, he died April 30 at Murray-Weigel Hall, a Jesuit health care community in New York City. He was just nine days short of his 95th birthday. Berrigan’s death came on the anniversary of the end of the Vietnam War, which radicalized the priest and propelled him to the center of the anti-war movement, on to national magazine covers, and to federal prison for trespassing and damaging government property in his opposition to war.

In a 2009 interview with the Jesuit magazine America, Berrigan suggested an inscription for his gravestone: “It was never dull. Alleluia.”

Dull it wasn’t. Berrigan was born on May 9, 1921, in Virginia, Minn., the fifth of six brothers. He grew up on a farm near Syracuse, where he attended the former St. John the Baptist Academy. He joined the Society of Jesus, the Jesuits, when he was 18. He was ordained a priest in 1952.

He “fell in love immediately and incurably with the Jesuit style,” he wrote in 1968. “It appealed to me immediately as a ground for my boundless idealism, and I found in the talents and youth and drive around me a constant spur to make my own life count.”

He authored more than 50 books and was as renowned in some circles for his literary life as for his activism. In 1957, the year he started a six-year teaching stint at Le Moyne College, he won the prestigious Lamont Prize for his first poetry collection, Time Without Number. The collection was a National Book Award finalist in 1958.

Among Berrigan’s many acquaintances was Thích Nhất Hạnh, the Vietnamese Buddhist monk and peace activist with whom he met in France in the 1970s. He traveled with the historian and activist Howard Zinn to North Vietnam in 1968, returning with three released American prisoners of war.

“Dorothy Day taught me more than all the theologians,” Berrigan said in an interview with The Nation magazine in 2008. “She awakened me to connections I had not thought of or been instructed in, the equation of human misery and poverty with warmaking. She had a basic hope that God created the world with enough for everyone, but there was not enough for everyone and warmaking.”

Berrigan also appeared on the pop culture scene. An illustration of him and his brother Philip, then a Josephite priest, was on Time magazine’s January 25, 1971, cover. In the story, titled “Rebel Priests: The Curious Case of the Berrigans,” Berrigan asked: “But how shall we educate men to goodness, to a sense of one another, to a love of the truth? And more urgently, how shall we do this in a bad time?”

He has come to be associated with “the radical priest” Paul Simon refers to in his 1972 song “Me and Julio Down by the Schoolyard.” He also had a cameo in and was a consultant on the 1986 film “The Mission,” about Jesuit missionaries in South America and their opposition to slavery.

The once-fiery activist, teacher, and poet attended the July 29 funeral of his brother, Jerry, at St. Lucy’s Church in Syracuse. He did not speak during the Mass, but sat in a wheelchair next to his brother’s casket. (Philip Berrigan died in 2002 at age 79.)

The final verse of Daniel’s poem “Some” was printed on Jerry’s funeral card. The verse uses an unmistakably Catholic metaphor: “(I walk) because the cause is the heart’s beat, and the children born, and the risen bread.”

Berrigan “was in a lot of ways the conscience of the church in Central New York,” Auxiliary Bishop Thomas J. Costello said May 1. “His leadership in the civil rights movement and his anti-war efforts on Vietnam were heroic.”

A pivotal incident in Berrigan’s life came in May 1968. He, Philip, and seven other Catholics used homemade napalm to burn draft files in Catonsville, Md. Both Berrigans were sentenced to three years in prison. Daniel went underground for about four months, until the FBI found and arrested him.

Berrigan memorialized the trial as a play based on court transcripts.

“Our apologies, good friends, for the fracture of good order, the burning of paper instead of children,” he said in a statement read at the trial. “We say: killing is disorder, life and gentleness and community and unselfishness is the only order we recognize. For the sake of that order, we risk our liberty, our good name.”

Berrigan made some people uncomfortable with his public actions, which raised debate about the appropriate role of Catholics — and clergy — in opposing war, racism, and injustice.

“More traditional people were probably offended by what Dan was saying, and more progressive people were applauding him,” Costello said.

When Berrigan left Le Moyne in 1963, not all the faculty and administration were sad to see him go, according to Father Bill Bosch, a Jesuit and retired history professor who now oversees the college’s archives. “He was a maverick and perhaps not as docile and obedient as they hoped,” Bosch said.

In the 1980s, the Berrigans turned their attention to opposing nuclear weapons. In 1980, the priest brothers and six others trespassed onto the General Electric nuclear missile facility in King of Prussia, Pa., where they damaged a nuclear warhead and poured blood on documents. The civil disobedience, for which the participants were charged, convicted, and served federal prison time, began the Plowshares Movement.

“Plowshares” refers to the Old Testament verse in the Book of Isaiah, who said that “they shall beat their swords into plowshares.” Since 1980, more than 100 plowshares anti-nuclear demonstrations have taken place.

Berrigan maintained his opposition to war by criticizing American intervention in Central America, the Gulf War in 1991, the Kosovo War, the U.S. invasion of Afghanistan, and the 2003 invasion of Iraq.

He also was an outspoken opponent of abortion and capital punishment, embracing the “consistent ethic of life.” The term, coined by the late Cardinal Joseph Bernardin, refers to the belief that all human life is sacred and should be protected.

Christians should have no part in “abortion, war, paying taxes for war, [or] disposing of people on death row or warehousing the aged,” Berrigan said in 1984.

“It was his vision of what a Christian community was and could do,” said Father Bosch, who served as International House adviser from 1966 to 1996. Although Berrigan only led the organization about six months and wasn’t often on campus in recent decades, “mythology” about his role still appeals to some students, Bosch said.

“Because of the things he said, he would have been a noted leader, but being a priest and a Jesuit added fire on both sides,” Bosch said. “He was a person bigger than life.”

Mike Pasquale, a 1990 Le Moyne graduate and an International House president, said Berrigan’s life story influenced his own. Pasquale worked for many years at Catholic Charities’ former Brighton Family Center and now works at the Center for Community Alternatives in Syracuse. There he helps people with criminal histories re-enter the workforce.

“It takes a great deal of fortitude and faith to keep moving even though things don’t seem to get better,” he said of Berrigan. “You can swap out today’s wars for Vietnam, and what he said is still relevant.”

Brigid Farrell Dunn, a 1985 Le Moyne graduate, recalled that her family considered Berrigan “something of a criminal.”

Dunn, too, credits Berrigan with inspiring her to join the Jesuit Volunteer Corps after graduation. She later earned a master of divinity and is now a chaplain at St. Joseph’s Hospital Health Center in Syracuse.

“I could never live up to his life of total integrity,” she said. “What I really loved about Dan is he remained in the Jesuits, even when he was getting pushback,” she said. “That was his vow and his conscience.”

When Dunn was a graduate student at Yale, Berrigan visited New Haven for a poetry reading. She brought her copy of Berrigan’s autobiography, To Dwell in Peace. He signed it “Brigid — in grateful friendship. Daniel Berrigan.” For that memento, and the example he set, Dunn is very grateful.

Renée K. Gadoua is a freelance writer and editor who lives in Manlius. She is a graduate of Le Moyne College, where she served as International House president her senior year. Follow her on Twitter
@ReneeKGadoua.

See photos of Father Berrigan below.

Jesuit Father Daniel Berrigan is pictured in 2011. (Photo by and courtesy of Jim Forest)