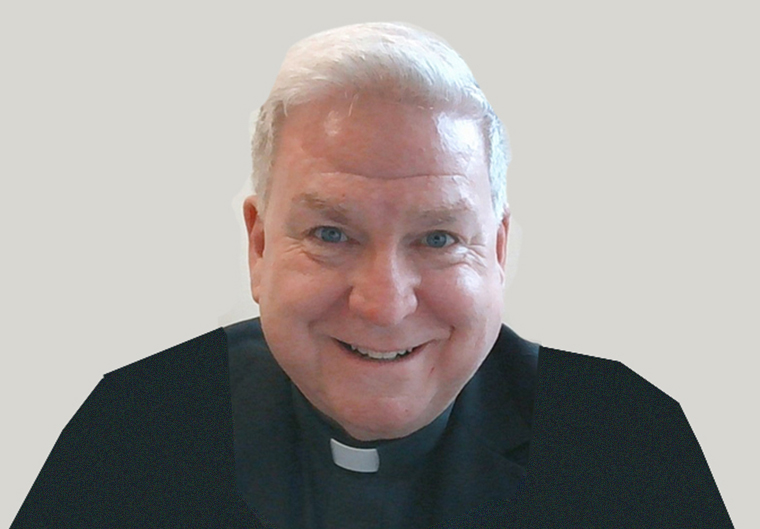 Father John P. Donovan, JCL, of the Diocese of Syracuse had heard from five continents in the first week since being elected president of the Board of Governors of the Canon Law Society of America (CLSA), which has 920 members in over 40 countries. It is the largest English-speaking canon-law society.

Father Donovan noted that his election to the one-year term was announced at 12:18 p.m. Oct. 12, although he laughed and said he remembered the precise time because he was nervous. The CLSA held its 84th annual convention two weeks ago in Cleveland.

The society says it cooperates in the “continuous revision and renewal of the universal law of the Church and with the United States Conference of Catholic Bishops in proposing new legislation, resolving current legal questions and implementing laws and structures which pertain to the vital life of the Church.”

He earned his BA from Le Moyne College, his M.Div., STB from St. Mary’s Seminary & University in Baltimore and his JCL from The Catholic University of America in Washington, D.C. Would he have gone to law school if he had never been ordained a priest? He answered, “There was a serious consideration.” He said lawyers must be able to think in the abstract and be able to think and argue systematically.

Ordained in 1986, Father Donovan is the pastor of Sacred Heart Church in Cicero and also the diocesan Vicar for Canonical Services and the Adjutant Judicial Vicar. He has also ministered in Utica, Endicott, Morrisville-Munnsville, Johnson City, Binghamton and Vestal.

“I’m responsible for a certain percentage of my time in the office and doing the canon-law work,” he said. “The bulk of my time is allotted to my parish.”

He explained a canon lawyer must be “able to listen with a different ear given the time and the place. And so even like a pastoral council meeting, when something’s being brought up, I’ll say, Well, no, it’s not really the process for that. Let me explain that process. This is what we do next, that type of thing. So I have both roles. I can listen with both ears, I can focus in on one area more than another. … I was ordained a parish priest. I wasn’t ordained a canon lawyer.

Canon law requires precision. Father Donovan cited the canon-law case of an Arizona priest who performed baptisms for years using the word “We” instead of “I.” That invalidated the baptisms, according to a report from Catholic News Service.

Precise adherence to forms applies to Father Donovan’s duties as well. He said that if the bishop is realigning or reassociating parishes with one another, he must follow certain procedures; Father Donovan double-checks to make sure they were followed. The same applies, for example, in the transfer or upgrades of properties.

In his role as Adjutant Judicial Vicar, Father Donovan generally serves as a judge; he was in the middle of two trials last week, including a contentious marriage case. Canon law trials in the diocese normally have three judges who do the interviewing, and they serve as the jury.

In his CLSA presidency, Father Donovan will go to the Vatican this year to meet with the prefects of the different dicasteries to discuss issues that need to be addressed in certain areas of the law. The English-speaking canon-law societies work with one another to approach questions to Rome “when it comes to questions that we don’t have clear answers on,” he explained. In May, he will be going to the convention of the Canon Law Society of Great Britain & Ireland.

Asked if he ever finds time for a hobby, Father Donovan said: “I’m a big Bills fan. The Yankees start shortly.”

The Yankees were eliminated. Father Donovan’s presidency is just beginning.