Carrying the light of Christ, September 10: Father Mark Pasik recalled as an ‘oasis in the desert’ 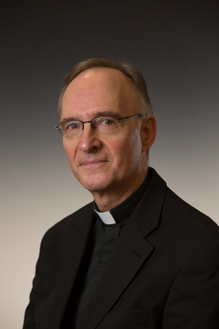 One day while shopping in a shoe store, Father Mark Pasik and the salesman struck up a conversation. The salesman told Father Pasik he was Catholic, but hadn’t been to Confession in years. Father Pasik offered to hear the man’s confession in the store’s back room. While Father Pasik’s nephew minded the store, “Father Mark absolved that man of sin and brought him back to Jesus Christ,” said his dear friend Rev. Canon John Mikalajunas.

Father Pasik, a priest of the Diocese of Syracuse for more than 40 years and pastor of St. Mark’s Church in Utica since 2008, died Aug. 30 after a battle with cancer, according to diocesan officials. He was 70 years old.

Rev. Canon Mikalajunas offered a homily reflecting on and celebrating the ministry of his best friend and brother priest. “I would like to begin with these simple words,” he said, echoing those of his friend. “‘Good morning. My name is Father Mark Pasik, and I am the pastor of St. Mark’s. Mark my words.’”

Born on Flag Day, June 14, 1950, Father Pasik was “a devoted patriot” who flew the American flag outside his rectories and even set up “an unofficial mini ‘post office’ at the rectory, ensuring a small flag was positioned on the wall by the outgoing mail folder,” according to a remembrance in the St. Mark’s bulletin.

A graduate of Utica Free Academy, Father Pasik studied at St. Mary’s College and Ss. Cyril & Methodius Seminary in Michigan, also studying at Utica College during his summer breaks from St. Mary’s. He later earned a master’s degree in theology from the University of Detroit and studied canon law at The Catholic University of America.

Father Pasik was ordained May 8, 1976, going on to serve as associate pastor of Sacred Heart in Utica, St. Peter in Utica, and St. Paul in Norwich, and as pastor of St. Casimir in Endicott, Transfiguration in Rome, and St. Mark in Utica. Father Pasik also served on the diocesan priest personnel committee, tribunal, senate, vocation committee, and diocesan school board.

“All the things that he did and all the lives that he touched — it was because of the strength of being a priest forever,” Rev. Canon Mikalajunas said, referring to the words engraved on the bottom of Father Pasik’s chalice at his ordination.

He closed his homily by singing a prayer for his friend: “Lord Jesus of Compassion, grant him rest eternal.”

In his remarks at the close of Mass, Bishop Lucia noted that when he first came to the Diocese of Syracuse, he spoke with Father Pasik by phone “because by that point he had already begun his journey with this illness. But… I was always struck by his faith. I always found it very consoling to talk to Mark. I often thought that if things had been different, I think I would have been turning to Mark as a confessor and a spiritual director.”

He quoted from notes included in Father Pasik’s personnel file: “good role model and mentor”; “leadership is evident, along with inspiration and spiritual guidance”; “oasis in the desert”; and from a 2016 letter from Bishop Cunningham, “Your love of and concern for the faith community is well-known and valued.”

“Mark,” Bishop Lucia said, “I don’t think any other compliments could be bigger than these, except the words of our Lord: Well done, good and faithful servant. Come, share your master’s joy.”

Father Pasik was predeceased by his parents, Joseph and Frances (nee Baszczowski) Pasik; brother Donald (Gloria); and sister Bernadette. He is survived by many nieces, nephews, grandnieces, and grandnephews.

Donations in Father Pasik’s memory may be made to St. Mark’s Church or Hospice.