Father Matthew Lyons ordained as ‘one who serves’ 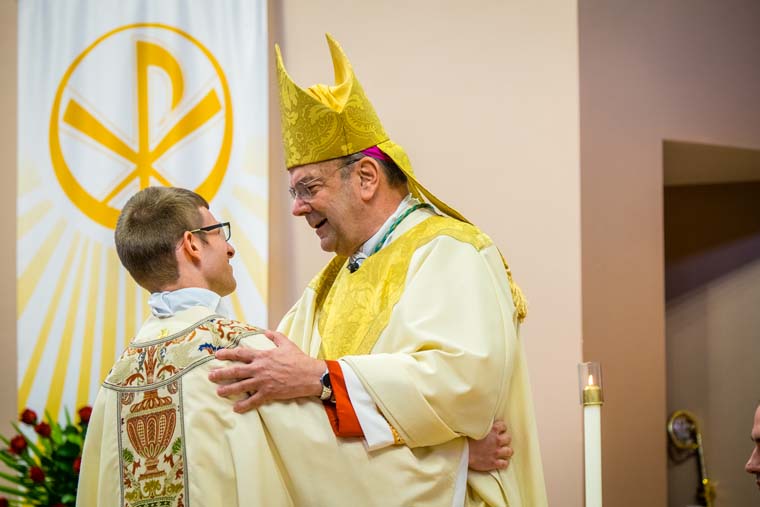 The diocese’s newest priest drew on the words of a giant of the faith as he reflected on his ordination:

“All I can think of is St. Paul saying, ‘It’s no longer I who live, but Christ who lives in me,’” said Father Matthew Lyons, just minutes after the liturgy celebrating his ordination ended.

With the Cathedral of the Immaculate Conception unavailable due to ongoing restoration, it was fitting for Father Lyons to be ordained at Holy Cross. 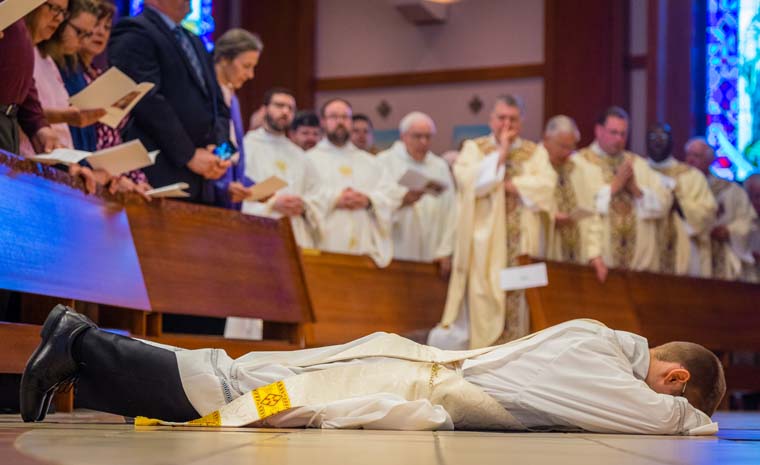 “It comes full circle,” he said during an interview with the Sun two days before his ordination.

Father Lyons spent his pastoral year ministering at the parish, and he spent last summer there as well, ministering as a deacon. “I’m finishing up where I spent so much of my formation and grew a lot,” he said.

Father Lyons’ journey to the priesthood began long before his time at Holy Cross, however. As a child growing up in Endicott, his family attended St. Joseph’s Church. His father would also bring him to the early morning Mass at nearby St. Casimir’s Church. Seeing the priests who served in the parishes — Father Mark Pasik, Father James Serowik, Father Charles Opondo-Owora — living out their priesthoods had an impact on him.

Father Lyons first thought about the priesthood when he was five, he recalled. “Just going there [to Mass] each week and having people ask you, as a little kid, ‘What do you want to do when you grow up?’ That thought hit me there.”

The thought grew strong after his Confirmation in tenth grade. “You can see grace at work,” Father Lyons said. He started reading a lot about the Catholic Church and praying more seriously. Still, “I was thinking about it, just resisting it,” he said.

After high school, he spent a year at the University of Scranton before transferring to Binghamton University, where he studied finance. In his junior year there, he found himself at a fork in the road, he remembered. Did he want a job in finance or to enter the seminary?

He spent a lot of time in prayer. “That’s where I heard the voice of God,” Father Lyons said.

He also went to confession and Mass at St. Ambrose Church in Endicott before morning classes. In the confessional, the late Father Charles Currie would always ask, “Is there anything else bothering you?” Father Lyons remembered. “I said, ‘Well, I’m thinking about being a priest,’” he recalled with a laugh. Father Currie was quick to set up a time to talk, “the first of many conversations,” Father Lyons said.

He reached out to Director of Vocation Promotion Father Joseph O’Connor as well, and introduced himself to Father Opondo-Owora, who had recently been assigned to St. Joseph’s. During his senior year, Father Lyons joined a discernment group run by Father O’Connor and ultimately applied to and entered the seminary.

His seven years of formation have included studying philosophy and theology at Theological College at the Catholic University of America in Washington, DC, as well as time as a religious education and RCIA teacher, in hospital ministry, and in pastoral service in parishes around the diocese.

Ordination day was blessed with sunny skies and breezes carrying the sounds of Holy Cross’ choir and musicians as Mass began.

The Rite of Ordination began as Deacon Matthew Rawson, ordained to the transitional diaconate May 20, called Father Lyons forward. Father Thomas Servatius, diocesan Director of Seminarian Formation, then presented Father Lyons as a candidate worthy of ordination. Bishop Cunningham elected him to the Order of the Priesthood to spirited applause from the congregation.

Bishop Cunningham then offered a homily crafted especially for Father Lyons, reflecting on the theme of service.

“Matthew, a priest is called to serve in imitation of Christ. In all things, you must seek to share in the pattern of His death so that you may experience the power of His glorious resurrection…. You are ordained, Matthew, to serve, not to lord it over others or jockey for the position of ‘greatest.’ Imitate Jesus who said, ‘I am among you as one who serves,’” Bishop Cunningham instructed. (Read his full homily on page 3 of this issue.)

After declaring himself willing to be ordained a priest, Father Lyons placed his hands in Bishop Cunningham’s, promising respect and obedience to the bishop and his successors. He then prostrated himself in the sanctuary as those gathered sang the Litany of Supplication.

Bishop Cunningham then laid his hands on Father Lyons’ head and prayed in silence, a sign of consecration to the Order of the Priesthood. One by one, the priests gathered did the same. With hands outstretched, the bishop then offered the Prayer of Ordination, asking that Father Lyons be a worthy coworker with the Order of Priests.

Father Lyons was vested in the stole and chasuble of a priest by Father Opondo-Owora and Father Peter Tassini, who was ordained a priest of the diocese last June and who studied with Father Lyons in seminary.

Bishop Cunningham received the gifts from Father Lyons’ parents, Thomas and Nancy. He then presented the paten with the host and the chalice with unconsecrated wine to Father Lyons.

The Rite of Ordination ended with Bishop Cunningham and clergy members each embracing Father Lyons in a Sign of Peace.

Father Lyons concelebrated the remainder of the Mass, which concluded with Bishop Cunningham offering words of thanks to Father Lyons’ family and those involved with his formation. (Both Bishop Cunningham and Holy Cross Pastor Msgr. J. Robert Yeazel also offered some humorous words in reference to the brief tripping of the fire alarm during the Mass. “Matthew, you are so aflame with God’s love that you got the fire department here,” Msgr. Yeazel quipped.)

Following Mass, Father Lyons offered blessings to a long line of well-wishers; his parents received the first blessing. Both expressed their excitement and happiness before the Mass began, noting their son’s ordination was “a big accomplishment for him.”

For his part, Father Lyons declared himself “very blessed” and his assignment — as parochial vicar of Holy Family Parish in Fairmount — great.

The pastor there, Father John Manno, said he was looking forward to Father Lyons’ arrival in July. Father Lyons is a quiet, introspective, holy person, he said, and he will “bring that gift of his spirituality to the people of the parish.”

Father Tassini had similar words about his friend and newest brother priest. “He’ll be of great service to the Church because he’s always been focused on Jesus,” he said.