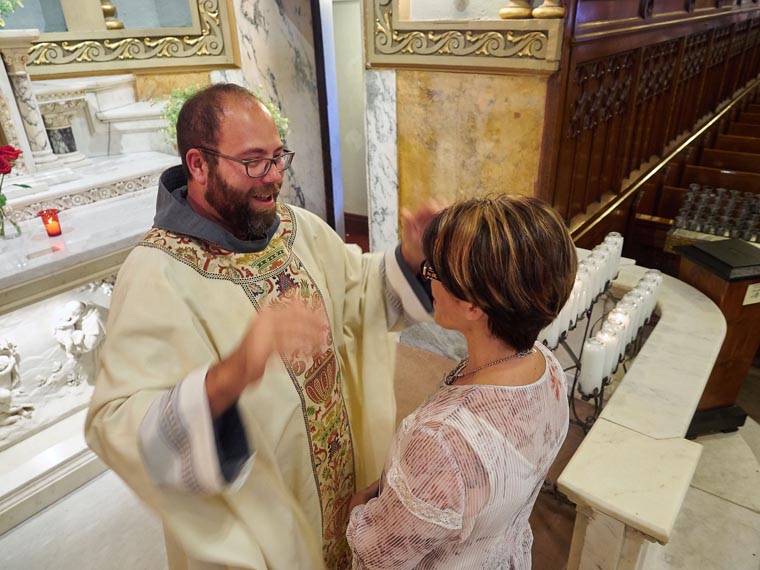 Not all cakes are layered with love.

Father Nicholas Carmelo Spano, OFM Conv., once thought of being a chef, but he sensed a certain flatness on the campus of a culinary institute that he toured. One woman frosted a cake with a buttercream basket-weave pattern. She was the only student who looked happy.

Instantly, Father Nick took a pass on the cake career. “That was a grace-filled moment when I saw that,” he recalled. “I definitely did not have that acuity then.”

Oh, but he did, and he had it again. Years later, he taught high school for four months. He summed up: “I am not called to be a teacher or work in high school ministry.”

His frosted-cake moments of insight have led to this: his ordination as a Franciscan priest May 27 at Franciscan Church of the Assumption in Syracuse. He will now resume his ministry at a Brooklyn church that he has been serving since 2014.

He grew up in a middle-class family in Mechanicville, a little south of Saratoga. He attended La Salle Institute, a Troy school that at the time was staffed by the Christian Brothers.

Then came the tour of the culinary school at the site of a former seminary with the remnants of the Jesuit coat of arms on the floor. “That’s when I decided I want to study theology and go into ministry,” he said.

Cooking certainly aligns with the Christian lifestyle, he said, but he wanted his career to have more substance than a sponge cake.

So he entered Siena College in September of 1999, and in the summer of 2000 he left Siena and entered the Franciscan friars’ house of initial formation in Philadelphia, Pa. Father Nick attended La Salle University for two years and then spent one year at the Franciscans’ novitiate in Mishawaka, Ind.

He professed simple vows on Aug. 2, 2003, and then moved back to Philadelphia to finish his undergraduate studies. He received a double bachelor’s degree in philosophy and religious studies in 2004.

Next he moved to Washington, D.C., where he earned his master of divinity degree from Washington Theological Union in 2009.

During his studies in Washington, he made his solemn vows. He also served one year of pastoral supervised ministry as a chaplain at St. Elizabeth’s Hospital, a psychiatric facility. “That year was probably one of the most transformative years of all my studies,” he said.

There he met one of the great mentors of his life, Baptist minister Vicky Cowell, the department supervisor for chaplains. She told him that listening was the greatest thing he could do, and if he treated people with dignity and love, his work would be accomplished.

Her words formed the “cornerstone and backbone” of his ministry.

Father Nick next spent three months in Franciscan ministry in Buffalo, and in September 2009 he moved to the Franciscans’ provincial house in Rensselaer, N.Y., where he ministered to the senior friars. Again, he found a great mentor: the guardian, or superior, of the house, “who in an amazing and grace-filled way is really the most caring friar I’ve ever seen. His basic premise was showing people dignity, respect, and love.”

During that year he worked as a teacher at his alma mater, La Salle Institute, down the street from the provincial house. “God wasn’t calling me to be a teacher,” he said. But he followed a chef’s instincts and sampled it. And he realized that knowing which careers to reject is “a wonderful gift and a wonderful grace.”

Franciscans are given their assignments every four years, so in the spring of 2010 Father Nick was sent to Assumption in Syracuse to work in the food pantry and soup kitchen. “I think it brought the suffering of the poor to the forefront of my consciousness,” he said.

Happily, though, his love for baking came back into the picture, and devoted volunteers helped him sell his Fat Friar cookies to raise money for the soup kitchen. “I found that to be exceptionally life-giving,” he said.

Then in July 2014 his minister provincial assigned Father Nick to reopen and build up a church in Greenpoint, Brooklyn, for the sake of evangelization of the hipster and millennial generation.

Projects so far at San Damiano Mission at Holy Family Church have included refurbishing the church and restoring the pipe organ. The neighborhood has many musicians, and three of them compose music for the organ; up to 400 people attend the concerts.

“It’s a very interesting ministry because we have a phenomenal rapport with people,” Father Nick said. People drop in for confession or a Mass card or just to talk to the friars, he said. He works with Father Raphael Zwolenkiewicz, OFM Conv.

Father Spano’s great mentors include the famous chef Julia Child. He read her autobiography and felt a kinship because he said she wasn’t taken seriously when she first studied at Le Cordon Bleu. He loved her perseverance, personality, and grace. In his own life, he said, there were people who didn’t think he’d last three weeks in the friars.

Chef Child died on the date of his final vows. Father Nick, the noted baker, looks forward to meeting her in heaven.