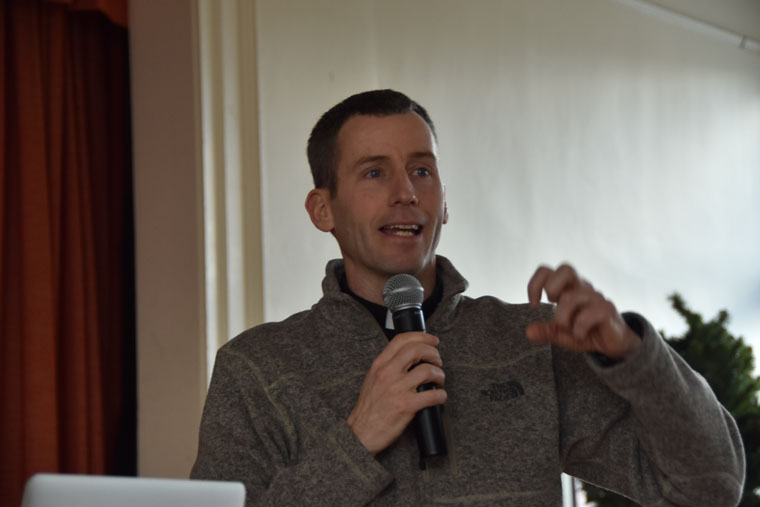 People should slow down, be humble, and act as a bridge for God, says Father Joseph O’Connor.

“Our fast-paced thinking can be wrong,” said Father O’Connor, who cited the book “Thinking, Fast and Slow,” by Nobel laureate Daniel Kahneman.

Father O’Connor is the pastor of St. Elizabeth Ann Seton Church in Baldwinsville. He grew up as a member of Most Holy Rosary Parish in Syracuse and went on to Bishop Ludden High School and Franciscan University at Steubenville. In 2005, he was ordained to the priesthood. He has influenced many young people as the diocesan director of vocation promotion. He also enjoys triathlons, golfing, and spending time with his family.

In addition to slowing down, Father O’Connor said, people should adopt a “posture of humility.”

He showed a video clip of a basketball player pounding his chest in “self-aggrandizement.” But as an example of humility, Father O’Connor cited Luke 18:9-14 — The Parable of the Pharisee and the Tax Collector, which includes these lines:

“The tax collector stood off at a distance and would not even raise his eyes to heaven but beat his breast and prayed, ‘O God, be merciful to me a sinner.’ … Everyone who exalts himself will be humbled, and the one who humbles himself will be exalted.”

Referring to a wordonfire.org entry by Father Billy Swan of Ireland, Father O’Connor said his own vocation  involves being “for a short time just a bridge for somebody else. I’m just an opportunity for them to meet God.”

He also cited a poem by Henri-Dominique Lacordaire, who lived in the 19th century:

“To teach and to pardon, console and bless always.

My God, what a life;

And it is yours,

Asked what he learned from Father O’Connor’s talk, Justin Bartlett, diocesan information systems manager, said, “Take time to reflect on your way of thinking; slow down how you think.”

Saundra Macidyn, administrative assistant for the Foundation of the Roman Catholic Diocese of Syracuse, said this is what Father O’Connor’s talk meant to her:

“We don’t have to do anything for God. But he would like us to build a relationship with him. The world is going so fast that we need to slow down, kick off our shoes, and just ‘be.’ Be silent with the Lord. He wants us to believe without seeing. We need to surrender and let go of obstacles in our lives that lead us to stray away from him. Think things through before you speak or make harsh decisions. Make the decision a prayerful decision.”

She added: “Humility is one of the important virtues every Catholic must have. You should look at others more significantly than yourself. … Priests can and want to lead others to Jesus. … Priests can help us understand sin and grace that enter our lives; we too need to repent and forgive others to know the mercy of God.”

She also appreciated Father O’Connor’s theme of slowing down: “It just reminds me of what I have to tell myself frequently during the day: Pause. Breathe in, breathe out.”

Father O’Connor’s message about being a bridge reminded Sister Laura of a poem she wrote earlier this year, “We Are Family”:

Within me
many families reside
wrapping me
in ever-widening circles
of relationship.
Over time and space
from coast to coast
spanning continents
crossing oceans
we breathe
the same air.
Interconnected
in ways beyond
our imagining
we are one.