Father O’Connor goes the distance in ‘Gratitude for Hope’ 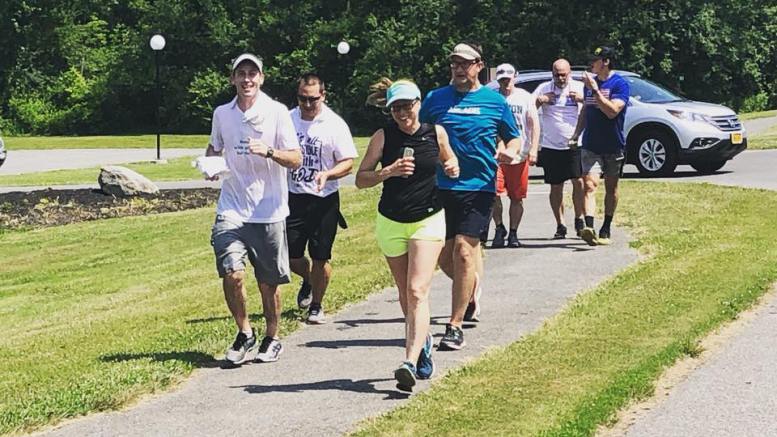 With support from and in gratitude to parishioners, St. Elizabeth Ann Seton’s pastor runs 12+ miles in 91-degree heat to honor HOPE Appeal efforts

BALDWINSVILLE — In May, St. Elizabeth Ann Seton Pastor Father Joe O’Connor issued a challenge to the parish: Meet our HOPE Appeal goal of $61,579 by June 30 and I’ll run that number of feet — a trek totaling more than 11 miles.

“The weekend I announced it, I showed the HOPE Appeal video, I talked about this challenge, this goal, and [the parishioners] applauded at Mass. They applauded! So they were in it from the start,” Father O’Connor said. 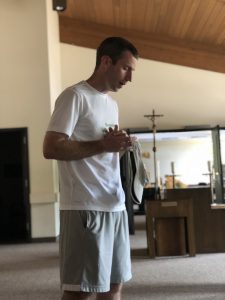 Father Joe O’Connor offers a prayer before setting off on his run. (Sun photo | Katherine Long)

With about 75 percent of the parish goal donated and pledged, Father O’Connor made good on the challenge July 1 — despite the blazing 91-degree heat and an additional 3,500 feet to be tackled.

“As I drew the course up, trying to connect each of our neighborhoods around the rivers and the highways and byways, I realized I had to go a little bit longer,” Father O’Connor explained before lacing up his sneakers. “But that’s in anticipation that we will collect more dollars and I should run more feet to honor that.”

Father O’Connor will mark one year as St. Elizabeth’s pastor Aug. 28. He dreamed up the challenge as he approached his first HOPE Appeal campaign at the parish.

Noticing that the parish had typically met its goal late in the year, “I wanted to do something to draw people’s attention to doing it earlier,” Father O’Connor said.

Two things came to mind: First, the parish’s weekly custom of placing offertory envelopes in the collection box at the entrance of the church. That practice underscores that “we owe our first fruits to God, not what’s left at the end,” Father O’Connor explained.

Second, “a way to show them that I was with them in this sacrifice,” he said. Shaving his head or bringing in a dunk tank would have been fun, “but I really felt the challenge of a run would involve a little bit of sacrifice.”

An avid runner and Ironman alum, Father O’Connor said he knew he could handle the distance. “What’s become a gift, actually, is the people who want to run with me have invited me to make sure it’s just a run and not a race. It’s not a personal best; it’s just an opportunity to run this distance and enjoy the people in the parish,” he said.

The intense heat, on the other hand, was a wild card.

“The heat became the story in people’s minds the last day and a half,” Father O’Connor said with a laugh. “I don’t want the heat to steal the story, though. It’s really about us being grateful for the HOPE Appeal, what it does in our larger diocese and community, and how these people have been generous to reach [the parish goal]. I’m just running to thank them.”

Mindful of the heat, parishioners and neighbors set up water stops every few miles along the course, which traced the parish’s boundaries and totaled more than 12 miles. Father O’Connor was also accompanied by parishioners throughout the run, with a core group running the full route and many others joining in on parts of the course.

Kerri Howell and her young daughters, Maria and Lucia Ganci, planned to tackle the first mile alongside their pastor.

“I think it’s great team-building for the parish,” Howell said before setting off. “And when you think about what Jesus Christ did — He carried a cross and some people helped him along the way. [Father O’Connor] is our [parish] Father, and we should help him along the way.”

Thanks to their support and that of many others, Father O’Connor successfully completed the run in under three hours.

“There were water stops and people cheering us on throughout the route,” he told the Sun in an email after crossing the finish line. “The kids were great — hitting us with Super Soakers and water balloons. There were a few ‘road marshals’ who drove the whole way with us to make sure we were safe and hydrated. Parishioners invited neighbors to put out sprinklers or provide water. It was so inspiring to see them caring for us — total strangers.”

Another refreshing moment: One of Father O’Connor’s fellow runners was training for a triathlon, so when the group reached the Seneca River he decided to dive in and swim across. “It looked so refreshing that we all decided to follow suit,” Father O’Connor said. A jet ski, originally secured to ferry runners, brought shoes and other items across the water.

No decision yet on whether this will become an annual challenge, but Father O’Connor is thankful for all the effort that went into the first endeavor.

“While the heat was tough, the run was made easy with all that support and hydration… and a slow enough pace to respect the weather. Truly, we could not have done it without all of the support we received,” Father O’Connor said.