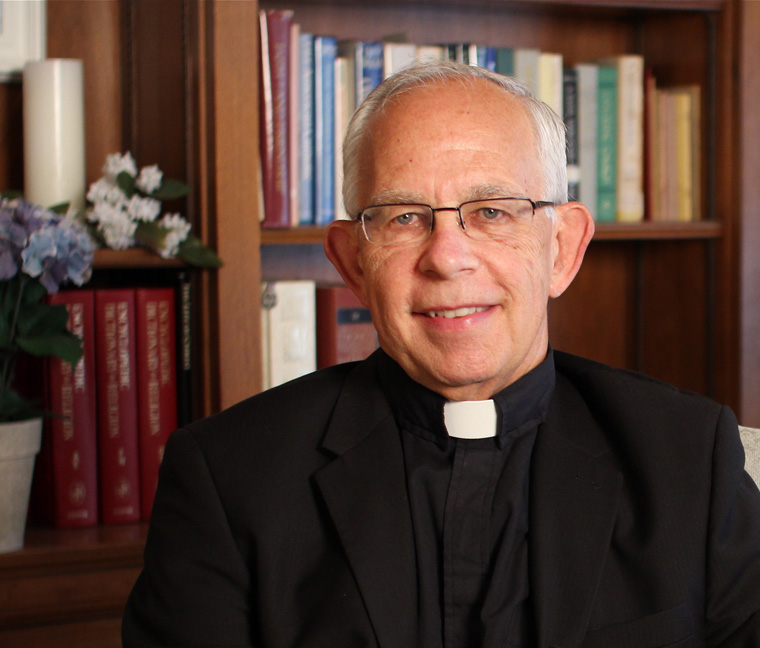 Woodsy Christ the King conference center  to get new director

He has served as the director of Christ the King Retreat and Conference Center, a woodsy, hilltop destination in Syracuse, and he has skied the slopes of the famous Killington Resort in Vermont.

“When you get out of the car you smell the pine,” he said of CTK. “It’s what the Board of Directors calls a hidden gem, an oasis in the midst of the city that has been largely undiscovered even though it’s been here for 75 years.” 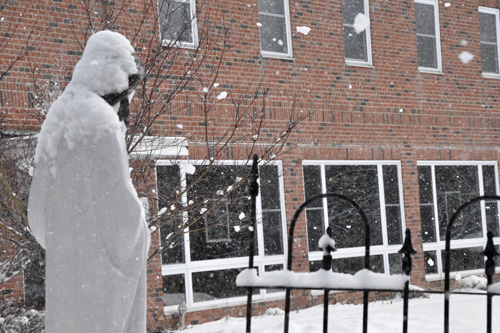 As Father Rose spoke, it was a very comfortable 70 degrees inside CTK, a neatly kept mansion with woods and pathways and statues. In the backyard, snow had filled the food basket on the little statue of St. Francis of Assisi, and a strong northwest wind blew through the tall trees. Rivaling Vermont’s Green Mountains in a small way, perhaps, the scene was “gorgeous” to Father Rose.

Father Rose has promoted a sense of peace at CTK since January 2013. But now he is retiring.

On March 12, shortly before this issue of the Sun went to print, Chris Spilka was named the new director of CTK, effective April 1. He graduated from SUNY Oswego with a degree in public relations. A youth minister at Holy Family Church in Syracuse, he has experience with planning retreats and fundraising programs for the youth and young-adult ministry.

“We are grateful for the deep gifts of spirituality Father Rose has brought to the Retreat House,” wrote Msgr. Richard M. Kopp, diocesan vicar for priests. “Over these past six years, Father Rose has also brought a wealth of understanding in selecting and attracting top-notch speakers for retreats and days of recollection.

“In addition, he has provided a great deal of spiritual comfort to all those who have visited the Retreat House. Along with the Board of Directors, he has created a sense of vision which has led to the development of many effective and attractive programs. This vision has also included fundraising which allowed significant improvements to the facility itself.” 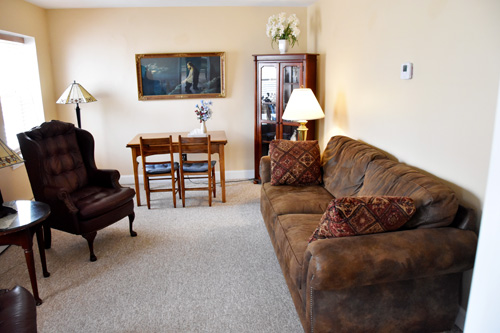 This room shows the beauty of the hilltop center, where not every retreat is a silent retreat. There is “a lot of laughter and conversation out in the dining room,” Father John Rose says.

“It’s a BIG building, it’s a BIG yard,” Father Rose noted. “And so over the last six years I’ve had some great maintenance people who have transformed this place into more of a green space, a place of hospitality, by the improvements we’ve made to the building and the number of break-out rooms we’ve established and the work we’ve done in the yard to make it a place of welcome.”

The workers, he said, have repainted the entire interior of the building and installed temperature-efficient windows and LED lighting, along with Wi-Fi for computer and smartphone users throughout the building.

“We’ve created five new double rooms,” he said, “so now we have 40 single rooms and 12 double rooms,” one of which was created out of a storage room.

Also new is an in-house hermitage, “modern-day version,” a popular place of solitude that even has a waiting list. The hermitage features a sitting room, bedroom, bathroom, microwave, and refrigerator “so people can have the experience of just being there self-contained.”

The staff, including Father Rose himself, has spent a lot of time cleaning up the yard and planting flowers that are deer resistant.

He feels that CTK, domain of deer, wild turkeys, and squirrels, gives visitors a chance to encounter God. Last week, he entreated a visitor to come and stay for a couple of days, or a day, or a half-day, or even an hour.

“It’s important to have empty space,” Father Rose said, “and not fill it all up with things or noise or clutter, but allow the emptiness to speak to us. There’s something happening in the emptiness. And so people thrive on it. They’ll come here maybe very stressed or troubled with things that are happening in their lives. And they’ll leave with a greater sense of calm.”

Nine thousand people visit CTK each year, many for the first time. They tell Father Rose: “How long has this been here, it’s so peaceful.” The only injunction is a sign by the outdoor pool: “Please do not walk on the water.” 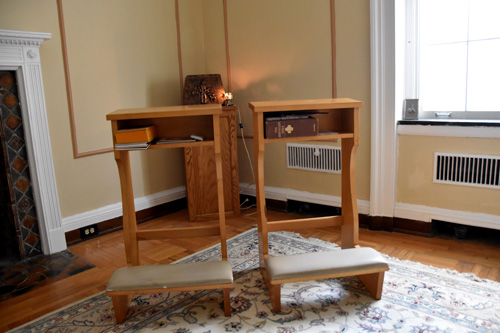 Rooms like this one help retreat-house visitors get away from the busyness of the world. “We try to journey with people,” Father John Rose says.

Pricing for conferences can be found in CTK’s Pathways newsletter, posted at ctkretreat.com.

People who wish to book a room for a private retreat are asked to call the retreat house at 315.446.2680 to check availability and pricing.

Father Rose has built on the foundation of his predecessors, including the Jesuits who were at CTK for 50 years. He espouses Ignatian spirituality (finding God in all things); Franciscan spirituality (believing everything is connected, everything belongs); and Benedictine spirituality (allowing one’s heart to lead one).

LED BY THE HEART

“Where are our hearts trying to lead us?” he said.

To help people answer that question, he holds silent retreats and silent preached retreats with national presenters on contemporary spirituality.

The weeklong retreats offer a once-a-day meeting with a spiritual director for 45 minutes or so. Through his “ministry of listening,” Father Rose shows his respect for people who are struggling with issues like these:

His tenure has also produced a spirituality-of-aging series with spring and fall sessions that bring in 25 to 40 people aged 55 to 92. They study topics related to the third and final stage of life.

“What are we being called to in our 70s, 80s, and 90s because we have more time?” Father Rose said. “So we’re being called … to cultivate and share the gifts of compassion, of forgiveness, or presence, of loving and being — discovering how to be: What’s the purpose of my life?”

Because they have more time, he said, “people in their 80s are doing their best work in terms of writing books, painting, mentoring other people of younger generations, volunteering for nonprofits, working with the poor in their parishes and soup kitchens.”

Asked how college students have a free weekend to do that, he said: “Nobody has time. You make time. There’s never enough time, but we make time for things that are important, right?”

As for encountering surprises during his tenure at CTK, he said: “I’m surprised by the deep faith of the people in this area. We have people of all faiths who come here. It’s a retreat house run by the Roman Catholic Diocese of Syracuse, but we have many Christian denominations and people of other faiths who come here. So I’m surprised and edified by the desire for people to grow in their faith.”

But now Father Rose feels a “deep call from God to let go of administrative responsibilities, and to cultivate a deeper calling to be present to God to serve.” On June 30 he will retire from his other position too: as pastor of St. Vincent de Paul Church in Syracuse.

He will still live in Syracuse, where he has some options. “That’s my network,” he said, “that’s where my friends are, my family. … There’s a shortage of priests, so I’ll be helping out at different parishes.” 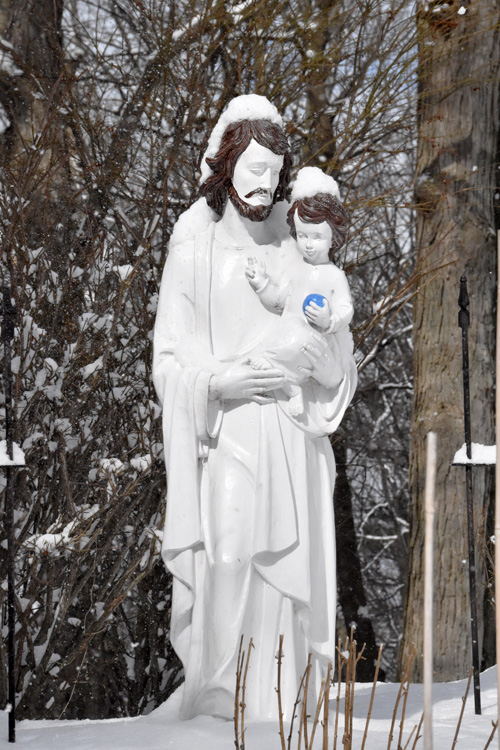 “Everybody relishes the silence” at Christ the King, says Father John Rose. He adds: “People are so hungry for silence, for quiet.”

Phyllis Mangano Egerbrecht, secretary/bookkeeper at St. Vincent de Paul Church, said in an email that it has been great working with Father Rose for six years. She cited his “devotion to the Holy Mass and sacraments, and the sharing of these with us. … Ski slopes, look out — he’s coming. ‘You gotta do what you gotta do!’”

His colleagues at CTK also saluted him.

“He’s made a lot of updates and improvements at the retreat house and he’s taken us in a forward direction,” said Barb Shepard, the marketing coordinator. She added that he is an excellent listener who spends a lot of time strategizing with the staff.

Judy Carr, CTK’s guest-relations coordinator, remembers when Father Rose served as associate pastor at St. Charles in Syracuse and pastor at St. Augustine in Baldwinsville. “He’s a people priest,” she said. “He puts people first. … I work here mostly weekends … and he always tries to come up and have lunch with the groups.”

“He gets excited about meeting new people and connecting with people, and this is a great place to connect with people,” Carr added. “He’s like the gracious innkeeper who comes and greets people when they’re having a meal. Also he’s wonderful with groups that come for the day for presentations. He’s happy to do that, I think — connect with people spiritually. … It’s all about hospitality.”

Carr said Father Rose was also an “amazing pastor.” She remembers a workshop at which he had people sit in a circle instead of in the pews, because the Church “should be a circle rather than people sitting behind each other. … He was always big on collaborative ministry, everyone ministering to everybody else.” 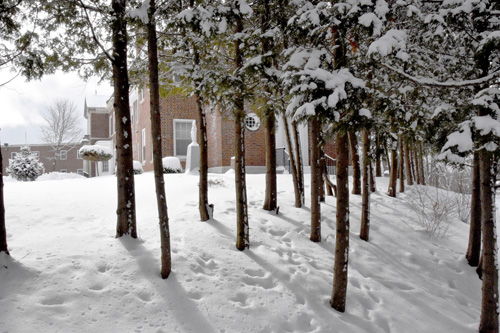 When he retires soon, Father John Rose says he will still do retreat work and spiritual direction and find out where God might be leading him.

Stephen Meier, the retreat house’s facility director, is going on his fifth year working with Father Rose. “He’s been the greatest,” Meier said. “I’m not looking for him to retire. … I wish he was staying.”

He added: “We fixed and repaired everything,” also crediting his partner, maintenance supervisor Richard Abbott.

They have added bedrooms and 65 new windows. Other work includes six new anti-scalding valves in dorm showers and a new ceiling in the Assisi Room for conferences.

“When people come here,” Meier said, “they enjoy it and they all want to come back. … They come here to get away, to just enjoy God.”

The grounds will be more navigable soon.

“Two weeks from now,” Father Rose said, “the snow will be off the walkways.”