Father Rose, the workhorse, gets a warm sendoff 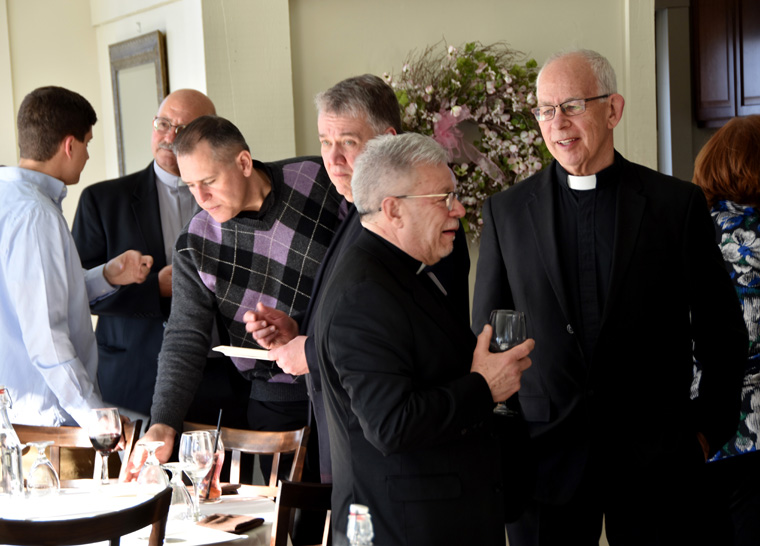 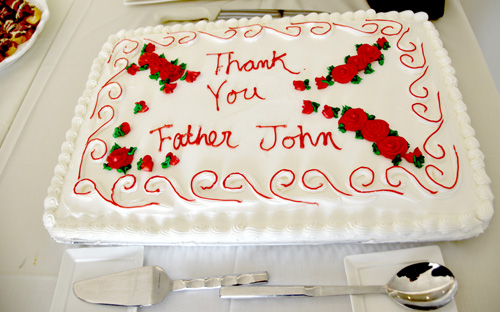 Appropriately, Father John F. Rose’s cake for his party is decorated with roses. “I’m just grateful for everybody sharing their gifts,” he says. “That’s what makes it worth it — when you work with people who are very caring and committed.”

Tireless leader of  CTK looks back at ‘life-giving stuff’

Known as tireless, Father Rose on March 31 retired after six years as the Syracuse mansion’s director. What will his pursuits include now, other than bicycling and downhill skiing?

He certainly enjoyed his retirement party March 26 at The Chop House on Waring in Syracuse; the room glowed with sunlight as Father Rose mingled with everyone: “I loved the party, it was outstanding, you know?”

A busy man, he has to stagger his retirement parties: On June 30, Father Rose retires as pastor of St. Vincent de Paul Church in Syracuse. But he hopes to continue doing spiritual direction at CTK “if the new guy lets me in there.”

That will be Chris Spilka, the new director, who has served as a youth minister at Holy Family Church in Syracuse, where he has experience with planning retreats and fundraising programs for the youth and young-adult ministry.

Joseph Geglia, CTK’s chairman of the board, said the board interviewed about 15 candidates, and Spilka “had the one thing we couldn’t train into him; we can train him in finance, we can train him in management, we can do all that. But we couldn’t give him the passion and the enthusiasm that he’s bringing to this job, and that’s what sold it for me. … He’s got it in spades.”

It mirrors Father Rose’s approach as he built on the work of his predecessors. The Jesuits ran CTK for 50 years and sold it to the Syracuse diocese for one dollar.

“I’m gonna so miss him,” said Barb Shepard, CTK’s marketing coordinator. “He has added so much to the retreat house.”

Workers have repainted the entire interior of the building and installed new windows and LED lighting, along with Wi-Fi for computer and smartphone users. They have also added five new double rooms and a hermitage with sitting room, bedroom, bathroom, microwave, and refrigerator.

As for retreats and conferences, Father Rose and his staff have weekends booked for two years in advance, although there are openings for weekdays. In the last couple of years, he said, he has seen an uptick in people looking for quiet time, silence, solitude.

“In all of our retreats,” he said, “the amazing thing for me is just journeying either one-on-one or as a group of people who come for prayer experiences and talking about their experiences with God. … And this stuff might not make the front page, but it’s life-giving stuff.”

That’s exactly what board Chairman Geglia experienced at a men’s retreat hosted by Father Rose a couple of years ago at CTK.

“It was a contemplative retreat with a lot of eyes-closed meditation-type prayer,” he recalled, “and it relaxed the heck out of me, and I was glad that I went and got a lot out of it. He has a calming influence on people, and he just has a way about him that I don’t even know if I can describe it. But it’s peaceful.”

“John Rose has been a faithful companion and one of the most welcoming presences of the clergy I’ve had in Central New York.”

The chairman said people should think of CTK as a “very inexpensive” all-inclusive destination: “You pay one fee and you get breakfast, lunch, dinner, snacks, and a retreat that is all-inclusive. It is cheap.”

Pricing for conferences can be found in CTK’s Pathways newsletter, posted at ctkretreat.com. People who wish to book a room for a private retreat are asked to call the retreat house at 315.446.2680 to check for availability and pricing.

Asked about plans for the retreat house, Chairman Geglia said, “It’s a beautiful facility, it’s a tremendous asset, and it can be the cornerstone of a lot of good work that can occur elsewhere. So I think the spiritual work that we can provide to other people where they are will be the growth of the organization. I think that’s the way we’ll grow it.” That could include off-site retreats in locales such as Binghamton or Utica or North Syracuse.

Among the priests whom Father Rose thanked for attending his party was Father Gerry Waterman, OFM Conv., the Catholic chaplain at Syracuse University.

“John Rose has been a faithful companion and one of the most welcoming presences of the clergy I’ve had in Central New York,” said Father Waterman, who came to SU from Elon University in North Carolina in 2016. “I mean that with all my heart. We have been friends since I arrived. …

“John welcomed me with open arms to the diocese, so we probably go to dinner once every month or every other month to share some food. … So we’ve been long-term friends. And I think he’s one of the most welcoming, hospitable priests that I have ever met.”

He added: “He’s kind of like my mentor. His hospitality is very Franciscanesque. Our charism is hospitality, and John embodies it very well. He does have a Franciscan charism.”

Margaret Martin, who served on the board for CTK, said Father Rose “always wanted to get everything done; everything was right. … He is by far the best priest I’ve ever met.”

Father Rose’s birthday is April Fools’ Day. He kidded that he might be told: “Surprise! This really wasn’t a retirement party!”

Chairman Geglia actually did come out with a surprise for Father Rose:

“The board at our last meeting decided that in his honor and for all the great things he’s done at Christ the King, we are going to dedicate one of our outdoor areas in his name, so it will become the Rose Garden.”