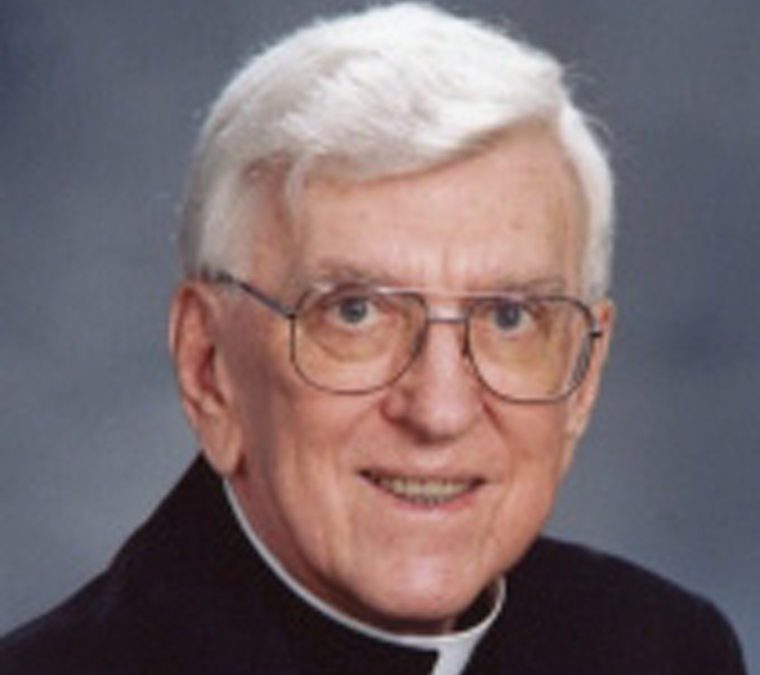 The life and ministry of Father William P. Regan were celebrated at a funeral Mass at St. James Church in Syracuse Jan. 28. Father Regan died Jan. 22.

A native of Syracuse, Father Regan was the son of the late William and Dorothy Regan. Following service in the U.S. Navy during World War II, he attended Le Moyne College in Syracuse and St. Bernard’s Seminary in Rochester for graduate studies in theology.

“How to describe Bill Regan?” Father Carmola asked. He drew from a poem about the Irish, noting, “When I read this, I’m sure you’ll recognize Bill.”

“What can I say about the Irish? They’re utterly impractical, never predictable. Strange blend of shyness, pride and conceit, and stubborn [refusal] to bow in defeat. He’s spoiling and ready to argue and fight, yet the smile of a child fills his soul with delight. He’s wild and he’s gentle. He’s good and he’s bad. He’s proud and he’s humble. He’s happy and sad. He’s enamored with beauty wherever it lies. He’s a victor and victim, a star and a clod. But mostly he’s Irish, in love with his God.”

“Certainly those who knew Bill well knew that those characteristics describe him as an Irishman, as a person who had deep feelings and deep interests and deep beliefs,” Father Carmola said.

Father Regan was also a wonderful confessor, Father Carmola said. “Bill had compassion and an ability to make people feel forgiven and loved,” he said, adding that parishioners in Pompey would say that, in Confession with Father Regan, “you felt you had met Christ.”

He learned compassion from his own struggles, his own confusion, his own pain, Father Carmola said. He brought that compassion to his life of service as a priest.

Father Carmola speculated that Father Regan wanted him to deliver the homily “because he knew I had seen a part of him that many people did not see.” Father Carmola recalled the years he lived in the same apartment complex as Father Regan’s mother, and how he watched Father Regan tenderly care for her week after week, year after year. “He had that heart of love,” he said.

After his parents’ deaths, and with no siblings, Father Regan wondered who would care for him in his final years, Father Carmola said. He commended Father John Roark for being that person, for being a friend, brother, caretaker and support to Father Regan and “an example to all of us” of fraternity and brotherly love.

Recalling the words of Martin Luther King, Jr., who said that, at his death, he wanted just to “leave a committed life behind,” Father Carmola said, “Bill, you’ve done that.”