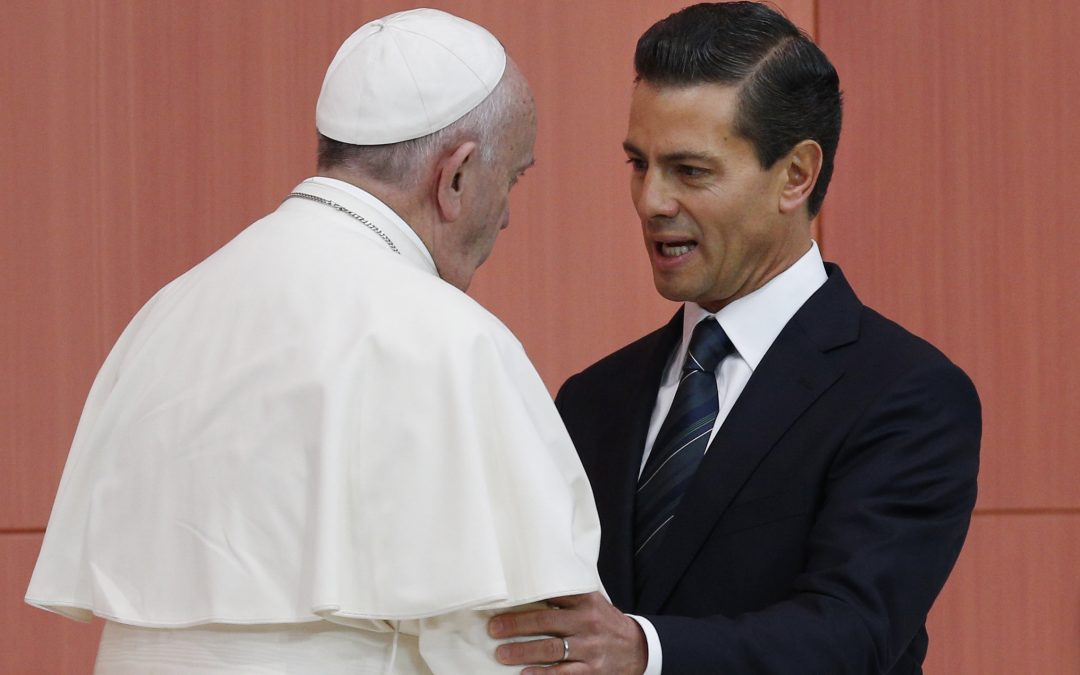 MEXICO CITY (CNS) — Pope Francis told Mexico’s president and government officials that the country’s future can be bright only if government and business leaders put an end to a culture of “favors” for the influential and scraps for the poor.

“Experience teaches us that each time we seek the path of privileges or benefits for a few to the detriment of the good of all, sooner or later the life of society becomes a fertile soil for corruption, drug trade, exclusion of different cultures, violence and also human trafficking, kidnapping and death, bringing suffering and slowing down development,” the pope said Feb. 13 during a meeting with the leaders at the National Palace.

The pope had landed in Mexico the evening before for a six-day visit. Because of the late hour and the long flight from Rome via Cuba, the official welcoming ceremony was scheduled for the next morning. But that did not stop thousands of Mexicans from packing stadium-type stands at the airport to welcome the pope with singing, dancing and a mariachi band.

Thousands of people also lined the streets from the airport to the Vatican nunciature, where the pope was staying, and a large crowd was gathered there to greet him.

Pope Francis, stopping outside for a while, told them, “Tonight, do not forget to look at Mary and think of the people we love and those who do not love us.” He said good night after leading them in the recitation of the Hail Mary.

Before the trip, the pope repeatedly spoke of his devotion to Our Lady of Guadalupe and his desire to spend time in prayer before the tilma or cloak imprinted with the image of Mary.

Pope Francis gave President Enrique Pena Nieto a mosaic of Our Lady of Guadalupe made by the Vatican Mosaic Studio; it includes tiny glass tiles that encase gold leaf.

Although protocol dictated the pope’s time at the palace be treated as a state visit, Pena Nieto told the pope, “Your visit transcends an encounter between two states; it is the encounter of a people with its faith.”

“You will find a generous and hospitable people,” the president told him, “a people who are Guadalupan.”

Speaking to the president and government officials, the pope insisted that, like Mary, who took on the traits of Mexico’s indigenous peoples in a sign of respect, Mexico’s leaders must value the multicultural makeup of its people.

Mexico’s “ancestral culture” combined with the youth of its population “should be a stimulus to find new forms of dialogue, negotiation and bridges that can lead us on the way of committed solidarity,” the pope said.

Those who identify themselves as Christian must be exemplars of dialogue and solidarity, he said, and those who truly value politics as public service must as well. There is no other way, the pope said, to build “a society in which no one feels like a victim of the culture of waste” and, therefore, disposable.

Mexico’s population is about 120 million; 28 percent of them are 14 years old or younger and another 18 percent are 15-24 years old. The Organization for Economic Cooperation and Development ranks Mexico as one of the countries with the greatest income inequality and reports 21 percent of its population lives in poverty.

Pope Francis told government leaders that those young people are a treasure, a bundle of energy and hope for the future. But the country cannot realize that future hope if the current generation of adults and leaders do not teach values and, especially, if they do not live them.

“A hope-filled future is forged in a present made up of men and women who are upright, honest and capable of working for the common good,” the pope said, adding that, unfortunately, today the common good “is not in such great demand.”

With dialogue and respect, he said, all Mexicans can be helped to contribute to building a better society where there is “real access” to necessary material and spiritual goods: “adequate housing, dignified employment, food, true justice, effective security, a healthy and peaceful environment.”