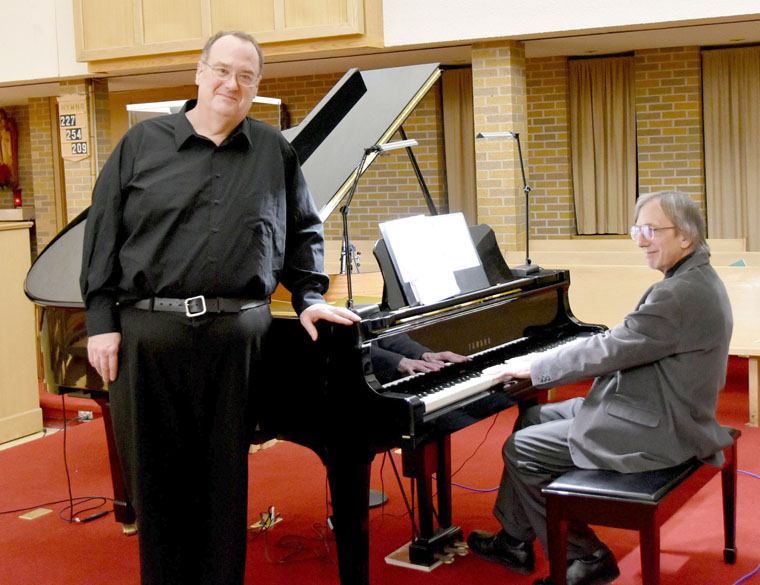 There is mystery in the Mass, and also in the music.

“Music has the power to affect people in ways that they don’t even understand, they just start feeling certain ways,” said trumpeter Aaron DuBois, who played on Christmas Day at St. Daniel Church in Syracuse. “They may not be able to put it into words, but … as a church musician you’re offering up your talent … back to God.”

“I know all of the local musicians,” said St. Daniel’s Music Director, Choir Director, and Cantor Jonathan English. And congregants and viewers of St. Daniel’s livestreamed Masses have been treated to many of their performances.

Thanks to English, performers lately have included DuBois, 21, whose family belongs to St. Mary of the Assumption in Baldwinsville; Laura Enslin, whom English called “one of the finest sopranos in Central York”; classical guitarist Kenneth Meyer; classical pianist Sar-Shalom Strong, whose official titles at Hamilton College include Lecturer in Piano; and Sar-Shalom’s brother, Shem Guibbory, a member of the first-violin section for the Metropolitan Opera Orchestra. St. Daniel’s regular organist is Wayne Skinner (“we’re very lucky to have him”).

English credited St. Daniel’s pastor, Msgr. Eugene M. Yennock, who is recovering from an illness. “Monsignor lets us do such a wide variety — it’s really kind of amazing,” he said. If the day calls for an American spiritual or the “Salve Regina,” then that’s what English does.

“He’s constantly sending me links to music that he finds,” sometimes even at 1 in the morning, English said.

People tuning in to the livestream, English said, can experience a high-level musical variety “spanning hundreds and hundreds of years — because we’ve had brand-new songs premiered at the church, and we’ve had some of the oldest in Catholic history. So it’s a broad, broad spectrum.”

DuBois, a senior at the Rice University Shepherd School of Music in Houston, started playing the trumpet in the sixth grade. He comes home for the holidays and plays at St. Daniel’s, St. Mary’s, St. John the Baptist/Holy Trinity in Syracuse, and Church of Our Lady of Pompei–St. Peter in Syracuse. Aaron’s younger brother, William, an accounting major at the University at Buffalo and a member of the Army Reserve, plays the trumpet occasionally at St. Mary’s and is a member of the 198th Army Band in Rochester.

“No question in my mind he’s going to be one of the most influential trumpet players of his generation,” English said of Aaron. “He’s just amazing.”

On Christmas Day at St. Daniel’s, Aaron played tunes including “Joy to the World,” “O Come, All Ye Faithful,” “God Rest You Merry, Gentlemen,” and “What Child Is This.”

“I get my workout in every time I come home from school and play during Christmas,” Aaron said. “I love it.” He has played enough with St. Daniel’s organist Skinner, he said, that they can change things on the fly.

DuBois wants to play for professional orchestras or similar ensembles someday, and he has passed the first round of all the graduate schools that he has applied to.

“Obviously you want to be able to finger quickly during technical passages and whatnot,” he said, “but the main thing that we train for is getting a beautiful clarity” in the sound of the instrument.

So much to convey

“‘Taps,’” he said, “is pretty easy technically, but it’s super, super, super difficult to do correctly, because you’re conveying so many things emotionally.” That song, he said, is a “case in point as to why musicianship and artistry and emotions are far more important than technique.”

English, a tenor, has performed many times with Strong. “He is one of the finest pianists in Central New York, there’s no question,” English said. Strong, Guibbory, English, and Skinner performed during the livestreamed Mass for the Solemnity of the Epiphany at St. Daniel’s. At the end of Mass, brothers Strong and Guibbory (basically the same last name; “Guibbory” means “Strong” in Hebrew) performed Bach’s Sonata No. 2.

Pianist Strong looks a little like Leonard Nimoy, who played Mr. Spock on TV and in movies. “I have been told that,” he said, “except I haven’t sharpened my ears, just my brain.”

He was the valedictorian at Utica Free Academy and moved on at age 16 to Knox College in Galesburg, Ill., where he had a double major in music and business administration. Amid the coronavirus pandemic, he has taught piano via Zoom as far away as China and Korea.

Asked about his mindset going into a church performance vs. a concert, he said:

“Not really much different. It’s just very much about doing a good job. And the fact that it’s in a church and perhaps God is listening, maybe that makes it even a little more important to do a good job.”

Regarding his satisfaction from his St. Daniel’s performance, he said with a laugh: “I survived the hard movement of the Bach!”

Does Bach ever offer an easy movement?

“Well,” he said, “let’s put it this way: Slow Bach, it may not be easy, but the notes go by at a speed where you actually can process many of them visually. A fast movement, the notes go by so fast you just have to sort of know where it’s going and have the landmarks. It’s not quite like memorizing, because that would take way, way, way more time and repetitions, but it’s like three-quarter memorizing.”

On Jan. 6, Strong recorded songs  with English at St. Daniel’s; it will be shown Feb. 3 in the Jackson Lunch Hour Series at Utica College. Tunes included “A Nightingale Sang in Berkeley Square,” “Younger than Springtime,” and “A Day in the Life of a Fool.” English acted out the parts as he sang them, and Strong showed expressiveness that Spock rarely did.

The gift of sharing

“I love sharing music,” said Strong, who is at the piano five or six hours a day, “but I want to share it as best I can and that’s my passion …, just like the pro athletes. They’re always trying to improve their game somehow. It’s the same with the musician, the professional musician. … Jon English …, he’s learning how to make his voice work as good or better than ever the older he gets!” 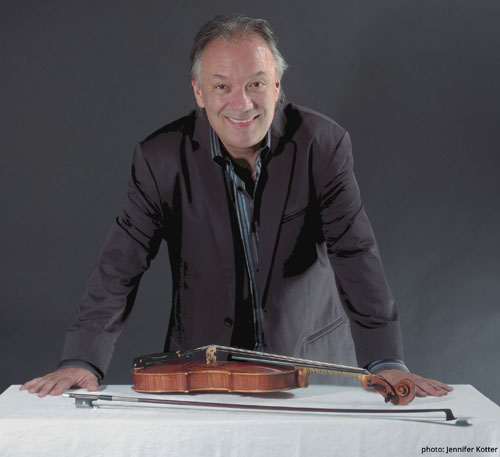 Shem Guibbory, a member of the first-violin section of the Metropolitan Opera Orchestra, performed for the Solemnity of the Epiphany at St. Daniel’s. The ideal outcome for his violin performances, he says, “is some ease of suffering or restoration of joy or transformation of spirit. … There is one music, and we play that music in different places.”

There is no trophy for that, as in sports.

“Oh no,” Strong said. “But it’s like our own personal esteem and self-pride in what we do and realizing that having a gift of sharing music is a responsibility as well.”

“Wonderful, wonderful,” Guibbory (runningwolf.cloud) said of his St. Daniel’s experience. Coming into it, he was “very cognizant that this is a worship service, so people’s focus and emotions are very specific towards reverence to God and communing with God. Now that may also be the case in the concert performance but not necessarily; they’re different things, right?

“So, for me as a player, my stance is the same for both — both are acts of worship. My ideal outcome is some ease of suffering or restoration of joy or transformation of spirit. …

He grew up in Norwalk, Conn., and now lives in Shrub Oak in Westchester County, “on the edge” of commuting distance to New York City. He said everyone is on furlough from the Met because of the coronavirus pandemic. “Lincoln Center is shut down, nothing live,” he said. But the Met’s archives are offered for free now every night, he said, “so that’s wonderful.”

What is his best memory from playing at the Met?

“At the Metropolitan Opera, there have been hundreds of performances in which I have played where 120 chorus members, 120 members of the orchestra, the solo singers, the stage crew, everybody was like one mind, one voice, one spirit, OK? When that happens, it is impossible not to recognize that as a sacred event. Because so many souls connecting with each other at a level of unity makes it a sacred event. That’s my personal view on it.”

Soprano Enslin is a soloist, recitalist, and teacher based in Central New York. She is the founder of CNY Singing Garden (http://singinggarden.org/), a studio offering private voice lessons, workshops, and small-group classes.

‘To sing for God’

“Singing any performance is an offering of something greater than myself,” she wrote in an email. “I hope to be a vessel and that which is channeled through me can offer healing to someone listening. Whether it does or not is out of my hands. The goal is to sing wholeheartedly as if it were my last chance on earth to sing. …

Aaron DuBois, whose family belongs to St. Mary of the Assumption Church in Baldwinsville, plays the trumpet on Christmas Day at St. Daniel’s. He observes that the trumpet is mentioned many times in the Bible. (Screenshot courtesy oneminutetechhelp.com)

“When I sing for places of worship my focus is to sing for God. Depending on the piece, I may or may not sing directly to the congregation as I might in a live concert hall. For my offering of [“Rejoice Greatly,” from Handel’s Messiah] in December, my vision throughout was to sing this to all people on earth, i.e. everyone in the room and beyond St. Daniel’s walls. Everyone was the ‘daughter of Zion.’

“I was asking everyone to ‘SHOUT! For behold … a righteous Savior comes to speak peace unto the heathen.’ In my mind’s eye as I sing I visualize [earthly] saviors who embodied Christ’s essence such as: Mother Teresa, Gandhi, Martin Luther King Jr., the Dalai Lama … and send thoughts of the possibility of another savior to help us through this time.

“At St. Daniel’s I was envisioning our saviors to be a successful COVID vaccine, pathways to healing for those struggling with the mental-health challenge of seclusion, food shortages solved, and peace in places of war. I desperately wanted to invoke hope in the hearts of those around me from God above. I offered my singing directly to the altar and focused on Jesus’ sacrifice and miraculous presence. …

“Singing rides on the breath. I believe breath is your soul and can carry the blessings of God to others bringing tremendous healing. When we heal our own hearts and are standing in our truth, we can then bring this to others in the world. I hope for even one domino to fall and bless another after hearing fine music given full heartedly in any house of worship.”