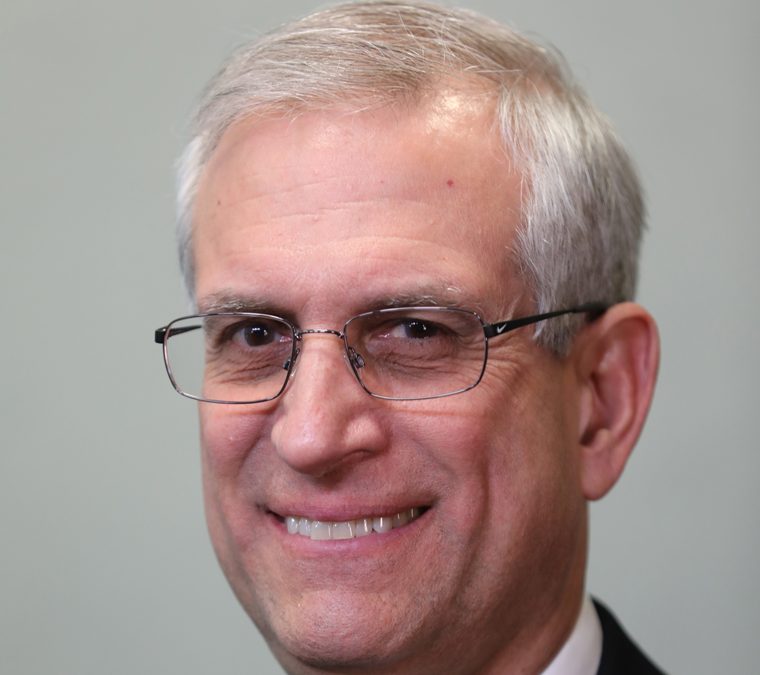 WASHINGTON (CNS) — A picture of a young Palestinian boy, with dark, soulful eyes and a bit of a dirty face, hangs on the back wall of Stephen Colecchi’s office at the U.S. Conference of Catholic Bishops in Washington.

When Colecchi looks at it, he offers a prayer for the nameless child and the Palestinian people.

“I met him in a mosque in Gaza on my first trip there (2007) and he hung around me. He kept smiling at me so I kept smiling at him,” recalled Colecchi, director of the U.S. bishops’ Office of International Justice and Peace.

“I pray for him whenever I look at his picture. I wonder if he’s still alive and doing OK.”

The boy is one of countless people Colecchi met during fact-finding trips around the world. Their struggles inspired Colecchi’s work to protect human life throughout the 14 years at the USCCB.

“The best thing about this work, in addition to working with the bishops,” he told Catholic News Service as he approached his April 30 retirement, “was you get to bring three assets of the church together: the experience of the church on the ground in every country around the world; the teaching of the church, the social teaching; and then the relationships … that help inform what you’re able to bring.”

Colleagues credit Colecchi with uncounted accomplishments even though he stayed out of the limelight.

“Steve was a delight to work with. He was a man of great wisdom, integrity and very collegial,” said retired Bishop Howard J. Hubbard of Albany, New York, who is a past chairman of the U.S. bishops’ Committee on International Justice and Peace.

The bishop credited Colecchi for doing his homework on vital issues and keeping Scripture and Catholic social teaching at the forefront of his work.

Bill O’Keefe, vice president for government relations and advocacy at Catholic Relief Services, called Colecchi a resolute partner in advocacy and a gifted friend who is at ease talking with policymakers and struggling people alike.

“The bishops and the wider church have been served incredibly well by Steve and his determined leadership on raising the voice of the church on a whole host of international issues,” O’Keefe said.

“He’s made a profound difference in shaping the U.S. policy on key issues through supporting the bishops in their role,” he added. “He combines his intellect and policy analysis with the ability to connect with people who are suffering great injustice.”

John Carr, director of the Initiative on Catholic Social Thought and Public Life at Georgetown University and former executive director of the bishops’ Department of Justice, Peace and Human Development, brought Colecchi to the USCCB in 2004. Carr credited him for his steadfast pursuit of justice, citing his leading role in securing reauthorization of the President’s Emergency Plan for AIDS Relief among other critical international aid programs.

“There are literally millions of people in Africa who are seeing their grandchildren because of his work and a lot of other people’s work on HIV/AIDS and debt relief,” Carr said.

“He is smart. He is faithful. He is persistent. He is good to work with. He is just a remarkable example of a faithful Catholic who has made a huge difference,” Carr added.

Colecchi keeps the accolades in perspective.

“The church’s teaching is neither left or right,” he told CNS. “Rather it seeks to be faithful. We should always put our moral principles ahead of our partisan political positions and be guided by faith.”

Colecchi’s commitment to peace and justice was formed early in life. Growing up in Leominster, Massachusetts, in the 1950s and 1960s, Colecchi was active in the youth group at his family’s parish, Holy Family of Nazareth.

“I really saw faith and engagement with society as going together,” he said.

At first, Colecchi thought he would do that as a priest.

As he went off to the College of the Holy Cross in nearby Worcester, his father urged him to “do at least a little dating to see if you’re really called to celibacy,” Colecchi said. In his junior year, Colecchi met his wife, Cheryl, and thoughts of the priesthood disappeared. They have been married 44 years.

The years at Holy Cross were formative in other ways. Colecchi became involved in efforts to end the Vietnam War. It was Jesuit Father Joseph J. LaBran, associate chaplain, who, after an anti-war rally, encouraged Colecchi to consider using his leadership skills to serve the Catholic Church.

Following graduation in 1973, Colecchi entered Yale Divinity School to work on a master’s degree in religion. He also worked on low-income housing needs for elderly people. “That was significant because I saw the struggles of poor, inner city elderly residents,” he said.

“He was a big influence on me, too,” Colecchi said of Father Nouwen. “He helped me understand that it was important to root myself in some spirituality, which I have never been very good at. I’ve always been more of an activist. That’s one of the things I could do better in retirement.”

With advanced degree in hand, Colecchi began his career in religious education at Northwest Catholic High School in West Hartford, Connecticut, where he connected students with outreach to elderly people. Then it was on to Virginia, the one place where Steve and Cheryl could find work together, he in parish ministry and she as a teacher.

Colecchi worked for three years at St. Joseph Church in rural Martinsville and eight years at St. Bridget Church in Richmond. As time passed, Cheryl built a career as a clinical psychologist.

By 1988, Colecchi’s skills were noticed within the Richmond Diocese. Bishop Walter F. Sullivan, a leading social justice advocate who opposed abortion as much as nuclear weapons, hired him on the spot during an interview. Colecchi became director of the Office of Justice and Peace and diocesan director of Catholic Charities.

The position also required regularly meeting with legislators on any number of concerns. He recalled his most notable legislative achievements as changes in public assistance policies affecting two-parent families and a prohibition on partial-birth abortion.

The Colecchis were not sure they wanted to move northward. They had two daughters and Cheryl’s practice was well established. It was their involvement in the Just Faith program that led them to take the risk. The yearlong program rooted in social justice concerns ends with a retreat during which participants are invited to discern how God is calling them to act on behalf of the poor.

“Together we realized we needed to take a greater risk for social justice, we needed to simplify our lives,” Colecchi recalled.

The moved turned out well. Colecchi has earned wide praise for his work and Cheryl was able to build a new practice in Washington’s Virginia suburbs. Both were to retire together and planned to return to the Richmond area.

Colecchi said he looks “forward to being a full-time grandpa and a part-time something else” in retirement. He hopes to line up work as an adviser on issues such as nuclear disarmament, world poverty and climate change.

“I think I have something to contribute still.”