What does it take for familiar faces to become friends? 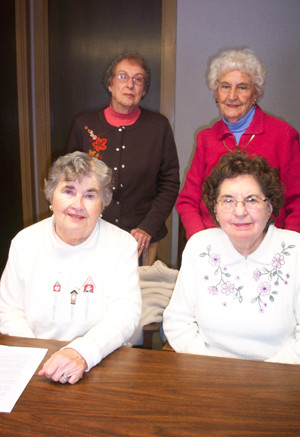 In other words, it’s taken the Most Holy Rosary Senior Club.

For 13 years, the club has served as a vibrant and vital link for seniors in the parish and beyond. There are now almost 50 members, but the club has expanded to over 100 in the past.

“Before the seniors club, you’d leave church and you’d just say hello, but now you know these people, and after church you come out and you talk and gab and it’s just wonderful,” said Cathy Dadey, a lifelong parishioner of Most Holy Rosary and, along with her husband Dick, a past president of the club.

Many of the members of the club have been parishioners of Most Holy Rosary since Eisenhower was president, and some for even longer. But being a member of the parish is not a requirement and many seniors who are in the club go to Mass in neighboring churches.

“Some members are from other parishes,” Kathleen Byrne said. “Everyone is welcome, and we’re happy to have guests.”

Byrne, a lifelong parishioner of Most Holy Rosary, is the founder, current president and tireless advocate of the club.

She was serving on the parish council and had become exasperated with how, at every meeting, somebody would say, “You know, we really ought to do something for the seniors in the parish.” But then nothing would ever come of it.

Finally, in 1997, she spoke up and said that finally something really had to be done. “We had nothing for seniors,” she said.

Father Peter Creed, then-pastor of the parish, spoke to Byrne after the meeting, and agreed to give her $200 to get the club started. “I told him it was a loan, and we gave the money back to him the next year,” she said.

Members of the club laugh as they talk of how, with a few words, Byrne is able to “volunteer” people to take part in the club’s organization.

But they also know how important a club like this can be in the lives of some of its members.

“Some of the elderly people, they live at home and they have no one to talk to,” said club member Frances Matejek. These shut-ins get visits from club members, receive gift bags at Christmas and get a monthly newsletter in the mail.

And for those who are able to get out, there is a regular schedule of meetings and outings. There is a monthly board meeting to arrange outings and arrange for speakers or entertainers to come. The first Thursday of the month there is a breakfast at Denny’s.

To kick off the year’s schedule in September (the club doesn’t meet during the summer), there’s a make-our-own-sundae day that always draws a big crowd. Then there’s also a day where Brooklyn Pickle restaurant supplies sandwiches. “You should see all the men come,” Dadey said. “It’s too funny.”

The club has chartered a bus to see “Lights on the Lake” at Christmastime, visited Our Lady of Victories Basilica in Lackawanna, and arranged for lunch at places like Pumpkin Hill Restaurant and the McKenzie Childs farmhouse in Aurora.

There have been retreats at Christ the King Retreat and Conference Center, and a Holy Year pilgrimage in 2000 brought members from Most Holy Rosary to the Cathedral of the Immaculate Conception, Assumption Church and Sacred Heart Basilica.

Some members participate in a group that prays daily for vocations.

The club also helped to coordinate the 40th anniversary party for Father Fred Mannara, pastor of Most Holy Rosary.

He attends all the meetings, cooks a big annual dinner for the club and gets them all singing at their St. Patrick’s Day celebration.

“We have so many functions going on it never gets boring,” Dadey said.

The club also works to benefit the community. In November and May of each year the club holds a paper product drive to benefit Vincent House. They plan entertainment for students at Most Holy Rosary School at Christmas, judge their art exhibits and save soup labels to help them buy equipment. They have also raised money to install a new carpet in the chapel.

“I feel one of our greatest accomplishments was the flu clinic,” Byrne said. The first clinic took place in the fall of 1998 and has remained a feature of the club’s schedule every year since then.

“Some people can’t go all over the place standing in lines,” Byrne said, so she contacted organizations who agreed to come to the parish to give out the flu shot. “We got the flu vaccine that one year when they couldn’t get it anywhere, but they honored their commitment to us,” she said.

Christine Smith, the club’s treasurer, said after she retired she wasn’t quite sure how to fill her days. Then she became involved in the club. “Now I was looking forward to something,” she said. “I like it because I’ve gotten to meet all these people in the club I didn’t know before.”

“It’s a great group of people and they’re all very willing to help,” Dadey said. During her tenure as president, she liked to end meetings with a little joke. Before long, people were coming up to her after Mass trying out some of their own material. “They would start giving me jokes or something they saw in the paper that was meaningful,” Dadey said.

“Many members have found new friendships and many have rekindled old friendships,” Byrne said.

“It’s almost like a big family,” she said. “The thing I really appreciate is that we‘re trying to help people.” For instance, she said, someone might share a ride to a meeting and then offer to drive that person to the grocery store as well. “For a lot of people, they feel like they have someone they can rely on.”